A young Lithuanian woman learns about the healing power of love in "The Summer of Sangaile," a movie that ultimately is about as shallow as that central theme sounds. It's primarily a showcase for director Alanté Kavaïté's impeccable eye for striking compositions and ability to transform ordinary locales into almost magical locations. Her screenplay, though, lingers on those transformative experiences, without first grounding them in the supposedly harsh reality that the movie's central character is trying to overcome.

This is a film in which the secret pain of the protagonist is constantly suggested but only spoken near the end of the story. We spend a lot of time observing the symptoms of Sangaile's (Julija Steponaityte) turmoil: She cuts her arms using the sharp ends of a divider. She has dreams of herself sinking into water, unable to emerge, and of a single-engine plane, seemingly out of control, spiraling toward the ground. She isolates herself from her family, potential friends and new experiences.

There is no doubt that something is woefully amiss with Sangaile. The questions then become what it is specifically and, on a dramatic level, whether or not it justifies the movie's lengthy silence on the issue.

Sangaile, a young woman in her late teens, is obsessed with planes. The movie opens with her among the audience at an airshow at the local airfield, where a plane performs death-defying stunts to the wonder of the crowd.

Auste (Aiste Dirziute), an eccentric young artist who works at the cafeteria at the nearby power plant, is selling raffle tickets to win a ride with a world-champion pilot. She gives a ticket to Sangaile, who has clearly caught Auste's eye in a way that has nothing to do with a raffle. She also picks the winning number, which happens to Sangaile's. Sangaile refuses the flight, but Auste hopes Sangaile will visit her at the cafeteria. She does, and from there, a romance blooms between them.

It's not quite as simple as that, of course, although the little hiccups along the way to the consummation of their eventual romance hint at some much deeper internal conflicts than the obstacle upon which Kavaïté finally focuses. At first, Sangaile is uncertain of her sexuality. After a day at the beach with Auste and her friends, Sangaile has sex with one of Auste's male friends in his car. There's something oddly refreshing but jarringly simplistic about the way Kavaïté dismisses this development, as Sangaile later tells the guy that there are "no hard feelings." That, as they say, is the end of that.

Another contentious subject for Sangaile is her family. Her parents are present, but they might as well be absent. Her father (Martynas Budraitis) is a quiet, distracted fellow. Her mother (Jurate Sodyte) was a ballerina, and she is stuck the past (photos of her in her prime adorn a wall of their villa home like a shrine).

In Sangaile's only moment of forthrightness before the later parts of the movie, she tells the story of the first time she cut herself, after her mother told her that she was unworthy of her name, which means "with strength." Auste helps Sangaile overcome her self-harming habit by agreeing to join her, on the condition that this session of cutting will be her last. There's a touching simplicity in the way Kavaïté shows that the agreement has been fulfilled, as Sangaile averts her eyes when Auste takes a pair of scissors to her abdomen.

These tiny details make up the bulk of the depiction of the romance between the young women. That's partially because Kavaïté's screenplay doesn't offer much of significance for these characters to say to each other, but it's also because the director is more interested in creating and framing little moments of beauty to do most of the heavy lifting.

With cinematographer Dominique Colin's sparse but evocative lighting, they are elegant, too. The women's first sexual encounter takes place in a field of tall grass, their bodies illuminated by the lights on dresses of Auste's design, which gives their coupling the sense of some merging of fantastical beings (a scene of them at play in a forest glade evokes a similar thought). Another is lit by the light shimmering from shards of glass hanging from the ceiling in Auste's bedroom.

Later, as Sangaile discovers a different kind of freedom, the movie's point of view ascends to the highest points of the town and its outskirts. Those scenes are at the heart of what Kavaïté poses as Sangaile's central dilemma, although, compared to everything else that the character has done and hinted at, the revelation is underwhelming. It's more an ironic quirk than a reasonable explanation for her troubles.

It's also a sign that "The Summer of Sangaile" isn't interested in these characters as people with any real complexity than it is in treating them as posable pieces within tableaus of pain, love and personal triumph. It's a movie of lovely surfaces that only alludes to and rarely explores what is happening beneath them. 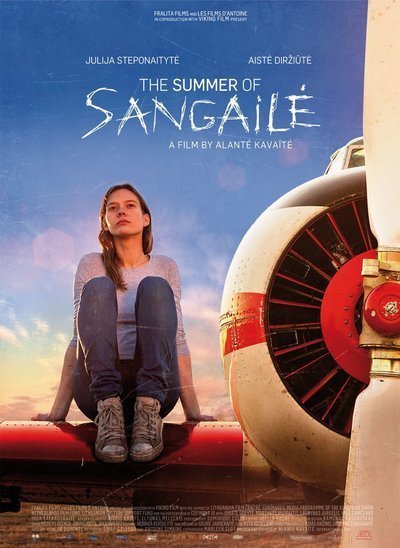