Taking place almost entirely within the claustrophobic confines of a middle-class Berlin apartment, Ramon Zurcher's debut film, "The Strange Little Cat," features a curious and alert tabby, busy scratching on doors, batting its paws at a fluttering moth, staring out the window, its tail flicking, or strolling about on the kitchen table. The cat is not strange. But the film sure is, strange and creepy and entertaining. It's like reading a short story by Chekhov or Ionesco, that was translated by Kafka (the film is very very loosely based on "Metamorphosis"), and then staged by Bertolt Brecht. Or Barnum & Bailey. The cat isn't an observer. It is a participant in the circle of family life, wrapped up in its own concerns, wanting what it wants, strolling in and out of the frame as it pleases. Up above its head, or off to the side, the droning mundane family conversations go on and on. In "The Strange Little Cat," the mundane may very well be the strangest subject of all.

From the very first shot, we are clued in that there are depths of strangeness to be plumbed in even the smallest and most banal interactions. A little girl (Mia Kasalo) sits at a kitchen table, writing something on a pad of paper, and occasionally opening her mouth to scream at the top of her lungs, timing her screams to the roar of the blender (off-camera). Grown-ups pass around her, their heads above the frame, their conversations droning and banal, not acknowledging her. What we are seeing is a regular family morning, but the framing from cinematographer Alexander Hasskerl creates an enormous amount of tension. That tension lasts throughout the film, a strength of its relatively short running time.

There is a Mother (Jenny Schily), who busies herself with food preparation, her back to the camera. The framing, again, creates tension in what is a normal everyday moment, a mother cutting fruit on the counter. But the fact that her back is turned, so often, begins to seem ominous. When she turns to look at her family gathering in the kitchen, there is an intense remote quality to her face which can be quite frightening, but you're never sure if you're projecting or not. Is she about to fly the coop? There's a disturbing moment where she looks down at the cat, eating at its food bowl, and she hovers her foot just above the cat's head, as though she is contemplating crushing it.

As the family gathers—sons, daughters, their significant others, a sick grandmother, a couple of uncles—they chat with one another, crowding through the kitchen. Someone will start speaking, sharing an event that took place over the last couple of days. The mother shares a story about going to the movies, and how the man next to her in the theatre placed his foot on top of her foot and she wasn't sure how to move her foot away. One of the older daughters shares a story about how she was walking in the park, throwing down slices of orange rind, and how strange it was that the orange part of the rind always landed face-down. These stories are related in a flat-affect tone, which makes the proceedings feel like an avant-garde theatre piece, with individual actors stepping downstage and addressing the audience directly. In some cases, the events described are shown in dreamy flashback.

All of this is quite haunting and hypnotic. The stories shared seem to have, at their crux, the feeling that the world is a completely mysterious place, where people and objects often behave in baffling ways.

The monologues continue, and people stroll in and out of the kitchen, down the dark hallway, and back, and the apartment begins to take on a life of its own. Objects start to rebel against the functions they were meant for. Buttons fall off of people's shirts. Drinks spill. The radiator has a weird echo. The washing machine is broken. A glass bottle spins on the stove. A ball flies in through the kitchen window, thrown from the courtyard below, an alarming moment when the belljar of the family dynamic is shattered by an interloper. At the family dinner later in the film, one of the fat sausages on the table squirts grease wildly when someone cuts into it, causing hilarity. The refusal of objects to behave appropriately and do what they were meant to do is reminiscent of Jacques Tati's use of that trope repeatedly, to great comedic effect, in "Playtime," where a neon sign in a drugstore suddenly becomes a halo, due to the placement of the priest below it, or fat leather chairs make embarrassing fart-sighs when people sit down on them.

There is a young son in the family, a little deadpan boy, who stands and stares at the cat scratching at a door, or at the family dog who is busy keeping his eye on the family cat, and the little boy says, vaguely, to a nearby grownup, "Is the cat/dog supposed to be doing that?" He never gets an answer. He seems to be the only one in the family who is aware that the objects around them are in out-and-out rebellion. Perhaps as a way to acknowledge that unspoken reality, he flies a little automated helicopter into the crowded kitchen, where it floats around through the grown-ups before crashing into a nearby fruit bowl. Nobody notices.

There is tension here between different family members. The little girl is slapped across the face at one point by the Mother. Mother criticizes the sounds her older daughter makes when she drinks her juice. But the tension really comes from the get-go, from the static strange framing, and the palpable sense that Zurcher and his cinematographer give that something is not quite right here.

The source of the tension remains buried, which gives "The Strange Little Cat" a Harold Pinter-type energy. Pinter wrote pauses into his scripts, pauses that actors are encouraged to follow as though they are rests in a musical score. The pauses add to the ominous sense that something is coming; something gigantic is happening beneath the placid surface. It doesn't matter that the characters are talking about washing machines and orange peels. Something is going ON. The revelation may be that "all" that is going on is the normal stresses of everyday family life, filmed in a way that highlights the airless intimacy and the devotion-to-the-banal nature of all of it; the ways we talk around each other, above each other; the way we repeatedly "miss" each other, especially when we are in such close quarters.

The only music in the film ("Pulchritude" by Thee More Shallows) is used sparingly and specifically, and it usually marks the entrance of the cat into the action, after a room has cleared. The music seems to act as a cue: the humans have left the room, the cat can breathe more freely now.

People do behave in strange ways. Objects do rebel. We do live alongside animals who have intentions and concerns of their own. Who can figure it all out? "The Strange Little Cat" doesn't provide answers, and doesn't reveal its underlying structure or mythology. The mystery is almost total. That's the fun of it. 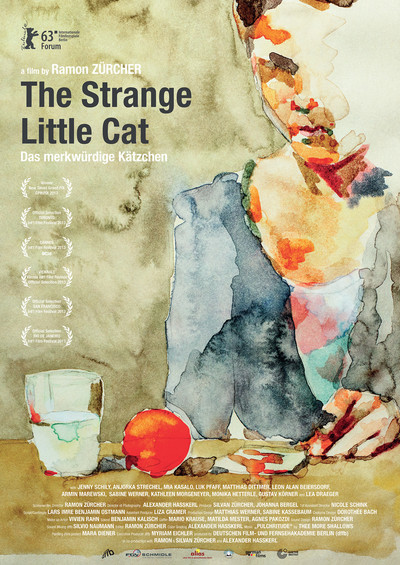