The Spy Who Dumped Me

The pairing of Mila Kunis and Kate McKinnon in an R-rated action comedy would seem like the perfect late-summer escape. Both actresses have proven for years that they’re game for whatever comes their way, and their contrasting styles held the promise of giddy, combustible chemistry. Kunis is all sly, biting deadpan; McKinnon is a wild, daring whirlwind.

The comedy isn’t (entirely) the problem in “The Spy Who Dumped Me,” which, as a title, is cleverer than the movie itself. It’s the extreme violence, which serves as a jarring contrast to the goofy antics. The killings are actually more over the top than the ones you might see in a straight-up spy movie, which I guess is the point. Ostensibly, this is simultaneously intended as a send-up of the genre as well as a straightforward example of it—a tricky feat to pull off, unless you’re Edgar Wright. Director and co-writer Susanna Fogel has trouble achieving a tonal balance between the comedy and the action, which only grows increasingly glaring over the course of the film’s overlong running time.

And then, underlying all of the characters’ globetrotting misadventures is a fundamental theme of enduring female friendship—of two women supporting one another no matter what and ultimately helping each other discover their long-elusive purpose in life. It’s a welcome idea to explore, for sure, especially from a female filmmaker during the male-driven bloat of the summer blockbuster season. But that element would have resonated more powerfully if the characters in question had been better developed. As it stands, each woman is little more than a collection of quirks—albeit, amusing ones.

Kunis and McKinnon co-star as Audrey and Morgan, best friends and roommates sharing a modest Los Angeles apartment. Audrey is a cashier at a Trader Joe’s-type grocery store; Morgan is an out-of-work actress. Audrey wanders hesitantly through life never finishing what she starts; Morgan is a born performer who lives to experience everything. But when Audrey’s boyfriend, Drew (Justin Theroux), dumps her in a text message, the two friends discover he was secretly a spy. (What they thought his day job was provides one of the better laughs in the script from Fogel and David Iserson.)

When well-armed invaders burst into their home and gun Drew down right in front of them, Audrey and Morgan realize they must carry out his mission, which takes them to Vienna, Prague, Paris, Berlin, Amsterdam and beyond. The thing they must protect and deliver to the correct hands is the most McGuffiny of McGuffins, but it allows for a couple decent sight gags.

As in the structurally similar but vastly superior “Spy,” which was a prime showcase for the brilliant and fearless Melissa McCarthy, much of the fun of “The Spy Who Dumped Me” comes from watching these women figure out how to survive one dangerous situation after another and gain a little more confidence each time. Zany, fish-out-of-water antics give way to actual strategy and savvy. Audrey finds the swagger she’s always lacked, while Morgan learns to control hers. But the jams they squirm out of are graphic and intense in a way that consistently leaves a bad taste. Insane stabbings and shootings abound, as well as an inspired use of a fondue pot. An entire restaurant full of patrons gets obliterated in a hail of gunfire. An Olympic gymnast-turned-assassin (Ivanna Sakhno, whose looks are evocative of an evil Miley Cyrus) takes cold pleasure in beating and torturing our heroines.

“The Spy Who Dumped Me” leaps back and forth between such shocking violence and playful comedy but infrequently marries the two comfortably. A rare example in which it works features McKinnon’s character putting her trapeze skills to work in a Berlin circus performance, but that scene—like so many—goes on too long.

Conversely, the film boasts a terrific supporting cast of actors who don’t have nearly enough to do. We get a couple of tantalizing moments of McKinnon interacting over the phone with Jane Curtin and Paul Reiser as Morgan’s parents back in New Jersey; it’s a fun bit of casting that will leave you longing for more. The always-great Fred Melamed shows up in exactly one scene that feels frustratingly short. And McKinnon enjoys a flirtation with Gillian Anderson’s rigid MI6 boss that’s sparky but feels like an underdeveloped idea. As for Audrey, she teeters on the brink of an unlikely romance with a hunky British agent (Sam Heughan) who might be more trustworthy than her last spy boyfriend. Then again, he might not.

McKinnon can only do so much to carry the weight of all this plot and mayhem on her ever-capable shoulders. As thrillingly unpredictable as she can be as a comic presence, she’s almost hemmed in here in as a one-note character. We can rely on her to punctuate a moment with a well-timed eye bulge or to emphasize a particular word and infuse a whole line with off-kilter meaning. But when the figure she’s playing is superficial—as was also the case the past two summers in the “Ghostbusters” reboot and “Rough Night”—McKinnon’s one-of-a-kind approach begins to feel like shtick.

Maybe next summer, we’ll finally get the comedy that makes ideal use of McKinnon’s formidable talent. A sequel to “The Spy Who Dumped Me”—which the ending here suggests—probably won’t be it. 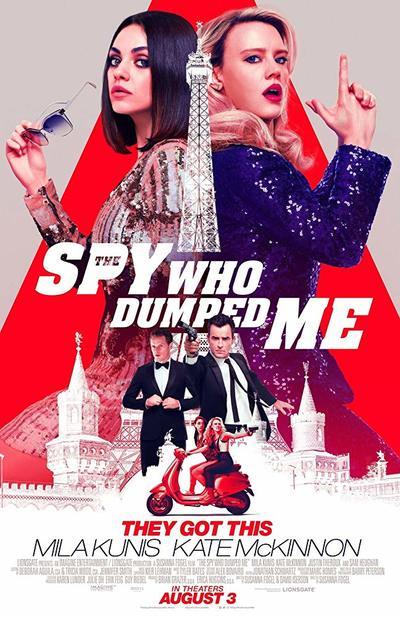 Rated R for violence, language throughout, some crude sexual material and graphic nudity.