The kitschy animated fantasy “The Spine of Night” often looks like an empty, overdetermined throwback to the formative juvenilia of Frank Frazetta’s sword-and-sorcery paintings and/or Ralph Bakshi’s stoner-friendly cartoons. In fact, you might recognize the style and mood of “The Spine of Night” if you’ve already seen “Fire and Ice,” the 1983 Bakshi/Frazetta joint that dished out even more hormonal loin-cloth fantasy stuff than most early Millennials knew what to do with.

The makers of “The Spine of Night” take both that earlier movie’s romantic/macabre vibe and its hyper-real rotoscoping animation style, and apply them to a series of cosmic, convoluted stories about the various seekers (and recipients) of a small blue flower that contains the universe’s secrets, among other things. These gloomy, disjointed tales of scantily clad warriors and physically grotesque tyrants speak once again to power’s corrupting influence and hope’s fleeting solace.

“The Spine of Night” can therefore be read as a contemporary balm for nostalgic movie misfits. In the movie’s press notes, co-writer/co-director Philip Gelatt notes that “the world feels increasingly like a nightmare,” then admiringly paraphrases an unidentified “someone,” who described “Conan the Barbarian” (1982) as “’Star Wars’ for crazy people.” (Co-writer/director Morgan Galen King also name-checks Bakshi and “Fire and Ice” as creative influences.) Unfortunately, not even scads of gore and full frontal nudity (both sexes!), nor a voice cast of fan favorites, like Lucy Lawless and Patton Oswalt, can inject “The Spine of Night” with enough crazy to jumpstart its tired counter-cultural posturing.

The first story introduces viewers to the magical blue flowers of Bastal, the enchanted swamp home of ferocious pinup queen Tzod (Lawless). Bastal doesn’t last very long in “The Spine of Night” since Tzod defies petulant despot Lord Pyrantin (Oswalt), who burns down Tzod’s swamp. She then seeks out more blue flowers, which can be used to tap into a mystical Force-like power, to restore some balance to a cyclically bent universe. Her efforts are contrasted and juxtaposed with the selfless and/or self-serving actions of other heroes and villains, like Mongrel (Joe Manganiello), an inevitably corrupted barbarian leader and necromancer, and Phae-Agura (Betty Gabriel), an unusually sensitive librarian-cum-warrior.

Beyond a wealth of exploitation-friendly elements, the other unifying quality among these stories is a (largely implied) parallel between the endangered Bastallian flowers and the well-guarded Pantheon, an Alexandrian-ish reserve of human knowledge that separates the haves from the understandably revolting have-nots. That is: if you or your tribe have access to the Pantheon, then you don’t need to worry about having not. In that way, this blood-soaked fantasy, chockablock as it is with flaming blue skulls and assorted genitalia, also occasionally makes time to lament systemic oppression and class inequality. Sounds great, I know, but that uneasy mix of progressive ideals and earthy charms doesn’t come together as often as it should.

The first and maybe biggest problem facing viewers when they watch “The Spine of Night” is its drab and dramatically inert animation style. Today, rotoscoping animation, which makes individual characters move with limited photo-realistic sensitivity, looks like a retro-futuristic relic. There’s also a disappointing lack of inflection to the characters’ facial and physical features, not to mention the movie’s unexciting and un-nuanced color palette. Worry and muscle lines accent rather than distinguish various body parts, so while these muscle-y fantasy characters physically move like real people, they generally look like animated Colorforms-style silhouettes.

The crudeness of that animation style may seem enchanting to some viewers, especially those who understandably still marvel at Bakshi’s pioneering style. But it’s hard to get swept away by “The Spine of Night” when, in an early establishing scene, Zhod enchants Bastal’s swamp water, which then drags Pyrantin into its flat, uninflected, mostly implied depths. Oswalt’s a fine enough voice actor, but his cries for help are only so moving when his character’s slowly absorbed by a lumpy grey mass that takes up much of the screen.

There’s also a variable quality to the cast members’ line deliveries. Admittedly, a lot of dialogue would probably be more enchanting if you could read it for yourself in an issue of Heavy Metal magazine. Unfortunately, not everybody in the movie’s voice cast knows what to do with deep purple prose. Two exceptions that prove the rule: Lawless and Richard E. Grant, the latter of whom plays a weary undead knight called “The Guardian,” who watches over the last Bastalian flowers and says stuff like “I ask you: who are we to destroy the mysteries of the night? We merely stand at the threshold between men and gods.”

Then again, if you pay close enough attention to what Grant and Lawless are declaiming, you might find “The Spine of Night” to be a diligent homage that lacks an essential sort of crazy ambition. “Fire and Ice” still feels like a proprietary claim by two pioneering artists who were, even in 1983, trying to re-claim their by-now inescapable brand/influence. By contrast, “The Spine of Night” feels like a heroic mash note to the formerly frowned-upon taboo of watching this sort of black light/van art epic, only it’s now a couple decades later, and not at all better. 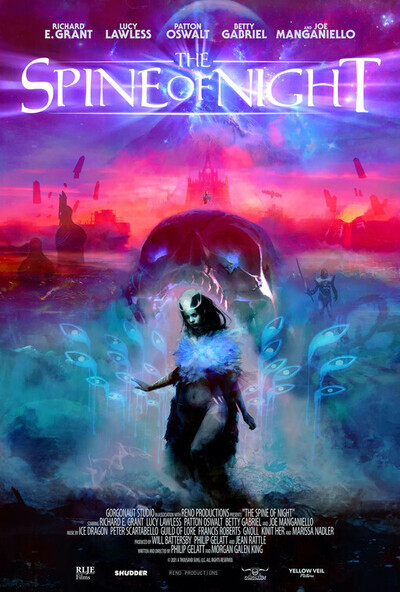 Richard E. Grant as The Guardian

Larry Fessenden as Prophet of Doom