From 2013 through 2015, the mainland Chinese and Hong Kong tabloid press latched onto a story about a double homicide. Henry Cheung and his friend Angus Tse were accused of murdering, dismembering, and then microwaving Cheung’s parents. The media frenzy surrounding Cheung and Tse was not without precedent, thanks partly to a spate of lurid ripped-from-the-headlines potboilers that were, in the early 1990s, a staple of pre-handover Hong Kong cinema.

“The Sparring Partner,” a pulpy and engrossing courtroom thriller based on Cheung and Tse’s case, feels like a throwback to those earlier Category III movies. It even shares the same Cat III rating that, in Hong Kong, comes with certain tropes and generic expectations, starting with explicit violence and softcore sex. (For more background information on Category III movies, check out my six-part Fangoria column, “A Guide to Hong Kong Category III Shockers”). Cheung and Tse are ideal subjects for a Category III thriller since those movies use established procedural tropes to pander to HongKongers’ barely suppressed traumas and neuroses.

In “The Sparring Partner,” the sadistic Henry (Yeung Wai-leun) is accused of conspiring to kill his parents with his slovenly friend Angus (Mak Pui-tung). Most of the movie represents their court trial through interviews conducted both in and outside of court. Henry’s guilt seems to be assured, given his unbothered body language and unrepentant testimony. His motives also seem clear: he might have done it for his parents’ real estate, because he was jealous of his older brother, or maybe because of his sociopathic admiration for Hitler. Henry’s delusional is what I’m saying, and everybody, including his trial’s nine jurors—two more than usual—already seem to know who he is.

Angus isn’t as easy to pathologize. The evidence against him is flimsy, and his mental and emotional intelligence is often questioned. However, many hints throughout “The Sparring Partner” suggest that the terms by which Angus and Henry were judged are ultimately inadequate. Because Angus was beaten and forced to submit a confession by the Hong Kong police. The jurors puzzle over him, but most seem convinced by his testimony’s anecdotal details. Angus often yells, and his speech is childish, but he has an answer for everything, like why did he try to patch the holes in his bathroom (vermin infestation) or why did he allow some forms of evidence to be used against him (police brutality). Henry insists that he didn’t make Angus do anything he didn’t want to. He might be right.

Ultimately, “The Sparring Partner” burrows deeper into the tics and trends of previous Hong Kong trial thrillers like “Remains of a Woman” and “The Final Judgement,” both of which dramatized the same real-life murder trial. In that case, a married couple was implicated in a drug-fueled homicide, which they then covered up by dismembering, dissolving, and storing their victim’s body in a metal container full of acid. “The Final Judgement” and “Remains of a Woman” are about women who cannot face the truth about their respective partners. “The Sparring Partner” is more about the culpability and partiality of a jury of Hong Kong residents, some of whom have read about this case in the tabloids, despite being told they should not.

Based on trial interviews, most jurors assume that they know who’s to blame. Later in the movie, the jury’s deliberation is interrupted by a dramatic re-enactment that seems to come out of nowhere. In the middle of their discussions, they see Henry attacking and killing his parents. The brutal violence of this inexplicable, magically realistic scene is disturbing, but it only ruffles the jurors’ feathers for a moment. They gasp and carp to each other. After that, it’s back to a low drone of annoyance and the comfortable presumption of Angus’s innocence.

“The Sparring Partner” points a slippery finger at its audience, their subjects’ lawyers, relatives, and inevitably the perpetrators themselves. Of course, we’ve already seen this story in the alarmist press and sensationalist movies. Still, does that familiarity breed an easy sort of contempt? Is Henry his brother’s keeper, or is that just a tempting story?

The makers of “The Sparring Partner” seem to be counting on viewers’ built-in fascination with their doomed protagonists. They don’t look down on viewers with chin-stroking contempt but rather from within the cracks and gaps they jam into this over-ripe story. This is still a misanthropic Category III movie, so judgment is predictably applied with scattergun precision. But you don’t need to be a trenchcoat-clad aficionado for that to matter. “The Sparring Partner” leaves a mark because it’s compelling as both a model example and a bitter auto-critique. 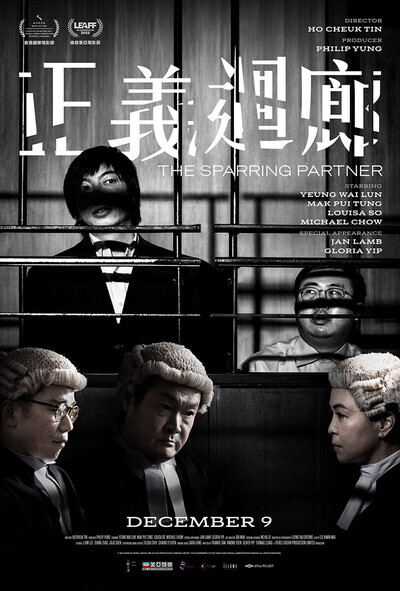