It’s funny that a company that feels like it’s taking over the entertainment world is so obsessed with the end of it. From “Bird Box” to “How It Ends” to “Cargo,” Netflix is no stranger to original films about the day society collapsed. Given the reportedly huge viewership for “Bird Box,” it’s no wonder they keep dipping their bucket in this subgenre well, but I can’t be the only one who feels like they keep coming up with less and less. Take their latest, “The Silence,” a dull retread of ideas explored more interestingly in other films and TV shows. Even the always-welcome Stanley Tucci can’t add any flair to a movie that feels so much like a relative of John Krasinski’s 2018 smash hit that one has to wonder if Netflix didn’t try to convince the producers to rename it “A Quiet Paradox.”

While it's not completely fair to compare any movie to another, the parallels between “The Silence” and “A Quiet Place” are too prominent to ignore. Not only is this adaptation of John Lebbons’ 2015 novel also about deadly creatures with enhanced hearing but it features a deaf girl and her father trying to survive. The former is played by Kiernan Shipka as Ally Andrews, a 16-year-old who lost her hearing at the age of 13. Unlike “A Quiet Place,” in which hearing loss played a significant role not just in narrative but framing, Ally’s deafness is barely explored nor a truly significant part of the storytelling. Again like Krasinski’s film, it allows the family to communicate more deftly in silence, but that’s about it.

The creatures of “The Silence” are the underground type, released from a cave in which they’ve been breeding and planning world dominance in the opening scene. Named “vesps,” they look vaguely like the offspring of a pterodactyl and Giger’s alien. They move quickly when they hear a sound, and it appears likely that the whole world will be destroyed by them in about a day or two.

This is the reality that faces Ally’s father (Tucci) and his family, including his wife (Miranda Otto) and best bud (John Corbett). Ignoring the advice of officials to stay put, they leave the city, reasoning that there’s less noise in isolation. The film’s best sequence follows a car crash on a rural road, a sacrifice, and the realization that the Andrews are trapped in their car. It’s reasonably well conceived and executed.

Sadly, once the Andrews get where they’re going, the pace of “The Silence” slacks to a depressing degree. Of course, one of them is hurt. Of course, they have to go get drugs. Of course, there are other survivors who may be more of a threat than the creatures. These kind of predictable tropes work better on the page where an author can breathe new life into them. Director John Leonetti (“Annabelle”) seems bored by his own material here, sadly directing Shipka to an inconsistent, uninteresting performance. There’s no suspense and no reason to care. The most interesting thing about “The Silence” may be its cruel streak, including a horrible scene in which a woman and her loud baby are kicked off a subway car. If Leonetti and company are trying to portray the dramatic stakes of the situation, “sacrificing a baby” may be the cheapest way to raise tension in the horror movie playbook.

Although “The Silence” is barely a horror movie, and that’s its biggest problem. A horror movie needs stakes, and you just never feel them here. Again, it really makes one appreciate the sound design and pacing of “A Quiet Place” to see a similar concept handled in such an ineffective way. It’s not a complete trainwreck mostly due to the occasional smart decision by Tucci and the aforementioned road sequence, but it’s certainly not a film that makes clear why Netflix seems increasingly obsessed with the end of the world. 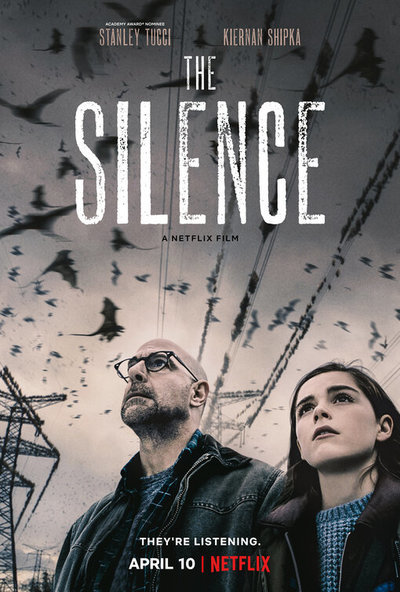