Just when you think the zombie genre has no new stories to tell, along comes the heartbreaking Aussie undead drama “Cargo,” anchored by another wonderfully committed performance from Martin Freeman. It’s an inconsistent work overall, but there’s enough to like here for fans of the genre (of which I am certainly one) and it’s refreshing to see someone work in a register the zombie movies haven’t really utilized lately. “Cargo” is closer tonally to the source material for “The Walking Dead,” a work more interested in the survivors than the brain-eaters. In that sense, it also reminded me of the template for most of these movies, Romero’s “Dead” movies, in that the concept of zombies are merely an entry point for deeper themes. Perhaps the highest compliment I can pay it is that I think George A. Romero himself would have liked it.

“Cargo” opens in a world already decimated by a “virus.” We meet Andy (Freeman), wife Kay (Susie Porter), and their baby Rosie as they’re slowly moving down an Australian river, discussing how long before they'll have to go ashore to get food. They see another family on the shore and Andy makes eye contact. The adult male in that group responds by lifting his shirt to reveal a gun. This is the world now. And the filmmakers have very cleverly set up the multiple enemies of “Cargo” in that they haven’t opened with a zombie attack but concern about rations on water and distrustful humans on land.

Without spoiling anything, things go from bad to worse for Andy and his family. The clever new addition to the zombie genre in “Cargo” is that those bitten by the undead don’t turn instantly like in so many other movies. Those who are bitten have 48 hours before they “turn.” And so people literally put on what looks like a FitBit with a timer that reads "48:00". This makes for a film that’s more about what you would do if you only had two days left to live than what actually kills you. How far would you go to make sure your loved ones were protected? “Cargo” becomes a metaphor for the world we’re leaving behind for our kids as much as a horror movie.

However, it’s something of a muddled metaphor. I kept waiting for “Cargo” to feel like it had something more confidently to say, but it gets lost in the mid-section when meets other survivors, especially one who has ulterior motives. The parallel is clear—one man is selfish, trying to get what he can “while the sun shines,” while Andy reminds him the sun is most definitely not shining—but it feels too easy. And the film is remarkably slack in terms of pace given that it's got a ticking clock literally on the arm of one of its characters. It’s fair to say that I really liked “Cargo” conceptually and thematically, but less in its execution. It’s just too slow and shallow once you figure out what it’s trying to say. Thankfully, there’s Martin Freeman to keep you grounded when your attention threatens to wander to your phone. He’s always been a remarkably committed actor, and he is excellent here yet again, conveying a complex blend of understandable fear with the courage that comes with parental obligation. He constantly rescues "Cargo" when it goes off track.

Most refreshingly, baby Rosie never feels like the cheap device I was so convinced she would be early on. There are many manipulative “baby in jeopardy” scenes, and she exists more as a reminder of the emotional weight on Andy’s shoulders. She is often literally on his back as he trudges through the outback toward an uncertain future. It’s when “Cargo” focuses on that metaphor—the parental obligation to carry our children to safety—that it works better than most recent original Netflix genre movies. It’s a bumpy journey through this "Outback of the Dead," but there are some interesting stops along the way. 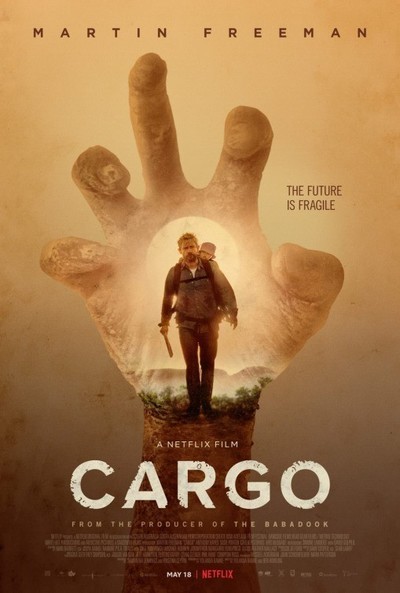