Frustration is a sensation that is felt at certain points by each of the three key characters in “The Shepherdess and the Seven Songs” and it is one that will also be experienced by most people watching it. Pushpendra Singh’s film is certainly not lacking for ambition—at various times, it veers between folklore, myth, feminism, and metaphorical commentary and the turbulent history of the province of Jammu and Kashmir where the story is set—and it has a number of individual moments and elements that are undeniably striking. The trouble is that while many of these bits and pieces are often fascinating, they never quite pull together into a truly compelling or satisfying narrative.

The film, which is based on a short story by Vijaydan Detha and also takes inspiration from the works of 14th century poetess Lalleshwari, begins when Tanvir (Sadakkit Bijran), a nomadic shepherd traveling through the Kashmir region, is smitten by beautiful local Laila (Navjot Randawa). He asks the elders for her hand in marriage after undergoing a ritual involving lifting several large rocks. Laila, it should be noted, is not exactly thrilled about marrying him but does not really have any say in the matter. The two are soon wed and Laila is forced to leave her own home for a settlement at the base of the Himalayan mountains where she begins her duties as Tanvir’s bride.

Because Tanvir and the other members of his tribe do not have the proper paperwork, they arouse the suspicions of the Indian police, who begin visiting their encampment quite frequently. One officer, Mushtaq (Shahnawaz Bhat), also falls hopelessly in love with Laila, though she wants nothing to do with him either, even going so far as to smack around a colleague of his who also makes his romantic intentions towards her known. Borne out of equal parts boredom and resentment about being the object of desire for two people she does not care for, Laila begins to torment Mushtaq by arranging for late-night rendezvouses and then figuring out ways to have the unsuspecting Tanvir accompany her to the meetings, forcing Mushtaq to create elaborate ruses to explain why he just happens to be hanging around Tanvir’s barn amid the sheep at midnight. As the bait-and-switches continue, it soon becomes apparent—though evidently not to Tanvir or Mushtaq—that Laila is using the unacknowledged power she has over the two as a way to hopefully gain her ultimate freedom from them.

This is all kind of interesting to a point but after a while, “The Shepherdess and the Seven Songs” begins to run out of steam. Singh is trying to do a lot here but the central story is not that strong and cannot quite bear the weight of the feminist and political allegory that has been loaded on top of it. A big part of the problem is that it never really manages to establish Laila as a compelling character in her own right. Yes, Randawa is beautiful and has a natural sense of screen charisma, but there is precious little about Laila that we see that explains why everyone is so driven to distraction by her. And since the film doesn’t really make the case for her as an individual trapped in circumstances not of her making, it is therefore hard for the audience to have much of a rooting interest in whether she is able to break free of those constraints or not. This is especially evident in the final moments that simply do not hit as hard as Singh clearly hoped because we have little emotional involvement in what is happening.

At the same time, while the film as a whole did not quite work for me, there are a number of things I did enjoy. The cinematography by Ranabir Das is appropriately spectacular; it imposes a sense of mystery and atmosphere to the proceedings and draws you in than the storytelling. The section in which Laila subverts her supposedly clandestine meetings with Mushtaq by bringing an unsuspecting Tanvir along is funny and inspired enough to allow you to overlook the fact that you are essentially watching the same joke being replayed numerous times. And while it doesn’t quite pay off in terms of its dramatic power, the final moments are indeed pretty spectacular, the kind of sequence that Werner Herzog would have been proud to pull off.

But while I suppose I am glad that I saw it on some fundamental level—in the sense that I am always happy to see films that offer me a glimpse into lands and cultures unfamiliar to me—I cannot quite bring myself to recommend "The Shepherdess and the Seven Songs." Here is a film that is too remote and reserved for its own good. 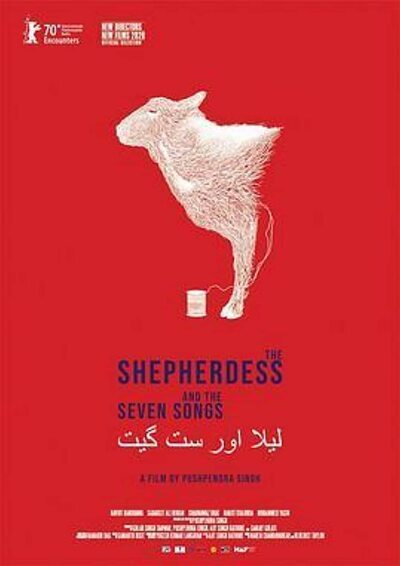 The Shepherdess and the Seven Songs (2022)