I have been wondering ever since I read it why someone doesn't make a movie out of Joseph Conrad's novel “Victory.” It tells the story of a proud, lonely man, the young woman who comes to share his hideaway on an island, the murderers who invade their solitude, and the way he must choose between philosophy and violence. I see John Malkovich as the man and Lili Taylor as the woman.

In a more perfect world, I could go on to describe the movie, its surprises and riches, its depths of character, its marriage of ideas and action. But in this world I am forced instead to review “The Secret Agent,” an overcast new film made from a different novel by Joseph Conrad (from, indeed, perhaps the least filmable novel he ever wrote).

The action takes place mostly in 1890s London--or in a small, rainy corner of London represented by a claustrophobic studio set. In a shabby street corner shop, a man named Verloc (Bob Hoskins) sells pornography to furtive men. “Would you like to have a look at . . .something more interesting?” he asks, insinuating himself, as all pornographers must, into the needs of his clients.

Pornography is not his real business. He is a member of an anarchist cell. Its members meet in Verloc's flat, planning the destruction of society. But anarchy is not his real business, either; he is a double agent, paid by the Russians to infiltrate exile groups. (These are the Czarist Russians, of course, although the Soviet version also hated anarchists.) Verloc lives with a ripe young woman (Patricia Arquette) who has married him for only one reason: To find a home for her little brother (Christian Bale), who is retarded. She pours tea uneasily for her husband's friends, and reduces all of the film's politics into an angry statement to her mother (“The police are there so that them as have nothing can't take nothing away from them as have a lot”).

Conrad wrote his novel soon after an actual attempt to blow up the Royal Observatory at Greenwich, and in “The Secret Agent” the Russian ambassador (Eddie Izzard) orders Verloc to blow up the observatory in order to discredit the anarchists. But the plot goes horribly wrong, revealing the whole shabby worthlessness of Verloc and all of his enterprises.

Conrad made “The Secret Agent” a character study, and although it is not one of his great novels, it is a good one. The movie deals more with externals, and since there are few of any interest, it drags and finally sighs and expires. The performances are as good as the material permits, and I liked jolly Jim Broadbent as the police inspector (the kind of man who studies dirty postcards very carefully before arresting them as is connected with 'em). Robin Williams is grim and effective as the Professor, who walks the city with bombs strapped to his body.

The film was directed by Christopher Hampton, also a playwright, whose film “Carrington” was one of last year's best. This project is dead in the water. Read the book. Better still, read “Victory.” 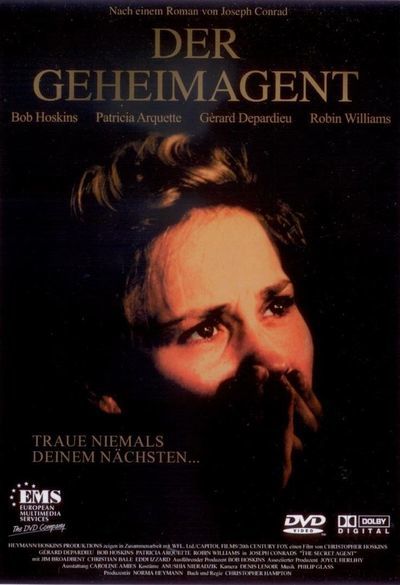