The Sea of Trees

You could almost hear the boos all the way from Cannes after the now-infamous premiere of Gus Van Sant’s “The Sea of Trees” over a year ago. Then again, Cannes viewers have a history of, shall we say, outspoken responses to films that garnered very different reactions when they finally made the journey across the pond (please leave the room if you’re one of the folks who booed “The Fountain”). Perhaps the unleashed vitriol against this high-profile film was unmerited. It had to be to a certain degree, right? The director of such great films as “Drugstore Cowboy” and “Milk,” working with Matthew McConaughey in the middle of his McConaughaissance and undeniably fantastic co-stars Naomi Watts and Ken Watanabe. On paper, it feels like a can’t-miss, especially when one considers how much it plays with themes that Van Sant has often-brilliantly explored before. Movies don’t exist on paper. And this one’s a mess.

“The Sea of Trees” uses depression, cancer and suicide as manipulative devices to tug at heartstrings instead of offering even the slightest insight into the human condition. In one of the films more lugubrious passages—and there are several—I started to consider how much “The Sea of Trees” incorporates themes and concepts of other, better Gus Van Sant films. He’s long had a fascination with the natural world, used effectively in films like “Gerry”; he’s certainly unafraid of what might be called slow pacing in works like “Last Days”; and he’s confronted depression repeatedly, in most award-winning fashion with “Good Will Hunting.” Maybe that’s why this script appealed to him in the first place, but it could also be why he can’t find a way to bring anything new to it. He’s been here before.

Arthur Brennan (McConaughey) buys a one-way ticket to Tokyo. He brings no luggage. He goes straight to Aokigahara, a forest at the base of Japan’s Mount Fuji that’s such a notorious location for suicide that this is actually the second film about it released this year (after the horror entry “The Forest” in January). He works his way into the forest, finds a ledge on which to sit, takes off his glasses, and slowly starts taking the prescription medicine he brought with him. That’s when he spots Takumi Nakamura (Watanabe), another suicidal man who now seems to be looking for a way out of the forest and back to safety, but he’s lost the path. Arthur wants to help Takumi, and the union seems to give both men purpose again. Even if they want to die, they also want to help each other. Being suicidal doesn’t change someone’s innate goodness. And there’s a good movie in Arthur and Takumi talking, walking, learning and rediscovering reasons to live.

Sadly, “The Sea of Trees” isn’t really interested in that movie. Instead, Van Sant and screenwriter Chris Sparling flashback to fill us in on why Arthur Brennan is here in the first place, making “The Sea of Trees” one of those horrible “suicide explainer” movies, in which someone’s depression is turned into a mystery to solve. Stick with the flashbacks long enough and you’ll know why. We meet Joan Brennan (Watts), Arthur’s miserable wife. She’s a functioning alcoholic, driven deeper into the bottle by the fact that her husband cheated on her. She’s also a horrendous caricature, imbued with as much realism as possible by Watts but purely a device in Sparling’s script. She’s the awful wife, who then become the sick wife when she gets a cancer diagnosis. “The Sea of Trees” is a movie about suicide, cancer and depression that’s not honestly interested in any of them. They are merely devices to get us to the third act revelations.

Don’t worry, I won’t spoil the third act of “The Sea of Trees,” other than to say that Nicholas Sparks would raise an eyebrow at the manipulative twisting and turning of Sparling’s script. The true tragedy is that McConaughey actually isn’t bad here. He has a monologue about an hour in, during which he fills in his forest companion on the history of his marriage, in which not only is McConaughey quite good but you realize how unnecessary the flashbacks were in the first place—hearing Arthur talk about his marriage is much more interesting than watching clichéd highlights from it. Although, in this scene and throughout the film, Van Sant and composer Mason Bates make tragic mistakes. This is one of the most overheated, awful scores of the year, sounding like something cut from mid-‘90s Miramax awards bait when this project would have been much better served by the natural sound of the wind through the trees.

Bates’ score is just one example of a mistake in a film that contains an easily identifiable misstep every few minutes. Whether it’s a clichéd line of dialogue, a lack of confidence in the core of the storytelling, a false impression of depression, or the horrendous twists of the final act, “The Sea of Trees” piles on the filmmaking errors in a way that makes the boos from Cannes somewhat surprising in that it’s hard to believe there were that many people still there to make a sound. 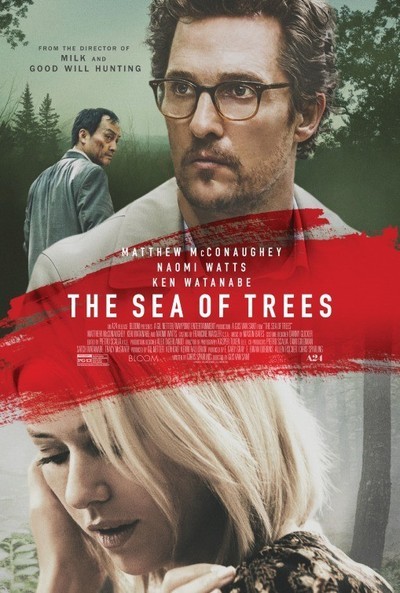