If the conspiracy suggested by Chad Gracia’s Sundance prize-winning documentary, “The Russian Woodpecker,” turns out to indeed be true, it will have uncovered one of the most shockingly insidious genocides in human history. Not only is the film’s subject, Fedor Alexandrovich, whole-heartedly convinced that the Chernobyl disaster was committed purposely by high-ranking Russian officials, he claims to have found the precise man responsible for ordering the destruction of the Ukraine-based nuclear plant. Considering that 985,000 lives have reportedly been claimed by this catastrophe, this isn’t the sort of theory to be taken lightly.

Alexandrovich himself was a resident of Chernobyl when he was forced to evacuate. It took 36 hours for local citizens to be notified of the radiation leak, and 18 days before Mikhail Gorbachev addressed the Soviet Union with the news. The belatedness of this response makes George W. Bush’s prolonged reading of “My Pet Goat” look flat-out sensible in contrast. Left with radioactive strontium in his bones and deteriorating eyesight, Alexandrovich is determined to prove that the tragic events that took place on the evening of April 26th, 1986, were no accident.

What’s curious about Gracia’s approach is its pronounced theatricality. Both he and Alexandrovich have a background in theatre, and it clearly shows in staged scenes where impassioned monologues are delivered to the camera and artful symbolism is displayed with no trace of subtlety. These sequences are effective in portraying Alexandrovich’s mounting obsession, yet they call into question the authenticity of the film’s supposedly unguarded moments as well. There’s a sense that the film may be, in fact, a colossal instance of performance art fueled by one man’s entirely defensible paranoia at the malevolent forces threatening to rebuild Putin's cherished Soviet Union and ignite World War III. This particular conspiracy may not be true, but it might as well be.

The most haunting passages in the film occur when Alexandrovich sifts through the wreckage of his own country irrevocably marked by the evil acts committed against its people by dictators like Stalin. There are echoes of Joshua Oppenheimer’s far more straightforward “The Look of Silence” in scenes where Alexandrovich exposes the crippling denial within various citizens who refuse to face the atrocities that unfolded in their own backyards. Horrifying images of ravaged corpses—the victims of a Stalin-enforced famine during the early ’30s—wouldn’t look out of place in a Holocaust museum. “We live in a criminal society,” says Fedor’s mother, and her words prove to have an alarming resonance. Now that the missile responsible for destroying the Boeing 777 while in flight over Ukraine last July, killing 298 passengers, has been confirmed as Russian-made, Alexandrovich’s ideas are poised to be embraced by a wide array of conspiracy theorists as this film continues to be discovered and debated.

It all began with the incessant tapping of an elusive Russian radar signal, nicknamed “the woodpecker” for its ten taps per second. Allegedly constructed by the Soviets as a Cold War weapon that would penetrate Western communications, the towering “Duga” radar antenna wreaked enough havoc to cause some Americans to speculate over whether it was designed for “mind control.” Alas, the Aurora Borealis turned out to serve as a celestial canopy blocking the signal from its intended target, thus rendering the Duga a seven billion-ruble folly. With an evaluation of the failed behemoth set for September of ’86, Alexandrovich argues that Vasily Shamshin, the Minister of Communications whose reputation was on the line, called the Chernobyl employees during their late shift, and ordered them to destroy the plant. Since it was located not far from the Duga, the plant’s meltdown would surely serve as a cover-up for the embarrassing venture. Shamshin also happened to be Vice President of the Soviet-Cuban Friendship Society, which according to Alexandrovich, essentially translates as, “War to America.”

The implications of this theory are scary as hell, yet the style Gracia chooses to utilize is overdone to a fault, thus undermining the potential believability of the material. We hear much talk about how Alexandrovich is a “genius,” yet we get little sense of his work, apart from some fleeting excerpts. In an uncharacteristically jovial moment, Alexandrovich recounts the segment in Tim Burton’s memoir that discusses the difficulty of shooting Danny DeVito’s nude scene in “Big Fish,” thanks to some pesky mosquitoes. Perhaps Alexandrovich took some pointers from Burton, since he frequently appears unclothed in his own artfully heightened footage shot in Chernobyl, at one point donning a plastic anti-radiation suit modeled after those worn by liquidators. The post-apocalyptic landscapes captured by the courageous lens of cinematographer Artem Ryzhykov are deeply chilling, especially when Alexandrovich stumbles upon a classroom littered with gas masks. Turns out they were as useless as the desks that American students were promised would shield them in the event of a nuclear blast.

In some ways, Alexandrovich resembles a hybrid of the typical Burton protagonist—the unkempt outsider in a society favoring conformity—and Louisiana district attorney Jim Garrison, as portrayed in Oliver Stone’s 1991 classic, “JFK.” That film was less interested in providing concrete answers than it was in illustrating just how much room there was for a reasonable doubt. On that level, “The Russian Woodpecker” soars. 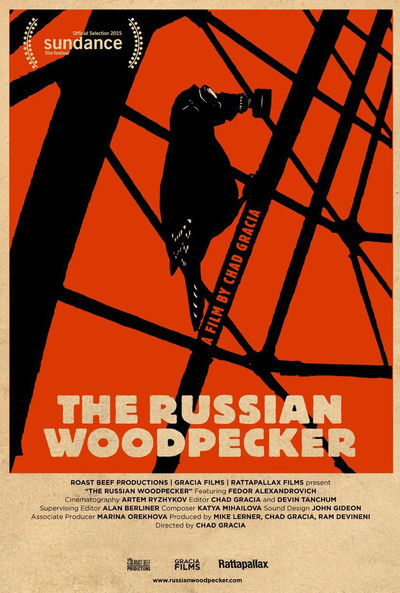