There's almost nothing to most "Tales from the Crypt"-style horror omnibus films. These portmanteau projects usually coast on the flimsy but deceptively adequate charms of their superior segments, since all the mediocre stories must do is compare nicely with the other segments. That's the beauty of the omnibus film's short story format: to be good enough, all you need is good hook, whether it's a premise, memorable line, or some decent special effects. I am a sucker for this type of low-stakes entertainment, so it comes as no surprise that I enjoyed "Southbound," a clever, though characteristically inconsistent, collection of five narratively-related short films about seedy characters who discover they're trapped in Hell. "Southbound" has one killer segment, and then four that are totally OK. That's an average ratio for these types of movies, as so many of their creators take the abbreviated length of their respective shorts as an excuse to slack off (as with the headache that is "The ABCs of Death"). Still, "Southbound" is a prime example of a horror omnibus film: even the weaker segments have something to recommend them.

Since "Southbound" succumbs to many of the usual pitfalls and pleasures of the horror omnibus format, it's not surprising that the film's weakest segments are its first and last entries. The introductory short is OK since it only has  to set up the film's over-arching premise. Two men drive down an open stretch of deserted country road, trying to frantically escape floating wraiths that we can only see in the distance. A cornpone evangelical DJ (who else but indie horror filmmaker/icon Larry Fessenden) warns listeners that they won't leave the brimstone-paved road that they're on without a fight. And each time the pair tries to move past a nondescript gas station, they wind up back where they started, while their tormentors keep catching up. This opening salvo has a cute premise and fun low-budget special effects, a specialty of directing collective Radio Silence ("Devil's Due" and the last segment in "V/H/S"). Radio Silence also directs the last segment, which similarly has some good visceral jolts—masked robbers attack a nuclear family at a road-side motel!—and wraps the film's over-arching narrative up a little too neatly (those hybrid cactus/death's-head wraiths from the first segment!). There's not much in either of Radio Silence's contributions, but there doesn't really need to be. These are only the moments when the film takes off and touches back down to Earth.

The film's second entry—its first real story—is well-directed but conceptually obvious. Three girls driving around in a lime-green Volkswagen bus get a flat tire, and wind up hitching up with a creepy Ray Bradbury/Norman Rockwell-style family of "old-fashioned," clean-living Satanists. You know that this family worships Lucifer based on their cartoonishly menacing behavior, like the way they worship their "Master" when they say before-dinner Grace. Written and directed by newcomer Roxanne Benjamin, this entry winks at viewers throughout and never goes anywhere you don't expect it to, thanks in no small part to constant references to a missing fourth girl that one of the Mystery Van's owners may or may not have killed. But this is just the first leg of the film's trip, a kind of warm-up act. Skin-deep ambience and appreciably morbid humor—like a weirdly addictive, albeit disgusting-looking "roast" that's served to the girls—is enough when the segment doesn't demand much more from audiences.

Benjamin's segment does thematically set-up the film's best short, which is helmed and written by David Bruckner (one of the co-creators of clever anti-technology omnibus film "The Signal"). This short, about a Good Samaritan who attempts to save a badly-injured pedestrian he hit with his car while talking to his wife on his phone, is the only one disturbing enough to be memorable outside of the film's omnibus context. He scrambles around a ghost town while listening to a sweet-sounding EMT dispatcher, a concerned 911 operator, and a demanding surgeon as they walk him through the steps of saving the severely injured victim. Blood spurts, limbs crack, and incisions are made in pointedly grisly ways; the victim is treated like a human-shaped nesting doll whose every layer is packed with gore and viscera. But again, while you know where Bruckner's segment is going, he gets you there with unholy conviction and ghoulish panache. If you see "Southbound," you should see it for this singular middle segment. The other four stories are all fine enough, and will give you a pleasant, albeit short, trip to a foregone destination. 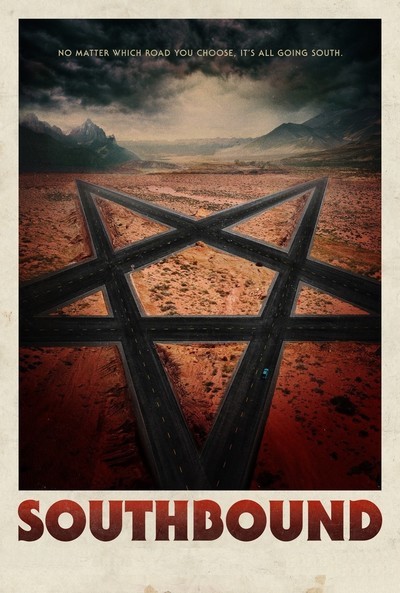 Director ("The Way Out")