Blake Lively gives it her all in “The Rhythm Section,” but the movie only meets her halfway.

The glamorous star gets grungy for the role of Stephanie Patrick, an ordinary young woman who transforms herself into an international assassin to avenge the killing of her family. Lively previously has shown a yearning not only for this kind of darker material, as in her standout supporting role in Ben Affleck’s “The Town,” but also for the physical demands of an action film, as she did so convincingly while fighting off a great white shark in the minimalist thriller “The Shallows.”

She’s deeply committed and down for everything “The Rhythm Section” throws her way, often quite literally. But despite some impressively inventive camerawork from cinematographer-turned-director Reed Morano (“The Handmaid’s Tale,” “I Think We’re Alone Now”) and a couple of intense action sequences, the film as a whole feels rushed and frustratingly empty. Although writer Mark Burnell adapted the screenplay from his 1999 novel of the same name, the story seems truncated; it’s as if he understandably wanted to include as much as possible from his source material, yet still had to work within the constraints of a reasonable running time. Giant leaps take place in terms of time and emotion, leaving us behind in confusion and rendering the human connections hollow and baffling.

Lively’s British accent is a bit spotty but she makes a strong impression from the start, when her character is at her lowest. It’s been three years since Stephanie’s father, mother, sister and brother died in a plane crash—a flight she was meant to take, as well. Now, she numbs the unimaginable pain with drugs and feeds her habit by working as a prostitute at a London brothel. Morano intercuts increasingly tight close-ups of Stephanie’s face—her shaggy hair, tear-stained cheeks and swollen eyes—with snippets of brightly lit flashbacks to happier times with her family, underscoring the shocking nature of her decay. When an investigative journalist (Raza Jeffrey) tracks her down and tells her the crash was no accident but rather an act of terrorism, it lights a fire under Stephanie to take back her life by taking out the killer.

“The Rhythm Section” comes from James Bond producers Michael G. Wilson and Barbara Broccoli, and it features the kind of globetrotting, espionage and tangles with an international array of bad guys you’d expect from a 007 movie. Stephanie travels from London to Northern Scotland, Madrid, New York, Tangiers and Marseille in her pursuit of justice with a variety of wigs and identities at her disposal. But the film is trying to do something different in making Stephanie’s stumbles a central part of her character. She’s not slick, she’s frequently in over her head and her missions don’t always go as planned. In fact, they never do. Lively’s vulnerability is as compelling as her raw combat skills, and Morano’s female gaze is clear-eyed rather than ogling.

But somewhere along the way, Stephanie becomes too enigmatic, despite the fact that she’s on screen nearly the entire time. We know very little about who she was before the tragedy, which was by design, but even a smidgen more backstory would have made the dangerous path she forges somewhat more plausible. When the exiled MI6 agent who’d been the journalist’s informant takes her in and trains her, it makes sense, although Jude Law is solid as the gruff character known only as B. Eventually, there’s a passing reference in the script to the fact that she’s spent months with this guy at his remote hideout at the edge of a Scottish loch, yet there’s little indication that they’ve formed the kind of emotional connection that would result from that kind of intense, intimate time together.

And yet a pivotal fight training scene in B’s cramped kitchen—shot in a single take—is riveting because it’s so flailing and imperfect, and because there’s nowhere to hide. Lively’s demeanor has morphed from that of a wounded animal to a scrappy predator. Later, Morano’s claustrophobic depiction of a car chase through the narrow streets of Tangiers, with cinematographer Sean Bobbitt (“12 Years a Slave”) inside the vehicle, also provides a visceral jolt.

Stephanie also meets up in Madrid with Sterling K. Brown’s character, a former CIA officer who now sells the intel he gleans to the highest bidder. He’s a crucial figure in her quest, but their relationship develops in ways that are both entirely unbelievable and narratively predictable. As charismatic as Lively and Brown are individually, they aren’t afforded the opportunity to establish any real chemistry with each other. And an interlude with an arrogant and wealthy bad guy (Max Casella) who also played a key role in the airplane attack raises way more questions than it answers.

That scene is a prime example of the film’s clangy tendency toward on-the-nose needle drops to comment on the action and set the mood. As Stephanie struts down Central Park West in a disguise, stalking her prey, we hear the ironic strains of the Brenda Lee classic “I’m Sorry”; later, as Stephanie closes in on her ultimate target, Elvis Presley’s “It’s Now or Never” plays. The title itself refers to a technique B teaches Stephanie to help her calm down and regain control during moments of panic: “Your heart is the drums, your breathing is the bass,” he says. “The Rhythm Section” itself could have used a little bit of soul. 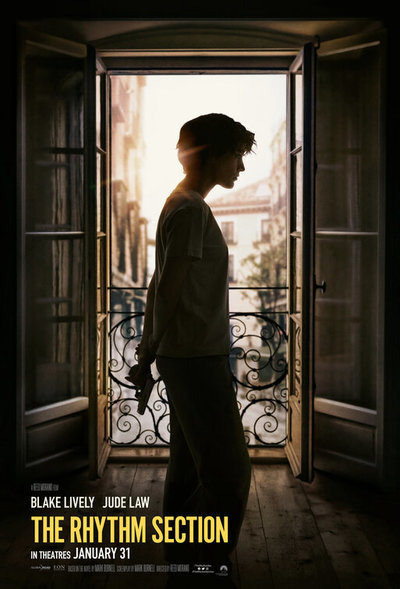 Rated R for violence, sexual content, language throughout, and some drug use.

Jude Law as B