“It’s not a comeback. It’s a relaunch,” Tanya Tucker insists. Country star Brandi Carlile idolized Tucker from the time she was a young girl. She loved Tucker’s toughness, her husky voice, and her musicianship. She believed that while men like Johnny Cash and Merle Haggard were admired as outlaws for their bad behavior, Tucker was seen differently because she was a woman. And she decided to do for Tucker what Rick Rubin did for Cash, to rejuvenate her career with what would become Tucker’s first album of new material in 17 years.

Tucker, who got her first number-one hit at age 13 and her first Grammy nomination and Rolling Stone cover at 15, was known as the wild child of country music. Between turning out hits and performing them on stage, she had a volatile life of sex, drugs, and sometimes rock and roll, with substance abuse and many romances, including an engagement to Glen Campbell, twice her age. As this documentary begins, she is in her dressing room, hair dyed a fluorescent pink, asking for prayers. And then, as she walks on stage, we see a kaleidoscope of archival clips of that same moment over the years. “Ladies and gentlemen, Tanya Tucker!”

Right from the start and through all of the upheavals (self-inflicted) of her life, she makes it clear that she is arriving at the one place that is her true home. Even before her teens, she was supremely confident and assured as a performer, her musicianship and dazzle completely natural and at her essence. Off-stage was another matter. For a long time, she was performing in real life as well, playing the part of the “life of the party.” Tellingly, when Campbell was asked what he loved about her, all he could come up with was the way she loved him.

Carlile, the producer and in every way the heart of this film as well as its hero, is something of a Tucker whisperer. The most affecting parts of the film show her gently encouraging Tucker as they begin to record the new album. When there’s a problem at the beginning of the first take, Tucker begins to unravel, thinking she is not up to it, that she has lost her musical instinct, and that she has let them down. Carlile reassures her that the problem was on their end and that Tucker’s voice is exactly right. Maybe that’s accurate. Or maybe it is just reassurance. But it works. Tucker shyly shares some new lyrics she’s written:

Bring my flowers now, while I'm livin'
I won't need your love when I'm gone
Don't spend time, tears, or money on my old breathless body
If your heart is in them flowers, bring 'em on

Carlile, deeply moved, promises they will finish the song that day. At age 13 Tucker turned down a song called “The Happiest Girl in the Whole USA” and recorded what would become her signature, a song about an abandoned woman at the end of her life, going to “that mansion in the sky.” She has been singing it for 40 years. But it is only now, with the encouragement of Carlile that her feelings have value, that she can express her own experience of looking back with regret and acceptance.

All the miles cast a long shadow
I'd take a couple back if I could I'd've learned to play guitar
Told my daddy more I loved him
But I believe, for the most part, I done good

The documentary’s skillful use of archival footage connects us to Tucker’s extraordinary talent as a singer and her vibrance and magnetism as a performer, adding poignant context to the present-day scenes, showing her often faltering, trying to hide her vulnerability. And always unfiltered. It is impossible not to smile as Carlile ponders the uselessness of trying to get “media training” for Tucker, who admits that she “dreads having to be disciplined about anything.” “She can’t control what she says and we all have to deal with it,” the very disciplined Carlile sighs. “Maybe I was put into this project to force me out of this rigidity I have about what people are going to do and say.”

Tucker’s “re-launch” is immensely gratifying, and the music is moving. But it is the human connection between Carlile and the woman who inspired her to be true to herself that should inspire us to be more patient and encouraging to those who need a little help to give all they can. 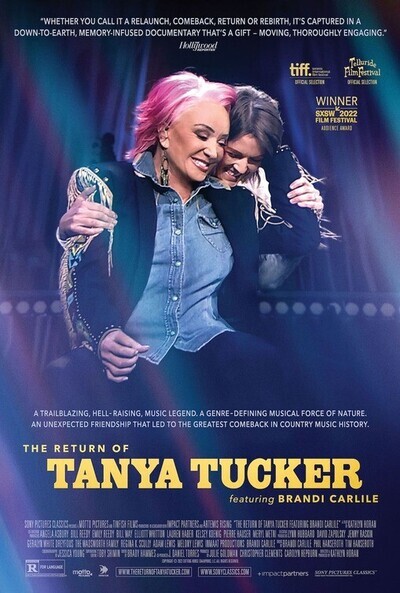