The massive structure at the center of "The Pyramid" is a three-sided pyramid uncovered in the desert outside Cairo after spending untold millennia hidden deep beneath the sands. Technically speaking, this means that the structure in question is actually a tetrahedron and not a pyramid but let us get down to brass tacks—there are very few people out there who would willingly pony up good money to see a film entitled "The Tetrahedron," especially a dippy run through the usual horror clichés that plays like a cross between "The Blair Witch Project" and the Steve Martin ditty "King Tut," only lacking the cinematic grace of the former and the raw terror of the latter.

But back to the pyramid, which it shall be continued to be referred because it is slightly easier to spell than "tetrahedron." It has been uncovered by a group led by archaeologist Miles Holiday (Denis O'Hare) and his daughter Nora (Ashley Hinshaw), a duo who are always squabbling because her approach to the job includes such new-fangled ideas as satellite technology, theories about the connection between the pyramids and alien civilizations (no doubt culled from repeated viewings of "The Being from Another Planet") and a dig wardrobe that Lara Croft might find skimpy, while he is an old fuddy-duddy who is more concerned with dusting artifacts with little brushes and stuff. Nevertheless, they both agree to bring a documentary crew, consisting of ambitious reporter Sunni (Christa Nicola) and weasly cameraman Fitzie (James Buckley), to film their findings. In other words, this is a found-footage movie, the notion of which should inspire more chills by itself than anything in the film proper.

Despite political upheaval in Cairo that requires them to pull out of the area and a cloud of toxic air released once the pyramid is penetrated, the four, along with fifth-wheel techie Michael (Amir K), are forced to enter the structure and it is only a matter of minutes before they find themselves completely lost and disoriented. As they stumble around in the dark trying to find a way out, they find themselves encountering the usual perils one normally encounters after penetrating a pyramid: collapsing floors, crashing rocks, hieroglyphics foretelling doom at every turn and yes, even an army of marauding mutated feral cats with a taste for anything's flesh. As the five continue on, their numbers inevitably begin to dwindle in various messy ways and it becomes apparent that there is something else in there with them that makes those feral cats seem about as threatening as Heathcliff by comparison.

In news that will probably not startle too many of you, "The Pyramid" is pretty much junk from start to finish. For starters, it is pretty much the exact same thing as the recent "As Above/So Below," lacking only the Parisian setting and the irritating typography, and while that may not mean much to the vast majority of you, the horror junkies who are the ones most likely to check this one out are likely to be really annoyed by this. The screenplay by Nick Simon and Daniel Meersand is little more than a collection of dramatic contrivances, characters so thin and irritating that one longs for their demises more than their survival and some very risible dialogue ("You aren't going to need the hatchet, but just in case. . .") Gregory Levasseur, who in the past has worked with Alexandre Aja on such supremely loathsome genre entries as "High Tension" and "Mirrors," makes his directorial debut here and demonstrate no particular feel for the job—there is no real tension to be had, the closest thing to actual scares are the most rudimentary "BOO!" moments imaginable (though there is one that does kind of work despite its obviousness) and the whole thing is shot so darkly, perhaps inevitable considering the setting, that there are long stretches where it is difficult to discern what is going on.

And yet, despite the general crumminess of the whole enterprise, I cannot help but feel a tiny bit of affection for "The Pyramid" and its cheesebucket B-movie trappings, even though I wouldn't dream of going so far as to actually suggest that you spend your hard-earned money on it. Thanks to the end-of-year awards derby, I have sat through a lot of movies in the last couple of weeks—films featuring people triumphing over all means of physical/emotional adversity, charismatic figures leading their people on marches to freedom and armies of people laying waste to mountain fortresses and the Stephen Sondheim songbook. Some of these have been good and some have been bad, but after a couple of weeks of cinematic heavy lifting on that scale, sometimes a swarm of mutated feral cats can hit the right spot, if only momentarily. 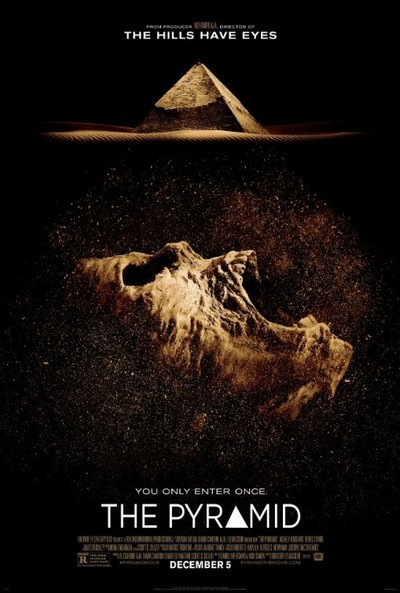 Rated R for some horror violence and bloody images