What does it mean when a singer goes silent? And a power woman loses her energy? And what if that woman is Kathleen Hanna? "The Punk Singer," a documentary about Hanna by Sini Anderson, explains using vintage performance footage, interviews with Hanna's fellow musicians, and chats with Hanna herself. Never one to mince words, Hanna's own surprising answer, the reveal of the film, is that Hanna has had something as dreary as Lyme Disease.

Hanna, the avatar of the Riot Grrrl movement of the mid-nineties, lead singer of Bikini Kill, stylist-inspiration for the trio Le Tigre which danced in-your-face, didn't seem the type to quietly shut down, yet she was suddenly not around much starting in 2005. It might not have been news to everyone, but for very young girls, and political lefties of the '90s and aught years, Hanna had been a big deal and cheerleader for girl empowerment, so her disappearance puzzled. Fans and friends thought maybe she was just tired, had nothing new to say or had told it all in lyrics which alluded to some childhood molestation (hers), discussions of "Girl" issues like eating disorders. In performances turning the tables on macho grunge, she had forced guys to the back so there could be a "girls only" space in concerts, ruled out inappropriate behavior in mosh pits, and told fellows to shut up if they were offensive or misbehaving. Or else she would stop performing. "I am your worst nightmare come to life/I'm the girl you can't shut up/There's not a guy big enough to handle this mouth" she spat out in her own version of lyrics/poetry slam.

But Hanna is rarely predictable, or even "to code." She had once supported herself as a stripper, and her unapologetic spin was that it was her body and she could do what she wanted with it. (Control is a constant theme with Hanna. And for any controller, when your body goes out on you, as hers recently did, it's an emotional wipe-out.) Surely it took bravado to go public with the stripping admission, making her fair game for a cliched feminist attack. Yes, someone might have dug it up, but she didn't have to acknowledge it had been her choice.

Worse yet, some in the press construed Hanna's over-all angry message as that of a self-victimizing victim. Yet if anything, her program is "How to be a hero of your own life," as writers from Jane Austen to Doris Lessing to Nora Ephron have also shown us.

And whether you thought her music was a banshee's howl or something more elevated, her look stuck, a combo of "up yours punk" with "girlie" attire, sometimes just a bra or nothing on top. Or perhaps a nicked-off T-shirt with "SLUT" ironically scrawled on her exposed tummy.

Now wearing cozy cardigans, the one-time resident of Olympia, Washington lets us into her very comfortable-looking house just north of New York City. She is getting over her lull, plans to launch her new music enterprise, "Julie Ruin," and even talks about her marriage to Adam Horovitz of the Beastie Boys. No, this is not a segment of "The View" but one more example of Hanna exhibiting her sometimes brutal honesty, tougher on herself than anyone else. (She once asked, for instance, "What does it mean that I am a feminist artist and I'm dating this person [Horovitz author of a song about getting women to do his laundry for him] and I'm so in love with him?") Horovitz, clearly in love with his now-wife, is hilarious throughout the doc, appearing at odd intervals like a sprite with deadpan comments. It almost seems that she has transferred some of her upending energy.

This calmer, occasionally melancholy Hanna may surprise those who have parsed lyrics such as "I'm the little girl at the picnic/Who won't stop pulling her dress up/It doesn't matter who's in control now/cuz this is new radio." (Bikini Kill's 1993 hit "New Radio") But director Anderson gives us context, even multi-generational perspective. Jennifer Baumgardner of the Feminist Press, and Tavi Gevinson, the high schooler/editor of Rookie magazine, ring in on "what Hanna means to me." Bits with Joan Jett and Kim Gordon keep things lively.

My takeaway is that Hanna tells it like it is, and suggests all women to do the same by paying attention to what your own reality really is. Now today that might not seem like a big thing. Yet Hanna, like many on the edge or forefront, has been a bit of a sacrificial figure, taking heat because she didn't fit neatly into any category, and therefore was even more threatening.

Even now "The Punk Singer" has triggered some criticisms that the movie is a puff job, giving an overly positive picture of Hanna. Fingers point to the fact that the movie's producer, Tamra Davis, is married to a member of the Beastie Boys band, whose multi-millions must have helped produce the doc. To which you've got to say, "Tosh." Even if true—and who knows?—how long have we complained about not being able to have an Old Girls Network like the power structure which gets movies made in and out of Hollywood?

As to the other point: Is the movie too adulatory? It is not the most subtly layered documentary I've ever seen, but these days it's no longer verboten to take a stance in docs. And there is so much to be admired about Hanna. Plus…if you've never seen some of those songs performed…it's electrifying.

This is what the fuss was all about. 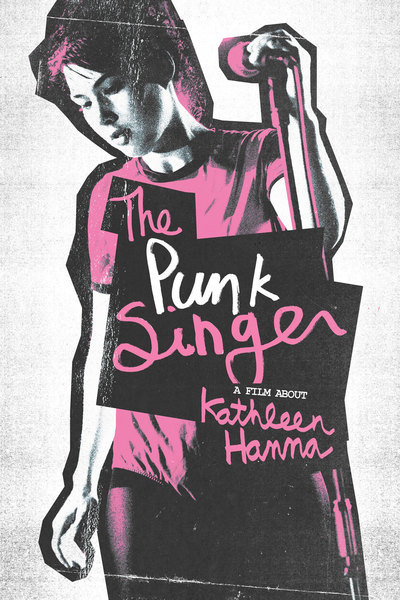 Kathleen Hanna as Herself

Adam Horovitz as Himself

Joan Jett as Herself

Jennifer Baumgardner as Herself

Johanna Fateman as Herself