The Professor and the Madman

“The Professor and the Madman” is the latest fiasco in bad movie history—what was once a dream project for Mel Gibson (who acquired the rights way back in 1998), and meant to be the directorial debut for his “Apocalypto” co-writer Farhad Safinia, has now become a black eye for the two. Taking the genuinely bizarre true story of the first Oxford dictionary editor and his friendship with an asylum patient who submitted 10,000 definition entries, the production fell apart (according to Deadline) because the financiers would not allow Safinia to shoot in Oxford, England, instead forcing them to use the apparently galling location of Trinity College in Dublin. When you watch the film (it’s barely in theaters but on VOD, despite its silent release) it’s not the locations that are the problem, if one can even tell the difference. Instead it’s the presence of Gibson and his co-star Sean Penn, who give the project a stuffy sanctimoniousness, as it so transparently yearns to be the definition of “powerhouse acting.”

You can see why these two actors were attracted to the project, as it gives them the roles they’ve been clawing for in other projects. Gibson, who used to direct vulgar epics in ancient languages, gets to play a misunderstood genius; Penn, who often believes the best acting is often the noisiest, is given carte blanche to holler and suffer. But while “The Professor and the Madman” might seem tailor-made for the two, it struggles to offer its own intellectual thrills as its story becomes about propping up the men, not so much the words.

With the film now credited to director and co-writer P.B. Shemran, this is not even a fun fiasco, mixing some kinetic handheld camerawork and a handsome mid-2000s Oscar-ready period piece sheen with a plot direction that dulls its initial ambitions. Gibson plays Professor James Murray, a self-taught man in numerous languages who joins the long-stewing Oxford English Dictionary project to become its unlikely editor. Defying the smug men around him who look down on his autodidact upbringing (and receiving some support from a peer played by Steve Coogan), Prof. Murray immerses himself in the project with the help of a few assistants, his work space surrounded by slips of paper related to the definition of a word. In one case, the word “art” proves to be their biggest treasure hunt, with everyone trying to track its meaning through different centuries and languages. In one of the movie’s few standout qualities, it does make the idea of a word seem alive—that a word can change throughout the years, and that slang is not an abomination but an evolution. But the workload is too much, and Murray hatches the idea of asking people to submit words with definitions.

Enter Sean Penn as Madman, who we see in the beginning of the film kill a man in front of the now-widow, but is sentenced to an insane asylum because he killed the wrong man. Penn’s Dr. William Minor has a complicated history, an American who fought in the Civil War and is disturbed in particular by a deserter he had to brand (the man he thought he killed in the beginning). Dr. Minor also has the privilege of intellect, helping save an asylum guard’s life during a ghastly injury, and subsequently earning the right to have papers, books, easels and more in his cell. Meanwhile, Dr. Minor is tormented by the growing guilt of killing that husband and father, even when the widow (Natalie Dormer) inches closer and closer to forgiveness. Annoyingly, her pain is treated as what essentially drives him the most crazy, even though she’s the one with the dead husband and father to her hungry children.

Prof. Murray and Dr. Minor finally meet at the hour-mark of the film, staring into each other's giddy eyes and exchanging book nerd gallantries on a bench. Dr. Minor is a godsend for Professor Murray’s project, and Professor Murray has given Dr. Minor a type of stability. “The Professor and the Madman” then gets worse when it works toward its true intent, which is to vindicate these men, losing sight of its initial hunt for knowledge in the process. It’s less about the Dictionary or its importance than it is positing Professor Murray and Dr. Minor as underdogs—one fighting for his editing gig, the other in grave need of protection from progressively harmful rehabilitation techniques—and the story tries to sell us on cheap pity for the men's potential.

At the center of “The Professor and the Madman” is a hollow cinematic spectacle—intellect. It’s nothing like seeing an actor actually play jazz piano, or beholding Jackie Chan as he turns downtown Los Angeles into a jungle gym. Instead, words become a type of gobbledygook in this story, as two acting titans can flap their gums all they want about fancy words and their histories, but simply sounding smart is cheap in film. Perhaps related, the dialogue is bad: “I have gone to the ends of the world on the wings of words,” Penn’s Dr. Minor remarks with a straight face and impressively scraggly beard, bungling the movie’s chance to make reading sound as transportive as it truly is.

Those who still follow Gibson closely might be amused by his considerably gentler side, or his Scottish accent that tends too waver as he presents a man who is constantly beat (he's better as a gruff question mark in the recent "Dragged Across Concrete," if you were wondering). But for Penn fans, whoever you are, this is a must, as he performs in the usual register of turning up the intensity to be taken seriously. It is stubbornly, frustratingly, the opposite of an actor able to share screen-time with their character (which he has the ability to do, like recently in Hulu’s series “The First”). There goes Penn, again, screaming and trembling and pulsing the veins out of his neck, and when there’s a sequence in which Dr. Minor is haunted by two ghosts in his cell, one can imagine the actor’s elation.

There is a fascinating true story in here, of an unlikely collaboration, and an important book. And yet “The Professor and the Madman” suffers not just from dull self-seriousness but its general direction, especially as its third act feels to be stapled together by wordy, compassionate speeches that are supposed to be grandiose, but mean very little. We’ll never know where Shemran’s movie truly lost its way, but its current form of saving face by sounding smart will make viewers want to simply move on from it, just like its star and director and have. 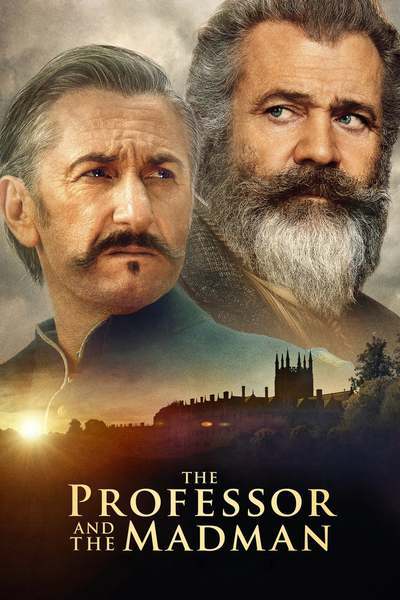