The cops-and-robbers genre is typically one that feels more accelerated than others, complete with quick cuts, witty dialogue, and narrative time jumps. S. Craig Zahler’s “Dragged Across Concrete” asks does it have to be? Extremely purposefully decelerated, even more so than his very deliberate “Bone Tomahawk” and “Brawl in Cell Block 99,” this brutal, ultra-violent film feels like an extension of Zahler’s work as a novelist, where he can work at a different pace than most filmmakers are forced to do. He takes 158 minutes to cover narrative ground that someone as kinetic as Edgar Wright would do in about 25. And the result is a film that often feels like Zahler’s most assured to date. Self-indulgent? Oh yeah. A provocation? You bet. But it’s difficult to ignore the craftsmanship and performances in “Dragged Across Concrete” simply because you don’t like some of its darker themes or feel like it’s too long.

Casting Mel Gibson as a kinda racist cop who longs for the days before political correctness is clearly a provocation in and of itself. And yet Zahler and Gibson don’t lean into that aspect as much as you may expect. Gibson does his best film work in years as Brett Ridgeman, a cop on the cusp of his 60th birthday and perpetually scowling. In their opening scene, Ridgeman gets a little rough and a little racist as he and his partner Anthony Lurasetti (Vince Vaughn) are working a drug bust. Their bad behavior is filmed by a neighbor, which leads to a suspension and an incendiary scene in which Gibson, Vaughn, and their chief (played by Don Johnson) discuss the PC state of the world. Does Zahler agree that political correctness is hampering police work? Is he presenting or endorsing? He’s tantalizingly vague even as Lurasetti proclaims he’s not racist because he orders dark roast on MLK Day.

Zahler’s provocations continue in a scene that follows in which Ridgeman’s wife (Laurie Holden) talks about how she was once a liberal but the crime in their heavily black neighborhood has made her racist. Zahler is working a classical road here narratively—a man who feels cheated by life and goes to extremes to correct the bad hand he’s been dealt—but he’s lined that road with hot topic land mines. Ridgeman believes that he’s at a point where stopping the drug trade doesn’t matter as much as doing it in a PC way, so he’s going to stop playing by the rules. He then gets a tip about a money exchange that he can rob, which means retirement and moving his wife and daughter to a safer neighborhood.

Meanwhile, Zahler introduces us to another iconic character from the potboiler genre—the ex-con jumping from being behind bars to the criminal assignment. Henry Johns (Tory Kittles) comes home to find his addicted mother has been working as a prostitute to make ends meet, and he too is going to change his predicament. So Zahler presents us with a black young man and a white old man who are both going to commit crimes to change their luck. Is he asking us to compare the two? Obviously, at least a little. And yet “Dragged” never feels like a “We’re all the same” moral message movie. It’s a character piece—take whatever themes from it you choose, but don’t expect them to be highlighted or underlined.

We also have to talk about the way Zahler uses women in his films, this one in particular. They are all victims who need to be protected by the men in their lives or worse—brutally abused and murdered. Early in the film, Anthony suggests the world changed when men started saying “we’re pregnant” instead of “she’s.” Is it just a funny line? A character detail? Or does Zahler agree? And one could really argue, no spoilers, that this is a film that asserts that women shouldn't go back to work after having babies. Again, the line between commentary and misogyny feels razor thin in a way that I find fascinating but will almost certainly offend some people.

Whether or not you can roll with Zahler’s provocations is one thing, but it’s impossible not to admire how he’s developed as a filmmaker. His framing here, shot by his regular collaborator Benji Bakshi, is beautiful. Everything looks confident without calling attention to itself in a way that a lot of Tarantino and Leonard acolytes often do. Most of “Dragged” is shot in low light, especially the final hour, but Zahler has a great sense of space and blocking, which helps keeps the film engrossing. And he draws a fascinating, world-weary performance from Gibson, who reminds one how good he can be with the right material.

In every way, “Dragged Across Concrete” feels like it’s trying to challenge you. It’s a little racist, a little sexist, almost aggressively slow—we watch Vaughn eat an egg salad sandwich in what feels like real time—and incredibly violent. It is a great lost Elmore Leonard book that’s been slowed to a crawl and updated to reflect the impact of political correctness and smartphones on characters who used to be able to operate in the shadows. In a sense, it pulls the classic, tough cop characters from great fiction and drags them across the concrete, leaving everyone bloody and battered. You will feel it too. 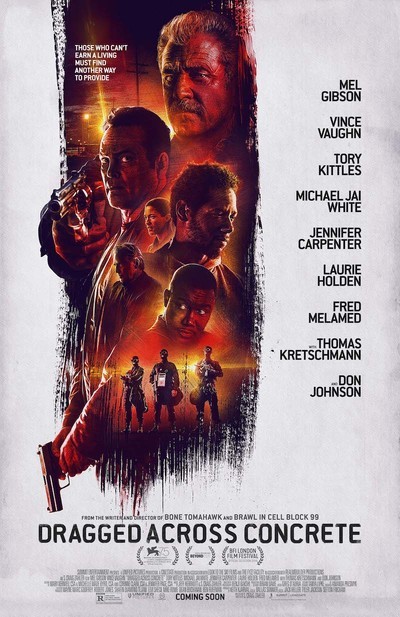