An odd mix of beautifully bleak atmosphere and hammily mannered performances, "A Single Shot" is simultaneously understated and overpowering.

This backwoods neo-noir is the latest film from director David M. Rosenthal, who drew some honest moments out of sheer formula in the 2011 drama "Janie Jones," about an estranged father and daughter who connect by playing rock music together. "A Single Shot," which Matthew F. Jones wrote based on his novel of the same name, is actually at its most effective when no one says anything at all.

The first 14 minutes of the film are essentially wordless, with the detailed sound design and cold, blue images of early-morning West Virginia telling the story. A dog barks. Birds chirp. Cows moo. And Sam Rockwell’s clunky boots crunch on the ground as he illegally hunts deer in the woods around his trailer home. (Spaniard Edward Grau, who shot Tom Ford's gorgeous "A Single Man," is the cinematographer.)

With his camouflage baseball cap, scruffy beard and stoic demeanor, Rockwell's character, John Moon, is clearly a man who has fallen on hard times and is struggling to survive. But when he sees movement in the trees and pulls the trigger on his shotgun, he ends up hitting and killing a young woman instead. Naturally, he panics—but as he scrambles to stash the body, he finds her makeshift campsite, which includes a box filled with cash.

In the tradition of films like "No Country for Old Men" and "A Simple Plan," in which ordinary folks find themselves in extraordinary circumstances by making one dangerous decision after another, John takes the money, then finds himself the target of increasingly menacing threats.

His theft is understandable, given that he's lost the family dairy farm to foreclosure and his diner-waitress wife, Jess (an underused Kelly Reilly), has taken off with their young son. He's trying to get back on the right track. But clearly the money belongs to someone, and not a good someone, which leads to a parade of actors (most of them Brits) doing garbled Southern accents in tattoos and trashy clothes.

Among them are Joe Anderson as a sinewy crackhead with the ominous name of Obadiah and Jason Isaacs as an omnipresent sadist named Waylon. Jeffrey Wright shows up in a couple of scenes as John's only friend, the hard-partying Simon, but the character is so drunk so often that it's often impossible to tell what he's saying. This is especially problematic given that his main function seems to be arriving in the third act to explain to John the intertwined allegiances of the various small-town scuzzballs who are after him.

Also crammed into the cast is William H. Macy, who may be a villain or just an opportunist. He plays a longtime lawyer with the impossibly folksy name of Daggard Pitt. With his plaid sport coat, floral tie, cheap toupee, disabled arm and limping gait, he's more a collection of quirks and tics than a real person. Even an actor of Macy's experience and versatility can’t make this character feel like flesh and blood.

Macy's presence is actually a hindrance in some ways. Rosenthal has cited Joel and Ethan Coen among the many esteemed filmmakers who influenced him here. The fact that Macy starred memorably in one of the greatest of the Coens' films, "Fargo," only reminds us of the inferiority of "A Single Shot."

But it's always good to see Rockwell. Always. Speaking of versatility, he really can do anything. The gruff and gravelly John Moon is an unusually low-key role for him—especially compared to his swaggering, scene-stealing supporting turn this summer in "The Way Way Back"—but he conveys a great deal about his character in small, subtle ways.

Subtle is not a word you would use to describe "A Single Shot," though, as it reaches its climactic conclusion—and in case we couldn't figure out for ourselves that lives are at stake, the screechy, insistent score from Icelandic composer Atli Orvarsson spells everything out for us. 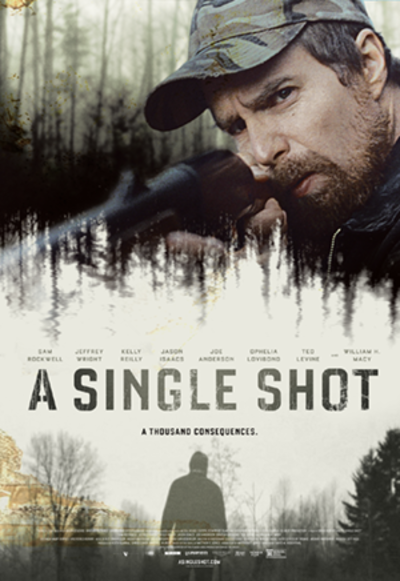