The Pebble And The Penguin

I feel funny bringing this up in a review of an animated film for kids, but the greatest travel book ever written is The Worst Journey in the World, by Apsley Cherry-Garrard. He was a member of Robert Falcon Scott's doomed expedition to the South Pole, but the journey he writes about is his own trek of five weeks in the southern winter of 1911, with two other men, on foot, for 67 miles across broken ice peaks, hauling their own sledges through the polar night, in the coldest temperatures on earth, to discover the secrets of penguins and their eggs.

In the introduction to his great book, Cherry-Garrard concludes: "Take it all in all, I do not believe that anybody on earth has a worse time than the Emperor penguin." Now you see the connection, since "The Pebble and the Penguin" is about these very same creatures, which are perhaps the most primitive birds on earth.

So now here's this jolly cartoon about a shy bachelor penguin who engages in the ancient penguin ritual of selecting a pebble from the beach and presenting it to the lady penguin of his dreams. But the hero of the story (named Hubie, voiced by Martin Short) is swept away before he can propose to the beautiful Marina and rescued from a zoo boat by the clever penguin Rocco (voiced by Jim Belushi), and returns home, of course, after learning that (all together now) yes, penguins CAN fly! The story is so drippy and inane that I found my thoughts drifting back to those lonely birds Cherry-Garrard discovered at the midpoint of the Worst Journey. The males spend long months in total darkness and gale winds, at temperatures 100 degrees below freezing, sitting on an egg. That is the high point of their year. It is also interesting, which is more than can be said for the story of this movie.

What bothered me most about "The Pebble and the Penguin," even more than its inanity and the sappy Barry Manilow songs ("One perfect pebble, just one humble stone, but oh, what a stone can do . . .") was something that annoys me in a lot of children's animated features: color-coding.

If there is one constant in feature cartoons, it's that the evil characters have darker complexions than the heroic ones. At first, I thought maybe I was imagining this, until I realized there were no exceptions to the rule, no movies where the good guys were dark and the bad guys were light.

In "The Pebble and the Penguin," we have to start, I guess, with a definition of what constitutes a penguin's complexion. Most of their coat is black, but not their facial areas, except for around the nose. The rest of their facial coloring is white, in the case of Hubie and all of his friends. But when we meet the evil Drake, a villainous penguin, the corresponding areas on his face are chocolate brown. That goes for Drake's sidekicks.

What do kids learn from this? Nothing overt. Just a quiet, unstated impression: White is good and brave, and brown is scheming and negative. Reinforce that through lots of cartoons (examples: "Aladdin" and "The Rescuers Down Under") and no wonder even black children choose white dolls in some psychological experiments.

Sociologists who wonder how children's values are formed might start by studying the animated films that kids like to look at on video over and over and over again, until they know them by heart - having learned all the lessons, even the unstated ones. 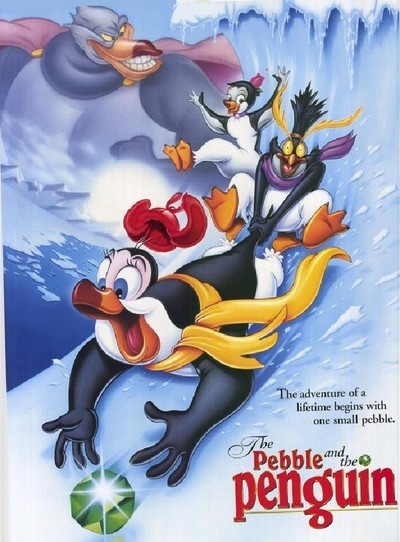