The unlikely beauty of Charlie Brown is that no matter how many times he flails and fails, he keeps trying. Whether he’s humiliated in front of his classmates, tangled up in kite string or knocked on his butt on the pitcher’s mound or football field, he gets back up, dusts himself off and gives it another go. He isn’t content to let the blockhead nickname define him. He consistently strives to improve—to surprise us all and even himself.

As antithetical as it may seem to his insecure, underdog persona, Charlie Brown is actually a pretty ballsy dude.

“The Peanuts Movie,” by contrast, is all about playing it safe. It’s all about repackaging and regurgitating what we’ve already seen and what we already know. It takes ideas, images, plot points and even verbatim bits of dialogue from previous “Peanuts” incarnations and projects them onto the big screen for a new generation without breathing much new life into them. It’s disappointing and actually kind of cynical in its unwillingness to try anything even vaguely innovative with these beloved characters.

Not that the world needs a post-modern version of the late “Peanuts” creator Charles M. Schulz’s decades-old vision. The film from director Steve Martino (“Ice Age: Continental Drift”)—written by Schulz’s son, Craig, and grandson, Bryan, along with Cornelius Uliano—stays true to the timeless innocence and warm-hearted humor of the later comic strips and enduring television specials. There’s nary a smidgen of snark to be found, which is refreshing in its own way.

Telephones still have cords, Snoopy still pounds away on a manual typewriter and the few adults who exist are never seen but merely heard in a garbled wah-wah. Soulful Schroeder still plays a toy piano, sassy Lucy still doles out psychiatric advice from her sidewalk stand for just a nickel, loyal Marcie still calls bossy Peppermint Patty “Sir” and all the kids’ G-rated adventures seem that much more delightful with Vince Guaraldi’s jazzy score as a backdrop.

Despite the forward-thinking technological choice of using 3-D animation, “The Peanuts Movie” hews closely to the cheerful color palette and simple stylistic touches of Schulz’s aesthetic. And all the characters you know and love are voiced by actual child actors, which gives it an immersive authenticity.

It’s all completely charming until you realize very quickly that there isn’t much going on here besides a wallow in nostalgia with little narrative drive.

It brings me no joy to report this to you, I should add. I was a huge fan of all things “Peanuts” as a little girl—I even had Snoopy and Woodstock sheets on my twin bed—and I’m now the mother of a six-year-old boy who regularly pops classic TV specials like “It’s the Great Pumpkin, Charlie Brown” and “A Charlie Brown Christmas” into the DVD player. I even did that thing where you can create a “Peanuts” character version of yourself online. I am the target audience. I was all in.

But even my son realized that “The Peanuts Movie” is sweet, gentle and not much more. (He also knew immediately when he heard Peppermint Patty say to Charlie Brown: “You’re holding my hand, Chuck. You sly dog,” that the line had been lifted straight from “A Charlie Brown Thanksgiving.”)

The film essentially consists of a series of vignettes tied together by a couple of intertwined through-lines: Charlie Brown (voiced pretty darn perfectly by Noah Schnapp) tries to work up the nerve to talk to the mythological Little Red-Haired Girl (Francesca Capaldi) while his trusty beagle, Snoopy—in his rich fantasy world as the World War I Flying Ace—tries to woo a comely female pilot named Fifi (Kristin Chenoweth) while also battling his nemesis, the Red Baron.

Simply describing the plot makes it sound like it’s too much, but it’s simultaneously not enough. After a lively opening sequence in which the kids realize it’s a snow day and bound joyously out of their homes and onto the ice, the pacing settles into a lull from which it never even tries to emerge.

Time and time again, these characters and all the others do exactly what you expect they will do—no more, no less. Lucy (Hadley Belle Miller) pulls the football away, just as Charlie Brown is about to kick it. Linus (Alexander Garfin) says something quietly insightful while clutching his blue blanket. Sally (Mariel Sheets) lovingly refers to Linus as her “sweet baboo.” And Snoopy swoops in and steals the show, every time.

It’s all harmless and reassuring, and a totally suitable first film choice for the smallest kids in your home. It won’t ruin their childhood or memories of your own. But it could have been great. 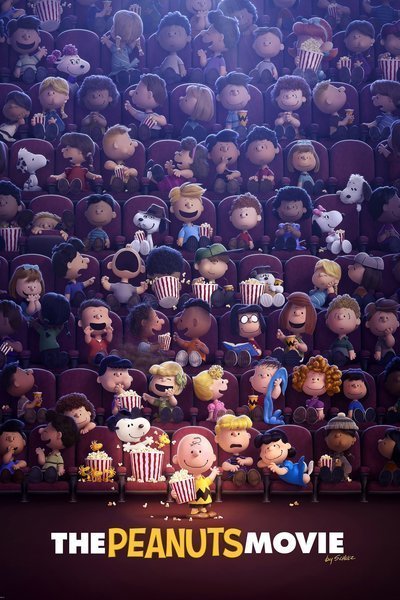