Steve Carell spends much of “The Patient” chained to the floor of a basement, acting as a psychotherapist to his captor, a serial killer named Sam (Domhnall Gleeson). Not only does Carell’s Dr. Alan Strauss toil around the mind of a killer, he eats takeout with him and offers him advice because his life depends on it. Sam knows enough that he needs help, but he has gone about it in such unethical ways. Sometimes Alan is even speed-therapizing, as when there’s a potential future victim in the boiler room, and Sam's urges to kill seems ready to take over.

“The Patient,” created by Joel Fields and Joseph Weisberg, tries to engage true crime culture by finding its own snazzy way into the mind of a killer, while engaging with our hunger to psychoanalyze a disturbed character. The premise of it runs out, leading to a runtime that does a disservice to the pieces that can be effective within one man’s quest to get his captor to learn what it feels like to be in someone else’s shoes. "The Patient" is a long journey to create empathy in the darkest of minds, but overall it makes for an overlong, dull mind game.

Directed in part by Chris Long of FX's "The Americans," "The Patient" is stuck in how to make this often two-hander set-up visually interesting; instead we get more dread from the details of the basement, like the unlocked glass sliding doors that are ten feet in front of Alan's reach. Episode by episode, "The Patient" repeats beats of looking at Carell’s face, exhausted, collecting his thoughts, stuck. There are daydreams that take us to his past, and to his own therapist, tangents that become more interesting than the frantic therapy sessions.

Known as the "John Doe Killer" for how he steals the wallets of his victims, Sam proves to be the dull symbol of a regular American psycho. For how searching the role itself is—so desperately trying to say something about Dunkin’-sipping, compulsive, antisocial mama’s boys who like Kenny Chesney—Gleeson comes up with so little. The portrait of a serial killer painted here is too heavy on the presentation, with extra bushy eyebrows to go with extra vacant stares, and the flatness of Gleeson’s line-delivery bleeds into the killer’s general monotone presence. Gleeson portrays this killer like a robotic brat. Instead of becoming more chilling, it’s eye-rolling.

Part of this comes from how Sam is portrayed—the series doesn’t lean enough into the absurdity of the concept, of this free-therapy-achieving captivity mixed with Sam's extra bad behavior. Brief moments of terror are presented ho-hum, as with a murder in parking lot that’s staged with little flair, and continually stretches the convenience that this serial killer still has not been caught after all this. “The Patient” does not favor showing violence, but it also doesn’t know how to make a sudden cut to black, usually with a surprised character gasping, register as all that terrifying.

There is a sentimental undercurrent to “The Patient” that rises to the surface throughout, in large part thank to Carell’s contemplative performance. In his captivity, Alan spends time thinking about his own relationship with his son Ezra, who became Orthodox (an “extreme Jew,” Alan calls him) and estranged from the family. When Alan’s wife, a Jewish cantor named Beth (Laura Niemi) died of cancer, that created even more tension. The series returns to Alan's reevaluations about Ezra almost as a respite from the basement, and it becomes repetitive. It’s a long-winded way for the series to get to these feelings and revelations that could be poignant in smaller dosage.

Carell helps fashion this as a survival story as well, in Alan collecting his sense of inner strength that comes from his faith—including a vision of the Man’s Search for Meaning author Viktor Frankl at the concentration camp that inspired said book. The weak tension in the plotting doesn’t feed a nervousness about Alan's survival, but we can at least see the endurance at stake in Carell’s progressively weary gaze. All the while, he must have a calm voice while using different therapeutic methods on Sam, strategizing ways he might convince Sam to eventually let him go.

“The Patient” is the type of elongated series that prevails more with its sentimentality than its dramatic execution, in part because the former is more precious than the latter. Its heart is in the right place, especially as a text that believes in therapy and empathy. But its mind wanders in circles when making one get what it’s trying to say.

Full series screened for review. "The Patient" premieres on FX on Hulu on August 30. 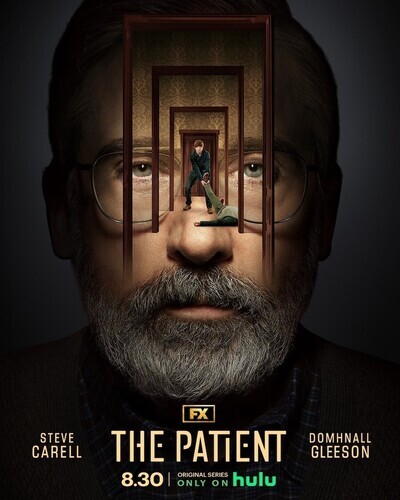