The story is so stripped down it feels like minimalist theater. A woman (the incredibly expressive Golshifteh Farahani) sits in a room attending to her somewhat older husband (Hamid Djavadan), who lies unconscious. We're in a war-torn country, and the man has been a rebel fighter, but has been shot in the neck, and, we learn, has lain silent and unaware for days. The name Afghanistan is never said. The woman and man—and in fact all the characters—remain nameless.

The woman talks. At first it seems like she is trying to reach through the fog to her husband in hopes he might awaken. But gradually, the talk becomes a form of confession and therapy. She recalls their wedding: He was too busy fighting to attend, so she was 'married' to a photograph. She recalls her innocence and his brutality. As the days pass, each new story she tells (a curious Scheherazade, whose listener is utterly indifferent rather than engaged by her tales) shows us more about her inner life. Some of her revelations are shocking.

When two soldiers arrive, she tells them she is a prostitute to explain why she has remained (she's hidden her unconscious husband in the closet, which sounds funny but in the moment is terrifying). That disgusts one of them, who berates her for failing to follow the teachings of the Koran. But the other soldier (Massi Mrowat), an awkward young man with a stutter, returns later on his own, hoping for a sexual education. Shockingly, the woman accepts. Even more shockingly, that is not the most shocking thing that happens in the film.

Writer/director Atiq Rahimi is working from his novel, and at times the film feels trapped by its novelistic premise. The woman's voice, her way of telling a story, are compelling; even while reading subtitles, it's easy to hear the poetic quality of the words and the power of Farahani's voice. But even with Rahimi's sensuous attention to visual detail (the bird pattern on the curtains, the way shadows change depending on the time of day), and with flashbacks to that strange wedding, the film feels oddly static, like watching a great stage actress being filmed while delivering an incredibly sustained monologue.

Two factors help the movie overcome that static feeling. First, the story she tells is a revelation. The details of the woman's life are like a crash course in the sociology of a country living through turmoil, under the twin constraints of strict religion (the local mullah keeps coming by to check in on the husband, but his advice has mostly been to wait it out) and a constant state of war (the neighborhood has been reduced to rubble and most neighbors have fled). Second, there is Farahani, who uses her eyes with all the power of the great silent stars. With the subtle shift of a few muscles, she can convey a world of thought behind those eyes. She is so compelling that you may wish the film gave her more to do than look expressive. 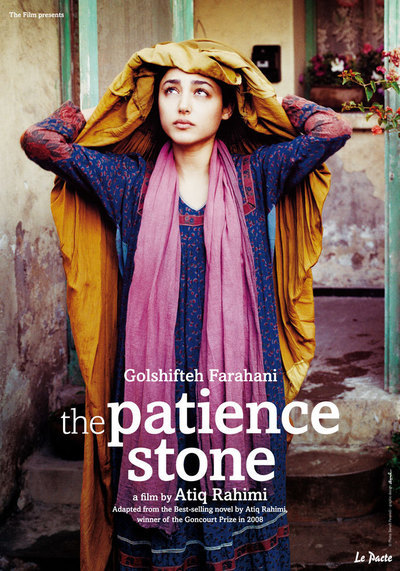 Golshifteh Farahani as The woman

Hamid Djavadan as The man

Hassina Burgan as The aunt

Massi Mrowat as The young soldier

Mohamed Al Maghraoui as The mullah

Malak Djaham Khazal as The neighbor