Sally Potter is a filmmaker who deserves to be more decisively seen and heard. I’m not one for avidly going to bat for socially-purposeful art, but I dare say that Potter, whose films have long addressed gender identity, political commitment, feminism, capitalism, and other concerns is absolutely, in the parlance of the times, one of the Filmmakers We Need Now.

And so here she is, with a new and very powerful film, one which begins with a rage-filled Kristen Scott-Thomas opening, from the inside, a house’s front door (with an ornate brass lion’s head knocker) and pointing a gun at the camera, which is, we infer, adopting a guest’s-eye view.

Some party! The credits proceed with gentle accompaniment of a guitar (played by the great musician Fred Frith, a frequent Potter collaborator) striking the uplifting tones of the William Blake hymn “Jerusalem” which extols a particular ideal for “England’s green and pleasant land.” Scott-Thomas’ character, Janet, is a progressive idealist turned successful politician, and the title party, a small affair, is meant to celebrate her promotion in the British government. Her partner, Bill (Timothy Spall) sits in the living room and spins immaculate vinyl on an immaculate sound system while Janet, still relegated to conventional female host roles cooks—and fends off texts from a romantic admirer who is obviously not Bill. The first arrivals are April (Patricia Clarkson) and her boyfriend Gottfried (Bruno Ganz), an aroma therapist (he calls himself a “healer”) from whom, she almost immediately announces, she is separating. Bill offers Gottfried some wine, and Gottfried cheerfully says, “Actually I’m not drinking alcohol at the moment.” Upon hearing this, poor Bill looks as if Gottfried had just murdered his best friend. Gottfried takes it as a joke when Bill says, “I’m Bill, or at least I used to be,” but we will discover that he’s not kidding.

Clarkson’s April is the real pistol of the group, so to speak. “I expect the worst of everyone in the name of reason,” she pronounces at one point. She expresses snide disapproval of the incoming guests. There’s Martha (Cherry Jones), whose partner, Jenny (Emily Mortimer) soon follows to inform her that they are expecting. And not one kid, but triplets. Arriving soon after is Cillian Murphy’s Tom, one half of a seemingly universally admired power couple, the female half of which is mysteriously missing. Speaking of pistols, Tom is carrying a real one, and regularly snorting up powders in the bathroom, the better to psych himself into using it, one supposes, but the only thing it really does is make him sweat a lot. As sarcastic bon mots are traded, political observations made, and personal revelations dropped, whatever is in the kitchen’s oven begins to burn, escalating tensions.

This is a beautifully conceived and executed chamber comedy/drama with tragedy at its core. Potter’s characters are committed to a better world even as they make their own modes of living completely dysfunctional. The convoluted relationship knots that bind these characters are in some respects hangovers from the counterculture, but Potter isn’t doing anything so facile as renouncing the counterculture’s politics. Instead, “The Party” is a fierce, trenchant look at how prevailing social mores coopt political commitment when we’re not even looking. And once Bill tells why he “used to be,” the movie’s debates and squabbles move into territories of existential dread.

As serious as things get, “The Party” never stops being funny, sometimes terribly so. “I believe in truth and reconciliation. Truth and reconciliation” says a broken-down Janet near the end, right before biting into her own wrist. Shot in a velvety widescreen black-and-white, performed with utmost commitment by its unimpeachable cast, it’s by my lights the first must-see movie of 2018. 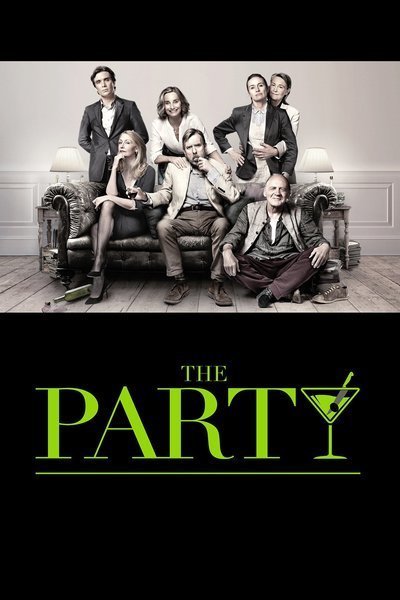