An old and disillusioned martial arts instructor bites the dust at the start of the Asian-American martial arts family comedy “The Paper Tigers.” And as Sifu Cheung (Roger Yuan) lays dying, his killer makes a suggestive hand gesture, as if he were somehow in tune with Cheung’s ebbing life force. Now it’s here, now it’s gone.

The plot then kicks in, and we follow a trio of Cheung’s estranged students as they reunite with each other—and themselves. They’re out of shape, out of practice, and out of original ideas, but still basically charming. That’s thanks in no small part to a strong ensemble cast, led by character actors Alain Uy, Ron Yuan, and Mykel Shannon Jenkins, but also because of the sheer indestructibility of the family and martial arts movies clichés that writer/director/editor Tran Quoc Bao uses throughout “The Paper Tigers.” Many jokes are driven into the ground and a few complex human emotions are steamrolled into brittle sitcom-style dialogue and attendant punchlines.

But the fight scenes, which were choreographed by action director Ken Quitugua, are good enough to make up for a lot of one-note jokes and oft-recycled platitudes. “The Paper Tigers” isn’t exactly the most challenging action movie, but it is comforting whenever it most needs to be.

The best way to enjoy “The Paper Tigers” is to ignore most of its belabored setup, and focus on how character (and mood) are established through on-screen chemistry. Mostly because Bao’s characters are only so interesting unto themselves. Danny (Uy) is a cocky divorcee who answers work calls instead of spending time with his pouty son Ed (Joziah Lagonoy). Hing (Yuan) is overweight and ... well, that’s mostly it for Hing. And Jim (Jenkins) is in shape, but has forgotten his master’s lessons. Together, this trio—formerly known as the “three tigers”—reunite to find Cheung’s killer. Their quest for answers doesn’t go as planned since, as you might imagine, Cheung’s killer isn’t who Danny and his friends think it is.

Still, Danny and his buddies take their time getting to wherever they inevitably need to get. They begin by sparring with a trio of uncouth, but athletic young “punk-asses” who claim to be Sifu Cheung’s students. But how can that be, Danny and his over-the-hill buddies protest: Sifu Cheung only had three students. (“We might be a disgrace, but Sifu had only three disciples”) Times change, even if certain contrivances die hard.

So Danny and his friends reunite, fight among themselves, and even confront their adolescent rival Carter (Matthew Page), who has grown up to be a stereotypically territorial white guy who also knows kung fu. Danny and his guys also fight Carter, but only after exchanging some weak trash talk (we get it, Hing is overweight). Though even those back-and-forths are more satisfying than Danny’s rote and drawn out conversations with his standoffish ex Caryn (Jae Suh Park). She scolds him in an early scene—“When you say you're going to do something, do it"—so you can imagine how Danny’s domestic sub-plot concludes.

Thankfully, life lessons are most often learned during the movie’s action scenes, which all have a satisfying mini-narrative, and even a few surprising twists. Bao’s characters are allowed to be flawed and entertaining during these set pieces in ways that their posturing dialogue often doesn’t permit. Even though Danny and his friends’ canned sparring matches still basically go down the way you might expect them to, especially when Jim takes on a young Asian-American who’s a little too eager to use the “n” word.

There are also a few scenes where characters—especially Hing—prove to be (a little) more than just a good-natured means to a stuffy, talking-points-friendly end. Hing’s got a great, though brief character moment when he, sitting with Jim at a diner counter, summarizes how he feels about Sifu Cheung. That brief speech is the centerpiece of one of the movie’s most visually dynamic scenes, right alongside the final round of Danny’s climactic fight with Sifu Cheung’s killer.

Bao’s got good instincts as an image-maker, even if his script isn’t often as compelling. In a later scene, he delivers a great payoff to a concept that’s introduced early on, about the sound of good martial arts. Hing argues that you can always tell when somebody is doing good “gung fu” just by listening to them work a heavy bag. Several scenes later, Bao tests that theory—and for a moment, there’s something to Danny and his buddies’ frustrated quest to jumpstart their waning mojos. Enough to get you past the next Caryn scene, which is typically well-intended, but dramatically inert.

“The Paper Tigers” is still very much a martial arts movie that ends with a late-night rooftop fight, and then a celebratory dim sum meal. But if you already like this sort of lightweight crowdpleaser, you’re bound to find something worthwhile here. 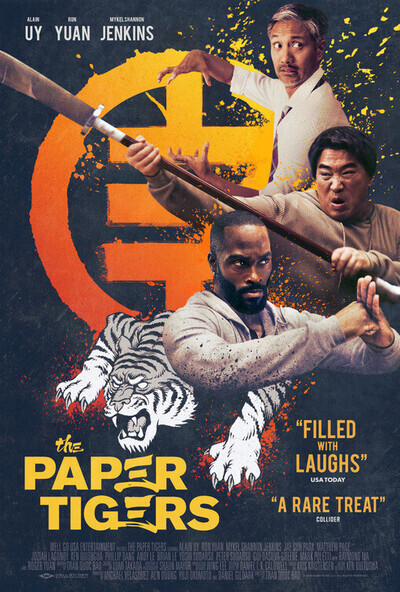 Rated PG-13 for some strong language, offensive slurs, and violence.