After struggling to be taken seriously as the Joker in “Suicide Squad” and being the arguably least impressive component of “Blade Runner 2049,” Oscar-winning actor Jared Leto has another big swing-and-a-miss with “The Outsider,” available on Netflix today. Contrasting the flair of those performances, Leto goes for a cold and calculated gang member, playing a former WWII soldier in 1954 Osaka, Japan who gets caught up in the murderous business of the yakuza. But as the story bloats to two hours by mistaking itself for an epic, “The Outsider” falls into a pit of boredom somewhere between the white savior complex of Tom Cruise in “The Last Samurai” and the much slicker kills by Alain Delon in “Le Samourai.”

Leto’s character Nick finds himself in such an underworld after he helps save the life of a yakuza man named Kiyoshi (Tadanobu Asano), who offers him a home within the gang. With us still being unsure of why he is in a Japanese prison in the first place, Nick accepts the new life with scant hesitation. It isn’t long before Leto is able to robotically beat up people with their own typewriters or shoot them with the quickness of John Wick, all under the tutelage of the Shiramatsu gang's aging boss (Tin Manaka) who becomes like a father to him. As Nick becomes further legit in the yakuza world, referred to as gaijin ("outsider") every now and then by his new peers, he also sparks up a love interest in Kiyoshi’s sister, Miyo (Shioli Kutsuna).

Nick has a front seat to the growing turmoil between the Shiramatsu gang and the competing Seizu gang, whose turf war fails to create tension itself to the story. At first it’s a disagreement over the port of Osaka; later it’s about a joint investment in radios. Genre fans will nonetheless get a few gruesome kills after making it through these dull passages, but director Martin Zandvliet has little eye for action here, chopping up or flattening bursts of violence, robbing them of their explosiveness. “The Outsider” proves to be even clumsy with brutality, aside from a scene where Nick and others ceremoniously, and disturbingly, chop some of their fingers off, as in one of “The Outsider""s stone-faced presentations of yakuza rituals.

“Jared Leto in a yakuza drama” isn’t the most palatable of pitches, but that somehow turns out to not be the movie's biggest problem. It’s less the strangeness of stubbornly inserting a white American into a world of Japanese men, than it is how this movie does very little with Nick's specific background to make the cringing idea worthwhile. As it starts, Nick does have an odd, somewhat intriguing fish-out-of-water presence, but that angle is softened, aside from seeing him being dismissed often in English. “The Outsider” could be about any random Japanese person who doesn't know how far the yakuza rabbit hole goes. But then “The Outsider” wouldn’t be a yakuza drama starring Jared Leto, which is just about all this project wants to be.

Still, casting Leto is not enough to fill in his very empty character, who is left to be a huge mystery for reasons that are themselves unknown. We get pieces of backstory about how he left service sometime after World War II, thanks to a clumsy insertion of another American soldier played by Emile Hirsch. Skinny and monotone, Leto’s take on a reserved tough guy in a brutal underworld lacks the desired grittiness, even if he’s doing something similar to Ryan Gosling in Nicolas Winding Refn’s “Only God Forgives.” But when it comes to creating an arc, it’s all superficial, the way that he becomes very good with a samurai sword, or unflinchingly ruthless as a yakuza. Even his Japanese skills go from not knowing the language to being able to hold his own in a conversation, without a sense of growth in between. Within the scope of “The Outsider,” it’s the equivalent to superheroes like Doctor Strange simply mastering their powers, instead of earning them through visible hard work (as Angelica Jade Bastien said in her review of that film).

But take Leto out of the picture and you have an even less noteworthy movie, a yakuza tale with an originality deficit. Zandvliet’s idea behind constructing his take on the crime world is to put a bunch of anonymous, scowling Japanese men in suits in desaturated rooms, and drag us through some yakuza-legitimizing rituals. But the non-Leto performances are reduced to plainly stoic, as the efficient likes of Asano or Tanaka aren't given thorough characters either, and in turn fail to add some immediacy to “The Outsider”’s imploding third act of betrayal and bursts of violence. They simply become servants tasked with trying to legitimize this star vehicle, with everyone pretending that “The Outsider” is more than just the equivalent of a yakuza melodrama. 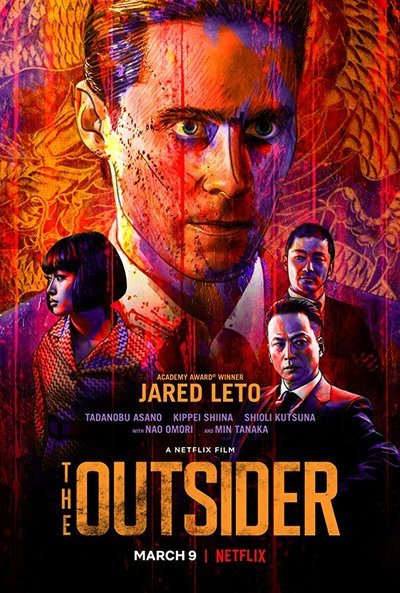