“The Outrageous Sophie Tucker” is an outrageously dull documentary. This is not the subject’s fault. In her six-decade career, Tucker never failed to be interesting and complex. Here was a woman whose career started out in vaudeville and lasted through the advent of rock and roll. Her powerful voice and brassy personality made her one of the biggest stars who ever lived, to the point where people named their kids Sophie in her honor. A decade after her death, Kander and Ebb name-checked her in "Chicago." Her career influenced everyone from Mae West to Bette Midler, and she was known to be as raunchy as they were, perhaps raunchier. Tucker befriended several U.S. presidents, some of whom dropped everything to take her calls. She was also the first person to pen and promote an autobiography, which she sold at her appearances. If you wanted to talk to Sophie, you had to buy her book.

These details only scratch the surface of Sophie Tucker’s life. And yet, somehow, director William Gazecki made a film that lacks any of the fascinating nuances, details and complexities of a life this richly lived. “The Outrageous Sophie Tucker” plays like a re-enactment of a Wikipedia page written by someone too terrified to delve below the surface of hagiography. The film has no visual style whatsoever, and the occasional use of a weird special effect that turns still pictures into marionette-like animations feels cheesy and cheap. Interview clips are thrown haphazardly at the screen with no point of reference as to when they had been recorded, and several of them feature someone rambling on for minutes on end in what looks like a prison interrogation room.

For a talking-heads documentary to work, the interviewees must have interesting, informative and perhaps scandalous stories to tell about the subject at hand. A close-up of a person merely spouting information is not particularly of visual interest, so we must rely on the story they’re telling to keep us engaged. “The Outrageous Sophie Tucker” gives us celebrities such as Barbara Walters, Carol Channing and Tony Bennett, relatives of Tucker like her grand-niece and even the film’s producers, Lloyd and Susan Ecker, who wrote their own book on Tucker. Outside of the Eckers, who occasionally provide context based on their research of Tucker’s own extensive journals, everyone spouts the usual things you’ve already heard in countless documentaries like this. “Oh she was the greatest at this and the best at that!” people mutter in generic clip after clip, never providing more than cursory details before being shuffled offscreen.

Meanwhile, the filmmakers gloss over some of the darker elements of Tucker’s life and tiptoe around others. They’re also rather stingy with doling out examples of Tucker in action, though the film’s opening features a long clip from “Gay Love,” a British movie she made in 1934. It’s a great way to kick off the documentary, because it made me want to see and hear more of Tucker’s work. Here was a woman who preceded Mae West in the salacious, double-entendre filled sex talking department, yet I don’t recall seeing any comparative examples. At one point, Ecker says Tucker had a song whose lyrics are tame now, but were scandalous back then. I expected to hear this song, along with an explanation of its delicious nastiness, but no such scene followed the comments.

The details we do get about Tucker are intriguing enough to inspire frustration at the filmmakers’ refusal to probe more deeply. Tucker was the original queen of self-marketing, advertising everything from beds to the exercise equipment she’d never use. Proud of her thickness, Tucker preached the gospel of loving one’s plus-sized self by singing a song with the gorgeous title “Nobody Loves a Fat Girl, But Oh How a Fat Girl Can Love!” She had no problems getting men, despite the societal notion that only thin women were attractive. She considered herself “the last of the red-hot mamas,” and her self-confidence would make Madonna seem shy. She started out in blackface, yet came to the defense of Josephine Baker decades later when Baker made her return to U.S. stages. Tucker had enough pull to scare the racist Southern audiences into behaving, telling them “if she doesn’t perform, I won’t either.”

Additionally, we hear the bittersweet story about a WWII soldier fan of Tucker’s whose goal is to play Sophie Tucker’s most famous Yiddish song in the liberated streets of Nazi Germany. The way this is handled proves that the filmmakers had it in them to make a compelling documentary that pulled together both darkness and joy in its celebration of Sophie Tucker. After all, they had her autobiography and hundreds of her journals to work from here. Tucker documented everything, but while we get a sense of her achievements, we never get a true sense of her as a person. I wanted to know more about what she thought and how she felt about successfully traversing the “man’s world” of show business. This is a standard doc about a woman who was anything but standard.

The one plus of “The Outrageous Sophie Tucker” is that it made me want to read Tucker’s autobiography, “Some of These Days.” Something tells me it will be far less timid, and far more outrageous, than this movie. 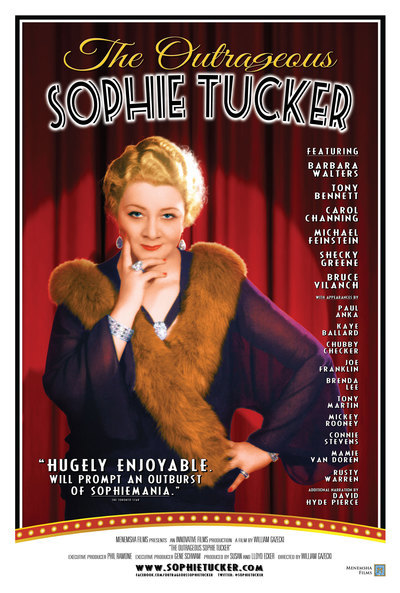