Watching Walter Matthau and Jack Lemmon make the talk show circuit, trading one-liners and barbs like a vaudeville team, I imagined a documentary simply showing them promoting this film. They're funny, familiar, edgy and smart. “The Odd Couple II” is none of those things, and a much longer list could be made of other things it is not.

Lemmon and Matthau are perfectly suited for working together. In life as in fiction, they are a little like the original odd couple, Felix and Oscar: Lemmon concise and tidy, Matthau rambling, shambling and gambling. When they're given a decent screenplay, as in the original “Odd Couple” (1968) or last year's engaging “Out to Sea,” they're fun to watch; their timing is impeccable, and you can sense their joy of work.

“Odd Couple II” is not, alas, such a screenplay. It has been written by the master, Neil Simon, who in this case is an emperor without any clothes. Did no one have the nerve to suggest a rewrite? To tell him that his story was slight, contrived and flat? Perhaps it seemed to the producers that the combination of Simon, Lemmon, Matthau and the words “odd couple” were a sufficient guarantee of success. The difference between a creative executive and a contract-signer lies precisely in the ability to see, in a case like this, that they were not. (Of course, Simon himself is one of the producers on this film, so in a way he was working without a net.) The story opens 17 years after Oscar and Felix last saw each other. (It's 30 years since the movie, but that would make their children middle-aged, so never mind.) Oscar now lives in Florida, where he plays cards with old cronies and practices trying to hit his garbage can with a Hefty bag from an upper floor. Felix stayed in New York City, where he does part-time charity work at a hospital. They get calls: Oscar's son is engaged to marry Felix's daughter.

This inevitably requires them to fly to Los Angeles, where they plan to rent a car and drive to the town where the wedding is being held (it's “San something,” but they can't remember what). Felix injures his foot while crashing into Oscar at the airport, they rent a car, the car rolls over a cliff and explodes, etc., and they find themselves in a road movie, complete with seamy motels and colorful characters along the way.

Simon's Borscht Belt humor still prevails in the dialogue. (“My sister lost three pairs of dentures in the earthquake.” “What did she do to eat?” “She sent out.”) There are jokes about age, sex and death, and a nice sight gag after they get a lift in a Rolls-Royce driven so slowly that they are passed up first by runners, and then by walkers.

But the movie has no purpose for being. That's revealed by the road movie premise: The genre is ideal for throwing characters and dialogue situations at them without the bother of contriving any kind of a dramatic or comedic reason for them to be together. More honest, and maybe even funnier, would have been the story of the two old adversaries forced to be roommates in a retirement village. The movie slogs on and on, Matthau and Lemmon gamely delivering lines that may contain mechanical wit, but no impulse or dramatic purpose. 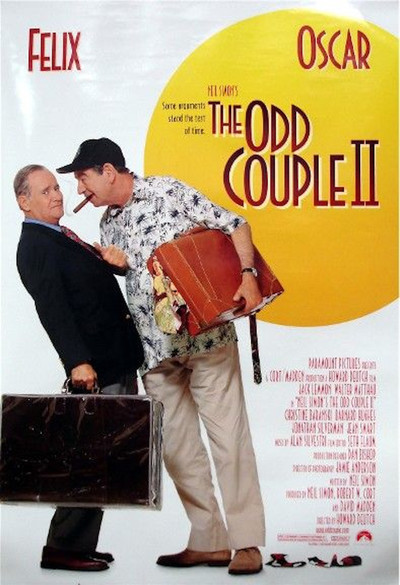