But these characters are simultaneously bland and annoying and their stories aren’t all that compelling, even though commenting on the need to goose them a little to make them more interesting is a consistent through-line. We’re left to guess what’s real and what’s embellished—if we can be bothered to care at all—in director Cody Calahan and writer Peter Genoway’s twisty yarn. The first-time feature screenplay from Genoway is full of swaggering bravado and meta self-awareness, with hearty Canadians enduring various snowstorms in flashbacks within flashbacks. But this narrative device means nothing when the characters are so flimsily drawn, leaving us to wonder for a long time, what’s the point of all this?

Or as the first bartender says to his sole customer about halfway through the film, “You’re telling me this story backwards? If I’m this bored by the ending, why am I going to bother with the beginning?” It’s an excellent question and an apt description of what we’re experiencing ourselves. Things pick up in the last 15 minutes or so—when the point does indeed become clear—but by then, it’s too late.

Peter Outerbridge plays that bartender, Paul, a gruff and grizzled guy who’s been around and seen some things while serving drinks at his modest watering hole in a remote Ontario town. Just as he’s closing up for the night in the midst of a blizzard, a face from the past blasts through the door: Steve (RJ Mitte, “Breaking Bad”), who left for college several years ago and hasn’t been back since, not even when his father died. We know Steve went to college because Paul keeps derisively calling him “College Boy.” Paul is still bitter about this, having been a good friend to Steve’s dad and even paying for his funeral. (They establish all of this in dull and clunky expository dialogue; Paul is especially prone to profanity that’s so gratuitous and uninspired, it clangs.)

But the skittish Steve can explain where he’s been, and he has a story to tell about something that happened at another bar in another remote Ontario town: The Oak Room. He even whips out a cardboard coaster from the place to prove he’s been there. Calahan flashes back to a week earlier on a similarly stormy night, when a bartender named Michael (Ari Millen) was getting ready to close up, as well. Just then, a mysterious, well-dressed traveler (Martin Roach) blows in, freezing and exhausted and in need of a little warmth and a drink. They, too, have a testy exchange, but the visitor provides Michael with the opportunity to tell a story of his own from his childhood, which also happens to take place in a snowstorm. Millen has a sly and slippery way about him that makes him untrustworthy, which also makes him the most interesting person in the film—but that’s not saying much.

Then it’s back to the first bar, where Paul is getting increasingly annoyed with Steve. Paul’s got a story, too, and it involves Steve’s deceased dad, a mechanic named Gord (Nicholas Campbell). But wouldn’t you know it? As the affable, hard-drinking Gord sits at the bar, he also has a story to tell, so we’re stuck watching yet another flashback from when he was about Steve’s age.

Back and forth “The Oak Room” goes, without ever building the tension it ostensibly seeks. Instead, it meanders from tale to tale, and the writing isn’t sharp or specific enough to sustain this kind of complex framework. Working with cinematographer Jeff Maher, Calahan establishes a dark mood off the top that’s intriguing, including some showy camerawork and stark aerial shots of barren trees in the dead of winter. The imagery suggests a foreboding tone that fails to materialize as the film evolves. It’s also never as clever as it thinks it is, until a big twist at the end that changes everything that came before it. By then, it’s long since been closing time. 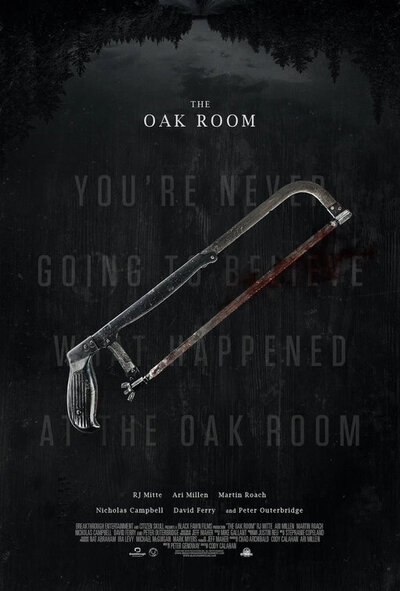