Once she gets offstage, the real-life musical act St. Vincent loses her red-lipstick allure and becomes Annie Clark. No longer beholden to an audience that expects a larger-than-life entity, Annie relaxes into pedestrian activities and a less than exciting lifestyle that involves playing Scrabble. This presents a problem in the meta fiction of "The Nowhere Inn," because Annie's best friend Carrie is hoping to make a raw documentary about St. Vincent.

Consistently astute in how it handles its tonal shifts and point of view permutations, “The Nowhere Inn” is a mockumentary written by Carrie Brownstein and Clark. Both of them star as themselves, or rather scripted iterations of themselves. "The Nowhere Inn" is directed by Bill Benz, a former director and editor from the Brownstein's “Portlandia” universe. Clark has appeared as actress on “Portlandia” (where she was curiously credited as Annie Clark) and directed a segment for the “XX” horror anthology feature.

Entrusted to direct the doc within "The Nowhere Inn," Brownstein brings some ideas to enliven the material. Intensely lit concert footage captured during a St. Vincent tour is peppered in, particularly in the first act, to contrast Annie and her alter ego. But while Carrie adores Annie’s less glamorous personality—they are friends after all—she feels as though such uneventful normalcy would not entice the fans.

To amend the course from boring to slightly more bombastic, Carrie asks Annie to present herself closer to her alter ego, even when not performing. This begins a monstrous transmutation, with St. Vincent allowing the vices of stardom devour all of her relatable traits, empathy included. The more they work on this project, the more St. Vincent wants control over how she appears on camera.

It’s curious but fitting that on IMDb the co-writer is not listed as Annie Clark, but St. Vincent. The name choice seems to make official the film's obsession with one’s curated image in the public; that it comes from the depths of the artist persona, not the depths of the person in non-plastic clothing playing Scrabble after a long day. It could also just be part of St. Vincent's grand performance. Either way, it’s the guessing that induces interest.

Whatever the case, “The Nowhere Inn” (its title taken from a song the co-leads write together in the film) thematically concerns the public’s demand for celebrities to maintain their eccentricity. People like to think the rich and famous are different than us, on a realm of luxury unbothered with the day-to-day preoccupations of the rest of us. They fascinate us because they are unattainable. But the movie fails to factor in current modes of star-fan interaction. Through Carrie, we observe how Annie is treated when she behaves as St. Vincent, as if floating above everyone. Annie's chaotic energy receives praise (and even romantic attention from Dakota Johnson), and she feeds off it.

By the same token, the creators attempt to manipulate reality, and ask us to pay mind to the line between embellishing and deceiving. Somewhere between whimsical and disturbing, Benz's directorial choices seemingly mimic the ones of his on-screen proxy. The choices can be visually inventive, and make it impossible to decipher what is real: transitions crafted from physical film burning; the reframing of memories as if they were on a miniature screen; a sequence near the conclusion that plays out like a series of dreams within dreams.

Such aesthetic panache, however, can't make up for how convoluted the story becomes as it creates more and more distance between both Carrie and Annie, and Annie's artifice and sincerity as St. Vincent. The lack of emotional nuance makes other components repetitive: more dismissive reactions and more self-centered antics. Yes, the celebrated singer-songwriter is impenetrable and for that all the more desirable, but an hour into the film, the villainess disguise isn’t that intriguing.

Brownstein gets a subplot about her ill but very proud father, and yet we miss insight on her fictional directorial voice and why everyone is so impressed with her “finally” doing something artistic despite having a successful television show. With those issues on the backburner, the main conflict pertains to the two women’s dynamic: is it Carrie’s fault for asking for more of her subject in the first place, or is it Annie’s for abusing the request? By the time Carrie reaches a breaking point in which everything in her life seems to be performed, the film has already overplayed its hand building psychological labyrinths.

Plenty watchable and inspired from a visual standpoint, “The Nowhere Inn” is a less refined and less provocative relative of Joanna Hogg’s “The Souvenir,” Brady Corbet's “Vox Lux,” or Robert Greene’s “Kate Plays Christine.” Benz's film has a comparable ambition, but its returns are diminished in its own search of where someone’s lived experience and performance overlap. 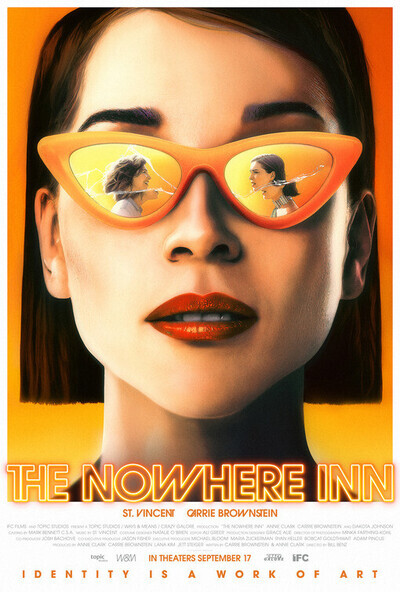 St. Vincent as Herself

Carrie Brownstein as Herself

Toko Yasuda as Herself

Dakota Johnson as Herself