Kourosh Ahari's "The Night," about a couple confronting their relationship demons in a haunted hotel, is a knockout debut—so assured that it stands on its own as a filmmaking achievement apart from its historical significance, which is considerable.

Shot on location in Los Angeles, by a crew in which every department head was Iranian American; steeped in the specific culture of West Coasters of Persian descent; and featuring probably 80% dialogue in Farsi with subtitles, this is the first American-made movie to be invited to screen commercially in Iran. But what's ultimately most impressive about "The Night" is how it manages to feel big despite being a small film, filling up the screen with atmosphere, performance, tension, and a sense of style even though it was shot quickly and cheaply in available locations. Like "The Babadook," "Reservoir Dogs," "Blood Simple," "She's Gotta Have It" and other memorable debuts that amounted to a promise of future films worth seeing, this movie offers additional proof that you don't need a lot of money to make a good movie. You just have to understand your material and your craft, and make sure everyone involved in the production is on the same page, which was obviously the case here.

The story begins with a married couple, Babak Naderi (Shahab Hosseini of “A Separation” and “The Salesman”) and his wife Neda (Niousha Jafarian of “Here and Now”) and their infant daughter hanging out at another couple's Los Angeles home. While it's a pleasant evening for the most part, it's clear that there's tension in the marriage, mainly over Babak's drinking.

On the way home, they fight in the car—mainly over whether Babak should be behind the wheel—and get lost near downtown. Their navigation system is messed up for no apparent reason, and there are a few other dreamlike tells that indicate something is amiss. Running low on gas, they decide to stay in at the Hotel Normandie—one of many plot elements in "The Night," that doesn't necessarily stand up to strict logical scrutiny, since the couple lives 30 minutes away and taxis and ride-shares exist, but it's best to just roll with movie and not go CinemaSins on it—and it's here that "The Night" kicks into "The Shining" mode, with Babak, Neda and their baby checking in and hearing and seeing increasingly scary things.

Ahari and cowriter Milad Jarmooz balance the Kubrickian aspects that you'd expect from this setup and a behavior-based, at times theatrical component that invests all the story's tension in the lead performances and amplifies it with aural, visual and musical flourishes. Rooms, hallways, alleys, and streetscapes that would seem unremarkable in real life are shot (by Maz Makhani) and scored (by Nima Fakhrara, channeling quasi-experimental composers like Ludwig Göransson and Brian Reitzell) to suggest that something eerie or deadly could emerge at any time, from any part of the frame.

Little touches make every moment pop. Notice, for instance, how you don't just see rhythmic pulses of primary colored light from neon signs outside the couple's window, you faintly hear the signs going bzz, bzz, bzz. It's the sort of detail that might not register if you were in a pleasant frame of mind but that can be tortuous when you're fighting with your partner and having trouble get to sleep because of the tension in the room, the bathroom faucet dripping, and those footsteps in the unit above.

The filmmaking pays close attention to negative space, and to what's in focus and what's not. A long sequence plays in a tight closeup of Babak lying in bed facing away from Neda while talking to her. She's out of focus in the background behind him. Eventually things take a turn for the weird, and the fact that you sense that something's not right long before Babak does gives the scene an edge of black comedy that can only come from every component of filmmaking and performance operating on the same wavelength. I've been a horror buff all my life, but (like "The Invisible Man" last year) this movie still managed to show me a few things that I've never seen before—nothing revolutionary in terms of style or subject matter, but subtle variations on known quantities: the cinematic equivalent of a new turn of phrase, or a word that usually means one thing somehow meaning the opposite, thanks to the context in which it's used. You'll know what I mean when you watch the movie.

Once you settle into the vibe of "The Night," you get to a point where you think you can figure out what's going on and what's coming next. That's when the movie switches things up and goes in a different direction—but a rewarding one. Ahari, who also edited the movie, seems to take his cues not just from certain well-known classics of modern horror (and horror-adjacent hotel films like "Barton Fink") but from an earlier mode of mid-20th century European art cinema/psychological drama represented by directors like Ingmar Bergman, who made films (particularly early in his career) where realistic situations were presented in terms of metaphor, or vice-versa, in such a deadpan way that you had to accept that you were seeing a story wherein you were supposed to take things seriously but not literally—as in a dream that feels like it's all actually happening until you realize that too many things feel "off."

Hosseini's hangdog expressions, particularly in silent closeups, have the ragged, carved-from-sheetrock beauty of Benicio del Toro when his characters are struggling towards self-knowledge and not quite getting there. Jafarian matches him, doing a lot with a part that turns out to be deeper and trickier than the opening scenes indicate. Both parties are hiding secrets in deep vaults. Part of the movie's delicate balancing act is figuring out how many pieces to give you, and when, and letting you arrive at correct conclusions or jump to incorrect ones.

There's a sociological or anthropological component happening in the margins: this is also a movie about being foreign born and nonwhite in a white-run, English speaking country, and while this never overwhelms the main story, it informs it, particularly in scenes where the couple interacts with a white police officer (Michael Graham) and a Black homeless man (Elester Latham) whose disheveled appearance and unnerving approach trigger feelings of class anxiety in the couple and momentarily prevent them from realizing that he has something important to tell them.

George Maguire's performance as the hotel's night manager is a standout in a cast filled with gems. He has one of those mellifluous voices that seizes control of a movie the instant you hear it—a honeyed tenor verging on baritone, the voice of a narrator in a very old Hollywood movie—and it echoes in your imagination for the rest of its running time even when he's not onscreen (like Zelda Rubinstein in "Poltergeist," whose delighted "This house is cleansed," once heard, never leaves the mind).

There are two or three moments where you might worry that "The Night" is overplaying its hand or overstaying its welcome, but these turn out to be feints for a jab or knockout punch. The last section is as assured a finale as any I've seen, and the final few shots are bracingly uncompromising, practically a gauntlet thrown down to viewers who treat moviegoing mainly as a chance to prove that they're smarter than the storytellers and can guess what's going to happen before it does.

This is not the kind of film that you try to outsmart. It's not a puzzle. It's something else: the kind of movie you see and think about and argue about, knowing that there's no correct answer to "What happened?" or "What does it mean?" It's as if "The Night" is constantly playing on what we think we know about this kind of movie and recalibrating its approach in every scene to keep us as unsettled as its lead couple, who checked into the marriage crisis equivalent of the Hotel California and worry they might never leave. 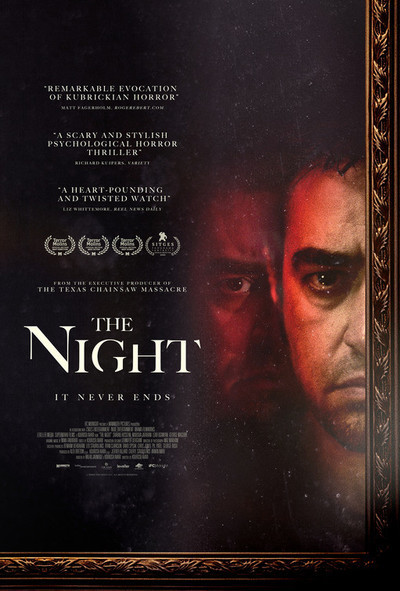