Jonathan Levine’s “The Night Before” is another Seth Rogen joint in which the talented comedian/writer faces adulthood, learning that friendship can survive the journey to maturity. Throughout the raucous, drug-fueled comedy, Rogen’s character and his best friends speak repeatedly of this being the last such bash. It made me wonder if Rogen wasn’t heading off criticism of repetition in the past—yes, we’ve thrown this party before in films like “Knocked Up,” “This is the End” and “Neighbors” but this is really the last time. Whether or not that’s the case, “The Night Before” is a well-intentioned comedy with some big laughs and some big misfires, but it ultimately works because Rogen and his well-cast buddies ground it in a way that makes them likable. A killer Michael Shannon supporting performance never hurts either.

“The Night Before” opens with a literal Christmas tale storybook animation, narrated by Tracy Morgan in a way only he can. We learn of three best friends—Ethan (Joseph Gordon-Levitt), Isaac (Seth Rogen) and Chris (Anthony Mackie)—who have been spending Christmas Eve together for over a decade, since Ethan lost his parents, doing their best to have as much fun as possible acting mostly like idiots. Blowing up snowmen, getting high and going to look at the Rockefeller Center Christmas Tree, singing “Christmas in Hollis” at karaoke—they’ll do whatever it takes to make this holiday more memorable than the last, recognizing that emotions run high at the holidays and trying to keep Ethan positive.

The annual event is straining under the reality of adulthood. Isaac has a loving wife (Jillian Bell), who is well into her third trimester. He’s about to be a father for the first time—there can be no more holiday debauchery. Chris is dealing with a different issue altogether, having a breakthrough season on the football field, although he’s been using steroids to do so, recognizing that a 34-year-old athlete is past his prime. He also seems more concerned with his social media following than his real life. Meanwhile, Ethan is recently split from Diana (Lizzy Caplan), a girl who finally showed him the door after he kept refusing to meet her parents. He not-so-secretly wants her back.

Two events define the trajectory of “The Night Before”—Ethan stumbles upon tickets to a legendary NYC holiday party known as “The Nutcracker Ball,” while Isaac’s wife gives him a box of drugs to enhance the evening’s insanity. As the boys pre-game for the big party to come later that night, Isaac gets deeply messed up, allowing Rogen to display some truly bad behavior as he mixes mushrooms, Molly, coke, weed and more from his box of goodies. Meanwhile, Chris tries to buy some pot to impress the star quarterback on his team, leading the gang to Mr. Green (Michael Shannon), the same dealer they bought from back in high school. Comedy Central stars Ilana Glazer (“Broad City”) and Nathan Fielder (“Nathan For You”) pop up in cameos, and Miley Cyrus appears late in the piece in a very funny scene to remind us all that “Wrecking Ball” is a perfect pop song.

Several of the “bits” within “The Night Before” fall surprisingly flat. Mindy Kaling is wasted as Diana’s best friend, and a scene in which Isaac’s nose drips “cocaine blood” into her drink is horribly unfunny. Another scene late in the piece in which Ethan picks a fight with a couple of drunk guys dressed as Santa Claus also simply doesn’t work. One wonders if the piece didn’t need another rewrite, or if Levine, who has shown solid dramatic chops with “50/50,” was the right fit for this kind of “wacky adventure.” He doesn’t always nail the comedic balance, especially as the piece gets deeper in its characterizations and we’re still supposed to believe these guys are dumb enough to try and steal a horse-drawn carriage (another disastrously unfunny bit). If you’re keeping a ledger, and some of you probably are, “The Night Before” has more scenes that simply don’t work compared to “This is the End” or “Neighbors.”

However, and this is a big however, it has a great cast. Gordon-Levitt and Mackie bring gravity to their roles that would otherwise be missing with lesser, pure comedy actors in the roles. Caplan and Gordon-Levitt have honest chemistry, and Levine seems more invested in their arc than most directors would be. We want to see these characters happy, and that matters more than you might think. They're not merely joke mouthpieces like in a Happy Madison flick. They're real people played by excellent actors. Their narrative quest for comfort under the Christmas tree doesn’t feel like the cliché that it otherwise would because Levine and his trio of actors invest in it completely. And Michael Shannon steals every scene he’s in as the wisest pot dealer in the Big Apple.

“The Night Before” has enough bad jokes to at times make you wonder if Rogen shouldn’t have matured out of this subgenre one movie earlier. However, it ends strong. The last half-hour is the best in the film, as we’ve come to know and like these characters, and the writers are done wasting time to get to the big jokes and emotional realizations we’ve all been waiting for. In the end, it’s not the lowlights of those “crazy nights” of our life that we remember, and “The Night Before” has enough highlights to make it a fitting final holiday bash. 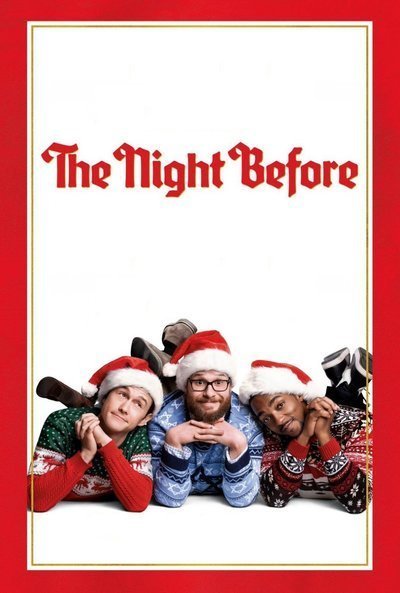 Rated R for drug use and language throughout, some strong sexual content and graphic nudity.