This movie opens with a montage featuring a selection of African-Americans getting ready to leave their homes for the day. Radio and television audio feeds on the soundtrack place the time as Election Day, 2012. One hears President Obama's voice, and Mitt Romney's. The ordinary images connote "ordinary people" while the urgently edited soundbites say "extraordinary times," maybe. As a few interviewees soon make clear, it's also the place that's important: Maryland. It was in this state, one-third of whose residents are African-American, that a state referendum on same-sex marriage was proposed and, on that election day, passed.

The movie continues, showing pamphleteers outside polling places handing out what they call "information on traditional marriage." Directed by Yoruba Richen (who also made "Promised Land," a film about property issues in post-apartheid South Africa, in 2010), "The New Black" is an informative, measured, and never-not-engaging documentary about the emergence of LGBT consciousness in African-American communities across the U.S., and particularly communities with a strong church presence. Noting that African-American religious leaders had a prominent part in the passage of the notorious gay-marriage-banning Proposition 8 in 2008, it chronicles activism while examining age-old attitudes.

As the title of the movie suggests, a lot of the thinking here hinges on the dovetail of gay rights being a continuation of the African-American civil rights struggles of the 20th century. One activist notes "this struggle is in its revolutionary phase, frightening for some," and insists that it's part of "the unfinished business of black people being free."

A little later on, a former fundamentalist minister talks about the social-issue (if you will) component of Black churches: "We preach against smoking, drinking, drugging, even movies." This by was of a preface to how it looks at homosexuality: "We think it's is a white man's disease, that got on us." It's possibly instructive that this movie is seeing its first theatrical run on the week that an openly gay African-American college football player is testing NFL waters: it's demonstrative of the attitudes of some of the other institutions this movement is trying to shake up.

This movie was clearly made with a great deal of love. It's arguable that it was made with too much love, as if there ever could be any such thing. Or maybe "love" is not the right word, and "civility" is. My point, alas, is that as a movie, "The New Black" never really catches fire: as I said above, it's very engaging, but it never gets to urgently compelling. Things do pick up when Richen takes up the story of the young new-gospel singer who once went by the name of Tonex, whose coming-out was a galvanic moment for the community. One does feel churlish for taking a text to task on account that it's conscientiously nice, but Richen's even-handedness, while commendable from a community activist point of view—the point is to build bridges, I presume—does her movie few favors. That said, if you're looking for insight, context, poignancy, the movie does offer all of the above. 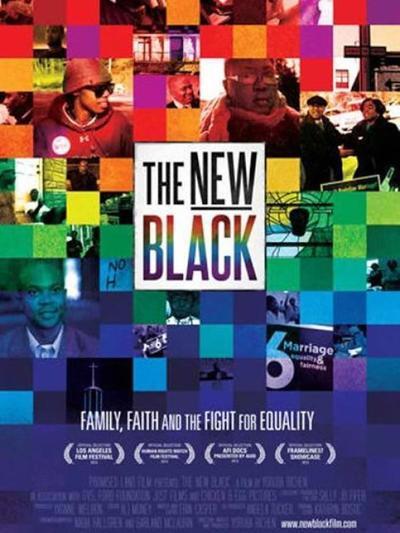