In Rick Alverson's "Entertainment," Gregg Turkington plays a standup comedian traveling through the Mojave Desert, doing his bizarre act in small nightclubs. His cousin John (John C. Reilly) attends one of the shows, and in their awkward conversation afterwards, John suggests that if he wants to attract bigger crowds and get a better reaction, then the act should be changed to "appeal to all four quadrants." I thought of this interaction when I watched Alverson's new film, "The Mountain." In what is by far his most "accessible" film, Alverson maintains his rigorous disinterest in mass appeal and even, at times, comprehensibility. "The Mountain," with its long stretches of quiet, bleak subject matter, and Alverson's staunch refusal to let us in, or fill in the blanks, creates a genuinely unnerving mood.

Taking place in the 1950s, in America's bleached-out autumnal heartland, "The Mountain" appears to be loosely based on the life of Walter Jackson Freeman II, a "physician" who specialized in lobotomies. Freeman developed the transorbital lobotomy, where the "doctor" inserted an ice pick through the patient's eye socket. It was a much easier procedure than cracking open the skull, and it worked for Freeman since he had no surgical training. Freeman traveled the United States, visiting mental institutions, performing lobotomies on an assembly line, documenting it all with photographs. The majority of his patients were women and/or gay people and—in one case—a four-year-old child. Eventually his services were no longer needed, as lobotomies were phased out, replaced by more humane treatment with drugs and psychotherapy. Alverson's almost glacial approach to this terrible subject is undeniably provocative, and galvanized by Jeff Goldblum's truly creepy mad-scientist performance as Dr. Wallace Fiennes.

This is young Tye Sheridan's second collaboration with Alverson, and he is also listed as an Executive Producer. Here he plays Andy, a young man who works at an ice rink where his father—a forbidding German former figure skater (Udo Kier)—trains young girls. Andy is a silent presence, slouching on the edge of the rink, watching the girls in their grey skirts twirl and jump. He wanders through the bowels of the building, smoking, staring into space. His heavy woolen jacket, baggy trousers, boots, all emanate a kind of working-class 1950s aesthetic, no color brighter than a dull green. (Elizabeth Warn's work as costume designer is brilliant throughout.) Sheridan has barely 20 lines through the whole film. Andy is a teenager, but he is weighed down by anxiety, tormented by the absence of his mother. Long ago, she was put into an institution and Andy never learned her fate. After Andy's father dies, Dr. Wallace Fiennes —who treated Andy's mother for an unnamed illness—steps into the scene, inviting Andy to come along with him on one of his trips: he needs a photographer. Andy has ulterior motives for going along. He hopes to find out what happened to his mother. Turns out, the answer might be more than he can handle.

The road trip that follows is filled with a quiet menace difficult to describe, but Alverson's control over the images is total. The scenes operate almost like tableaux, people frozen in space, in time, but frozen in anguished mental states, similar to the photos Andy takes of Fiennes' patients, before and after the "procedure." People are traumatized beyond language, and Alverson—along with cinematographer Lorenzo Hagerman, who also shot "Entertainment"—captures frozen trauma in the silences, colors, vistas. Nothing is welcoming, there's no "give" anywhere.

America looks emptied out of people. Even the motels Andy and Wallace hole up in seem to have no other occupants, and the silence buzzes down the empty dark hallways. This is a movie dominated by long hallways, hallways where people wait passively, all fight drained out of them. Moving from one isolated institution to the next, Fiennes' car drives along lonely roads, bordered by ranks of trees, highlighting the fact that the people in these institutions have been removed from society. Anything can be done to them and nobody would know. Fiennes truly believes he is helping his patients, but this belief manifests in a God complex. Goldblum taps into something truly terrifying here. He doesn't beg for sympathy for his character. There's a zealous gleam in his eye, but he's also a world-class manipulator, able to justify the most monstrous behavior.

People come and go in this world, like automatons. And if they're not automatons, they're on their way to being so. This is not a comforting view of America. Lobotomies were supposed to help suffering people, but of course they were used indiscriminately on people who didn't "fit in" to what was supposed to be mainstream American life, particularly oppressive in the conformist Eisenhower era. The 1950s in "The Mountain" is not just conformist, but frozen, atomized, dead. Warmth doesn't even seem to be a possibility. When Jack (Denis Lavant) enters the scene late in the game, his volatility and expressiveness seem to come not just from France but from another planet. He asks Dr. Fiennes to perform the procedure on his daughter Susan (Hannah Gross). Andy and Susan forge a fragile connection, but there doesn't seem to be any way for it to survive, not in this icy atmosphere. Susan is frighteningly passive. "The Mountain" doesn't seem built to contain Denis Lavant, and the ending comes down like an all-too-obvious hammer.

Production designer Jacqueline Abrahams creates interiors completely lacking in warmth and personalization. Composer Dan Lopatin and sound designer Gene Park underscore the action with low whining moans, persistent buzzes like an eternal headache, and reverberating echoes. In one scene, Andy slumps in a corner, watching Perry Como sing "Home on the Range" on the "Ed Sullivan Show," and the feeling of alienation is so total it's as if Andy was an astronaut, circling the earth, far away from anything connected to anything else.

In films like "New Jerusalem," "The Comedy," "Entertainment" and now "The Mountain," Alverson is aggressively un-commercial in his approach. His work is confrontational and polarizing. I appreciate his refusal to make a film that "appeals to all four quadrants." 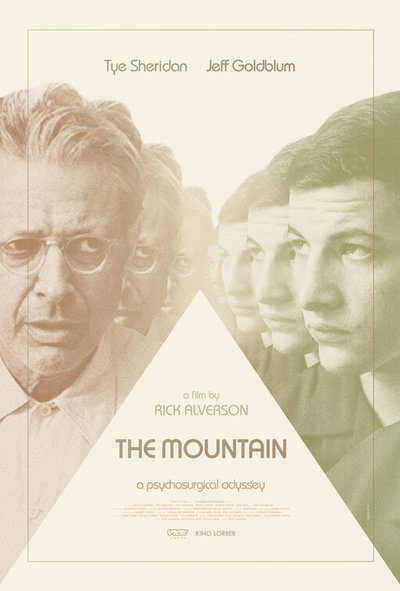