“What do you get when you cross Sir Elton John with a saber-toothed tiger? I don’t know, but you better keep it away from your ass!” This is not exactly a joke, but it’s delivered as one by The Comedian, the struggling stand-up comic at the heart of Rick Alverson’s ironically named feature “Entertainment.” And the line gets the faintest hint of a laugh—possibly because he’s delivering it to a literally captive audience in a prison cafeteria, where the men in orange jumpsuits may be primed to chuckle at anything that deflates the tension around forced anal intercourse. It’s one of the few moments in “Entertainment” where The Comedian’s awkward, confrontational one-liners actually amuse someone. Mostly, his onscreen audiences seem uncomfortable, embarrassed, and trending toward hostile, and the film’s viewers are primed to follow suit. Pushing the envelope of awkwardness to provoke an emotional reaction is unquestionably part of the point. But that commitment to terrible humor is one of the few unquestionable things about “Entertainment,” which is openly designed to provoke unease and uncertainty.

The Comedian is played by real-life comedian Gregg Turkington, and he’s essentially Turkington’s longtime alter-ego Neil Hamburger, right down to the owlish oversized glasses, ghastly comb-over, and habit of clutching three or four cocktails under one arm as he performs. “Entertainment” is a slice of life featuring him out on tour in the California wasteland around the Mojave Desert, hitting a series of mostly empty small-town bars and less reputable venues. The other half of the act is a clown named Eddie ("Mud" and "Joe" co-star Tye Sheridan) whose set largely consists of jumping around wearing a daffy grin, or simulating masturbation and defecation into his hat. They’re an awkward pair, but at least Eddie seems like he’s consciously putting on an act as brightly fake as the greasepaint he slathers onto his face. The Comedian is just as dour, awkward, and bitter offstage as he is onstage.

“Entertainment” feels like a low-budget David Lynch film, full of surreal interludes and oppressive silences. The script, written by Alverson, Turkington, and “Tim and Eric Awesome Show, Great Job!”’s Tim Heidecker (who starred in Alverson’s last feature, “The Comedy”), consists of splintered moments that don’t link together, except symbolically: The Comedian drifts through daytime tours of an airline graveyard and a sun-baked Old West movie set. He witnesses a bloody birth in a women’s bathroom. He spends time with a farmer cousin (John C. Reilly), confronts a desperate hustler (Michael Cera), and gets shut into a light booth by a chromatherapist (Lotte Verbeek) Stripped to his boxers, he’s dragged into an eerie nighttime game of Marco Polo with a group of drunken strangers seemingly ported in from “Wild at Heart.” There’s no sense of linear time in his world, just an overriding sense of dissociation, displacement, and frustration.

And inevitably, he vents that frustration onstage. His awful gags (“Why don’t rapists eat at T.G.I. Friday’s? Well, it’s hard to go out and rape when you have a stomachache!”) are meant to be startling and off-putting, but his invective when his audience doesn’t laugh—or worse, talks back—crosses the line into grotesquerie. Turkington’s whining, stammering delivery as Hamburger is designed to keep pushing audiences away: He draws out words until they turn into aural sandpaper. He repeats himself, stammers, or injects pauses so long that a faster-moving comic might be able to wedge a few bits in during the dead air. He’s excruciating. But The Comedian also seems authentically outraged at all the ingrates who don’t find him hilarious.

Or does he? That’s the open question of a project this steeped in audience provocation. Turkington-as-Hamburger has been a known quantity for decades in terms of awkward, artificial discomfort comedy, and Heidecker projects like “Tim and Eric” and “Check It Out! With Dr. Steve Brule” (starring Reilly) go to the same well of comedy so consciously disjointed and confrontational that it’s meant to startle viewers back around into hilarity. It’s hard to take anything The Comedian does entirely seriously, even when he’s leaving weary, plaintive phone messages for a daughter who may not exist. His messages into the ether recall Dale Cooper endlessly talking into a tape recorder on “Twin Peaks,” just as “Entertainment”’s soundtrack, heavy on crooning, cooing dream-pop, recalls Lynch’s work with Julee Cruise. But above all, “Entertainment” evokes Lynch by keeping the audience off-base, never entirely sure what’s real.

Lynch isn’t Alverson’s only touchstone; “Entertainment” also recalls Quentin Dupieux’s films “Rubber” and “Wrong,” not just for the surreal, straight-faced confrontational comedy, but for the exquisitely shot sense of setting. “Entertainment's" place in time and in the comedy world is unclear, but DP Lorenzo Hagerman gives its arid desert locales and grimy venues a sense of solidity that helps ground the story’s aimlessness. The Comedian is an ugly man with an ugly soul, and an ugly sense of comedy that at one point literally includes making fart noises for 90 full seconds as he pretends to gun down his silent audience with a soccer trophy. But he’s occupying a world that at times is strikingly beautiful. No wonder he resents it so much. 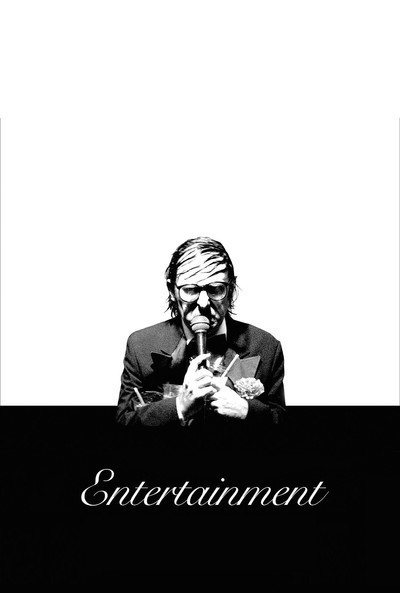 Gregg Turkington as The Comedian

Tye Sheridan as Eddie The Mime

Lotte Verbeek as The Chromotherapist

Tim Heidecker as The Celebrity