Reminiscent of “Scary Stories to Tell in the Dark” but with more R-rated gore, “The Mortuary Collection” is an impressively nasty horror anthology. Spanning a variety of subgenres, from creature feature to body horror to the undead, the movie veers from predictable narrative beats more than once, cackling with menacing glee all the while. And that cackle is literal—the film’s frame story centers the delightfully threatening Clancy Brown, whose instantly recognizable voice adds another layer of menace. Thoroughly grisly and mostly entertaining, “The Mortuary Collection” is a satisfying choice for the spooky season.

Filmmaker Ryan Spindell, who has built his horror bona fides over a number of shorts—including some contributions to Sam Raimi’s “50 States of Fright” series for Quibi—applies that same format to “The Mortuary Collection,” which gets a little meta with its insistence that stories are the most important thing. “What is life but a story? A single narrative thread in the tapestry that binds us all,” says mortician Montgomery Dark (Brown), a feared figure in the small town of Raven’s End. With its desolate forests, seaside cliffs, rickety wooden bridges, and perpetual fog, Raven’s End looks like a menagerie of every classic horror-film location, and Montgomery Dark, a self-described “indentured servant to the great beyond,” is the wrinkly, skeletal, foreboding figure straight out of all your childhood nightmares.

The funeral home he runs, an old Victorian with blood-red accents, sits lonely atop a hill overlooking the town. Whatever ends up on the front porch—baseballs, scarves, a camera—is abandoned by its original owner and collected by Montgomery for a trunk of accoutrement in the funeral home’s foyer. Inside, the place is a shadowy morass of green, blue, and grey, unsettling shades that bring out the ghastly pallor of Montgomery’s skin. At the pulpit where Montgomery leads services, though, the man seems to come to life, invigorated with fervor. “We cannot die!” he roars, which is a weird proclamation to make while overseeing a funeral for a young boy. And that’s not the only strange component of the evening: Montgomery also receives a job application from a young woman, Sam (Caitlin Custer), who is responding to the Help Wanted sign out front.

Sam is curious about the responsibilities of Montgomery’s position, and even more so when he explains that he not only keeps an archive of how people died, but why. When Sam learns about Montgomery’s collection of death tales, she demands he tell one—“something dark and twisted; something awesome”—and then “The Mortuary Collection” shifts into anthology mode. With each story Montgomery tells, he attempts to one-up himself into scaring the blandly unfazed Sam. An attractive woman making her way through a party, flirting with male attendees and picking their pockets, until a brush with something strange in a bathroom. A fraternity member who seduces freshmen women with faux-affirmative statements about sexual freedom experiences his own bizarre one-night stand. A husband unhappy in his marriage wonders what would happen if he broke the vow “until death do us part.” And in the final segment, which references Spindell’s previous short “The Babysitter Murders,” a breakout at a local asylum puts its neighbors in danger.

The stories-within-the-story start off a little cheesy, but as Montgomery—or, as Sam somewhat derisively calls him, Monty—ups the ante to scare his potential new hire, “The Mortuary Collection” dives fully into the macabre, creepy, and inexplicable. Spindell sticks with a retro aesthetic that relies on costume and production design details to signify the stories’ shifting time periods (reflecting the many decades that Montgomery has run the funeral home), and the familiarity of prim cocktail dresses, fraternity pennants, and gold wedding rings become grotesque when covered in goopy slime or drenched in blood. There is some bona fide gross-out stuff that will delight shlock fans, including exploding genitalia and a crushed-in skull providing a glimpse of mushy brain matter, and that makes a nice contrast to the film’s impressionistic renderings of ghosts and stop-motion style of zombies. Also quite impressive is the film’s sound design, which amps up the funeral’s creaking doors and floors, the steady rumble of a thunderstorm, the gurgle of spreading blood, and the whooshing broken-vacuum sound of a tooth being pulled out. The spooky atmosphere sometimes comes off a little childish, but its unrelenting quality is ultimately unnerving.

“The Mortuary Collection” does meander a bit too long, in particular whenever it reveals a narrative misdirection too early; the middle two stories in the anthology, both of which focus on self-absorbed men who end up hurting women, could have been brisker in their execution. And although Brown is a solid anchor (and one of the film’s sole sources of dialogue-driven humor, with his bemused reactions to the unimpressed Sam), he almost feels underused. Still, “The Mortuary Collection” is an enjoyably gruesome diversion that wonders whether there really is a “universal balance of all things,” as Montgomery says, and answers its own query with an array of horror stories that take us through the history of the genre, and points to where it might go. 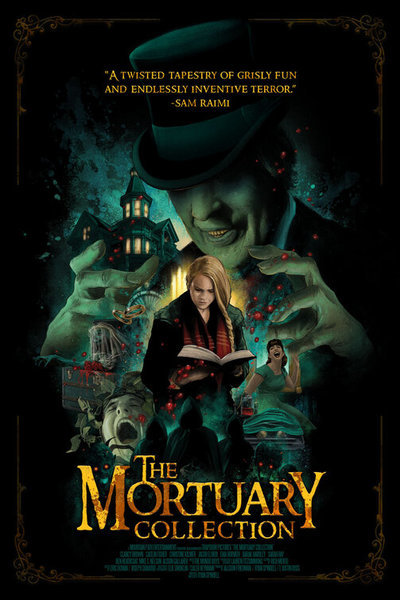