Remember when Pierce Brosnan used to make fun globetrotting movies like his turn as 007 and in the underrated remake of “The Thomas Crown Affair”? The charming actor clearly relished the chance to revisit that skill set in Renny Harlin’s “The Misfits,” a “Fast and Furious” riff about a makeshift family of criminals who need Brosnan’s expert lawbreaker to help them pull off the biggest heist of their careers. Sadly, no one involved has any idea what to do with Brosnan, burying his playful performance in a film that’s almost impressively soulless. This is hollow nonsense, a film designed purely to make money in international markets that has so little actual plot that it’s insulting. The characters are bland, the dialogue is atrocious, the action is mediocre, and even the heist is a boring bust.

Pierce Brosnan is the guy trying to have a good time at the worst party he’s ever been to as he plays Richard Pace, a world-renowned criminal still pulling some small jobs but who seems to be past his thieving prime. That’s when he’s approached by The Misfits, a group of criminals who consider themselves modern day Robin Hoods. They want Pace to help them steal millions of gold bars that are reportedly being held under a maximum-security prison, but they’re not in it for the money. You see, the gold is used to fund terrorism, so they’re trying to cut off the cashflow of evil and send the profits to international charities. How noble.

The Misfits are led by Ringo (Nick Cannon), a bank robber, and Violet (Jamie Chung), a martial arts expert who loves kicking ass. They also include someone named Prince (Rami Jaber), no relation to the mega-talented musician, and Wick (Mike Angelo), but the real reason Pace gets involved is that the newest Misfit happens to be his daughter Hope (Hermione Corfield). There’s another carrot on the stick for Pace in the form of Warner Schultz (Tim Roth), the Moriarty to Pace’s Sherlock, and the guy who happens to run the prison that houses all that terrorism-funding gold.

Harlin used to be an incredibly reliable action director, helming hits like “Die Hard 2: Die Harder,” “Cliffhanger,” and “Deep Blue Sea,” but “The Misfits” shows none of that skill. The incredibly small number of actual action scenes are incompetently conceived and executed—the climax of the film is a dull chase across a desert wherein the predator and prey almost never share a frame, just shots of people screaming in cars as sand flies around them. It’s stunningly incompetent.

And the script isn’t any better. The caliber of dialogue here is best summarized in “I don’t date men ... I kill them” and the whole production uses its main setting of Abu Dhabi in ways that feel slightly racist, particularly in some silly accent work by Cannon, who looks so uncomfortable here that I half-expected him to start promoting “The Masked Singer.”

Only Brosnan appears like he gave a damn, finding that charisma and screen presence that made him an international star when he took on the role of Bond. However, anyone hoping that this wannabe franchise-starter could be an action comeback for the former 007 should reconsider. After all, a second film in this series may lead a real-life group like the Misfits to plan a heist to try and steal its funding. It would be for the greater good.

In theaters today, June 11th, and on digital and On Demand on Tuesday, June 15th. 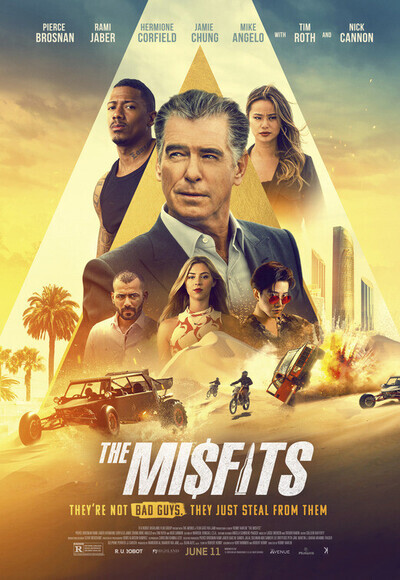 Rami Jaber as The Prince