Ever get the sinking feeling when someone you meet comes across as unnatural? Something about their personality and behavior just seems ... off? There’s nothing obviously wrong about them, of course. All of your suspicions are about innocuous details, but it’s enough to make you want to avoid them. In Thomas F. Mazziotti’s “The Mimic,” those suspicions are the impetus for a man known as “the Narrator” (Thomas Sadoski) to launch a full investigation into the new neighbor next door who he dubs “the Kid” (Jake Robinson). Threatened by the Kid’s intrusion into his world, including a small community newspaper, he suspects him of being a sociopath, which throws them both into a series of ridiculous events. Things get further complicated when the widowed Narrator starts to have feelings for the Kid’s (mostly unseen throughout the film) wife.

Mazziotti, who wrote and directed “The Mimic,” bases the movie on true events, but it’s hard to find any kernel of truth beyond the idea of making friends with a sociopath. In spending the runtime with both characters, it’s clear that the two are unpleasant to be around. Maybe they’re both sociopaths? Sadoski’s Narrator is a smug know-it-all who calls women who drink rosé “sluts” and brags to the Kid about telling his wife that she could do better than her husband. Conversely, Robinson plays his character with a kind of wide-eyed stare that’s meant to feel both devious and playfully innocent. He’s essentially played like a blank slate, clueless about many aspects of the world around him. He is the racketball wall against which the Narrator lobs his quips in an attempt for a semi-screwball comedy rapport. While ambitious, it doesn’t quite work. The zingers don’t always sting; the punchlines are for a one-note “hah” at a comedy club that sounds like “I get what you’re going for, but it’s not enough for a polite laugh.” Many of the lines of dialogue follow the “I know you are but what am I?” logic, as the Kid “mimics” the Narrator’s combative arguments with his own. These get less rewarding as the verbal sparring matches continue until there’s a breakthrough.

In addition to playing the most unconvincing journalist ever portrayed in a movie, the Narrator is, of course, a screenwriter himself. It’s another in a series of unfunny bits. Along with the uninspired jokes and the occasional sexist line, Mazziotti’s screenplay makes sure to define and then incorporate the movie “Gaslight” into plot as well as carry on an ongoing pun play with a can of Febreze and the words “scents” and “sense.” In one of the more baffling choices, "The Mimic" departs from our main characters for a meta joke between a young writer and an older director. Perhaps this was a stand-in for the inner turmoil Mazziotti faced wearing both hats, but the argument about whether or not to give the Narrator another love interest and the power struggle between the two is less interesting than I’m making it sound. It steals away energy from a movie that was already struggling to hit its stride. There are a number of famous faces and names in the supporting cast, including M. Emmet Walsh, Jessica Walter, Austin Pendleton, and Gina Gershon, but they barely stay long enough onscreen to add some life to the movie.

To put it bluntly, “The Mimic” is an inelegant comedy. Bits are strewn about the plot that don’t always seem to connect with each other or with reason. It’s a comedy in name only, with ridiculous, unexplained and contrived situations leading the charge. The moral of the story seems to be that it’s not the life-threatening journey that counts, but the sociopathic friends we made along the way. And the imbalanced performances from Sadoski and Robinson never quite come together into a dynamic that’s fun to watch. It’s the uncomfortable feeling of watching an argument in public.

Now available in select theaters and on VOD. 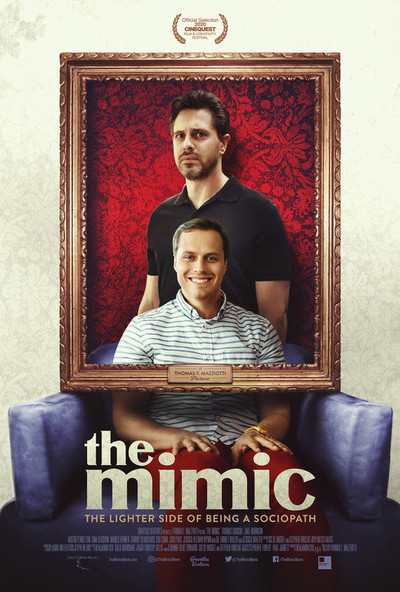 Thomas Sadoski as The Narrator

Jake Robinson as The Kid