The Man Who Knew Infinity

We do love our male geniuses these days. Even more so, apparently, if their presence ever graced the hallowed halls of Cambridge at some point. And if they faced a major hurdle in life, such as a debilitating disease, closeted homosexuality or control freak issues? That only humanizes the bright fellow all the more. Of course, behind every great man must be a self-sacrificing woman who stands by their side or, otherwise, there would be no emotional pull to balance all that complex geek-speak chatter. No matter that the lives of many of these ladies often would provide enough material for a potentially fascinating film all on their own.

That was certainly the case with 2014’s “The Theory of Everything,” with Eddie Redmayne in his Oscar-winning role as astrophysicist Stephen Hawking, and “The Imitation Game” that same year, featuring Benedict Cumberbatch’s Oscar-nominated performance as World War II code breaker Alan Turing. And, although he was primarily a product of Silicon Valley, add 2015’s “Steve Jobs” starring the Oscar-nominated Michael Fassbender to the list.

Now arrives “The Man Who Knew Infinity,” which on the surface looks like a potentially rich variation on this smarty-pants fact-based genre. The innovator this time is Srinivasa Ramanujan, a self-taught Indian mathematician whose contributions to the field were considered massive enough to have inspired a Google doodle on the 125th anniversary of his birth in 2012. We are told early on that he is “the most romantic figure in the recent history of mathematics,” which is quite a billing to live up to.

The details of Ramanujan’s backstory certainly have cinematic potential, including East vs. West conflicts. There’s a soap-operatic arranged marriage to a pretty wife he barely knew and a possessive mother. He was a devoted practitioner of his Hindu faith and viewed his intuitive knowledge as a God-bestowed gift. And he professed a desperate desire to allow his uncanny ability for doing seemingly impossible calculations in his head to get its full due by sailing 6,000 miles to Trinity College in Cambridge, where the very tree that held the apple that fell on Sir Isaac Newton’s head stands in the grassy courtyard.

But while “The Theory of Everything” relied on clever visuals to emblemize Hawking’s innovative thinking and “The Imitation Game” had that giant proto-computer clicking away to stand in for Turing’s ingenuity, there is little more than few scribbled equations and notebooks to convey what Ramanujan presented to the world, before dying from TB at age 32. Yes, something called partition function is explained at length. But why it matters so much and what it means in a practical sense, I could not say.

What purports to be a celebration of the power of numbers should by all rights be the opposite of math-phobic. However, the filmmakers behind “The Man Who Knew Infinity” didn’t want to make their movie feel like homework. But an account of a remarkable person should strive to be as equally remarkable as its subject, not the timid and tidy boilerplate special of a biopic that “The Man Who Knew Infinity” too often resembles.

What we are left with is a narrative that is primarily driven by its central odd-couple relationship, amid cultural clashes and bigotry. The story begins just as World War I looms as an impoverished Ramanujan (Dev Patel) works as a lowly clerk in an accounting house in his homeland. He decides to write a letter to the formidable Cambridge mathematician G.H. Hardy (Jeremy Irons, exuding his usual upper-class whiff of superiority but in academic form), asking to be allowed to further his pursuits at the school. Initially, a skeptical Hardy thinks the missive is a joke, even if he is tempted by the examples of the formulas inside. But his far-cuddlier colleague John Littlewood (Toby Jones) urges him to take a chance and beckon Ramanujan abroad.

At least those in charge of casting knew what they were doing when they paired Irons and Patel. Rather than the youthful unease of Patel’s “Slumdog Millionaire” breakthrough, Ramanujan requires a sense of obsessive urgency and unwavering self-confidence about his destiny. The actor captures these traits perfectly without resorting to off-putting bravado or compromising his abundant natural appeal, from his character’s purposeful stride to his insistent declarations of his belief in himself.

Meanwhile, Irons is the gawky one. His Hardy is a socially inept bachelor who is ill-suited to the role of nurturing mentor and father figure. But somehow both men learn to rise above any differences, eventually striking a mathematical balance between Ramanujan’s spontaneous intuitive approach and Hardy’s insistence on rigorous discipline and supportive proof. That helps to bolster their defense against the objections of the narrow-minded Cambridge establishment—some of whom derisively refer to Hardy’s protégé as “Gunga Din”—into accepting this outsider genius into their fold.

Eventually, war breaks out (the low-budget film somehow manages a shot of a hovering zeppelin) and a military hospital is set up on campus. Ramanujan neglects his health (he has a hard time maintaining his vegetarian diet during food rationing) while his lonely wife Janaki (Devika Bhise) pines away in India and his mother “forgets” to mail her countless letters requesting to visit him.

Naturally, a final-act triumph of sorts is all but assured. And, thanks in large part to Irons and Patel, audiences will be moved. But even they can’t hide the fact that “The Man Who Knew Infinity” is missing some essential elements in its true-story equation. Sometimes, engaging the brain can be as equally essential as touching the heart. 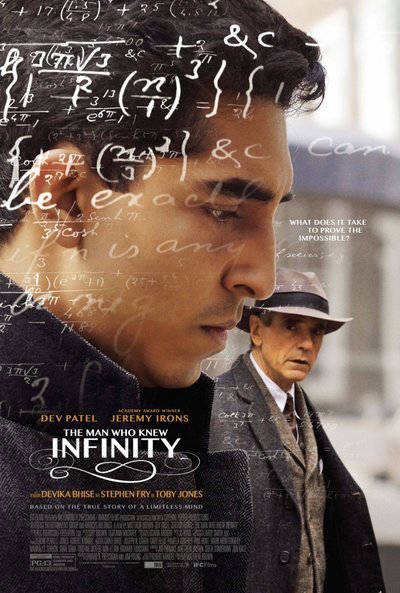 Rated PG-13 for some thematic elements and smoking.