Waves crash, birds scream, and rain pounds. Robert Eggers’ “The Lighthouse” wants to drive you a little mad. It’s not just a film about two people on the edge of sanity, it uses sound design and filmmaking tools to push you there too. It has the feel of watching someone else’s nightmare, and it’s not one that’s going to end well. While it’s ultimately a bit too self-conscious to provoke the existential dread and true terror of the best films like it, it’s still an impressive accomplishment thanks to Eggers’ fearlessness and a pair of completely committed performances.

Life is bleak for Thomas and Ephraim from the first gloomy frame of “The Lighthouse.” And I mean gloomy. This is a movie that will be listed as “black and white” but would more accurately be called “gray.” There are few distinct blacks or whites in a film that looks like an overcast evening even during the day. It opens with the two men, played by Willem Dafoe and Robert Pattinson, arriving to work a shift at a lighthouse on the edge of the world. Thomas, played by Dafoe, is the older one and the boss of the operation. He orders around Pattinson’s Ephraim, making sure he takes care of all of the daily duties like cleaning and repairing but always reminding him who’s in charge. Thomas refers to Ephraim in diminutive terms like “lad” and orders him around when he’s not telling a long-winded story, or farting.

Ephraim toils and troubles all day, develops a rivalry with a seagull, and is forced to listen to Thomas’ tall tales over dinner before his boss heads up to the light that Ephraim has been denied. Not only does he start to become obsessed with what exactly happens at the top of the lighthouse, but he has increasingly terrifying visions between bouts of self-gratification and back-breaking labor. A film that is already in experimental territory from its opening scene gets more and more surreal, allowing us to question which one of these guys will go crazy first and what the repercussions will be. “The Lighthouse” takes on the tenor of a slow-motion car crash, from which you know there will be no survivors. This is not a buddy movie, but one that reminds us that nothing may be scarier than being stuck with someone you can’t stand.

Dafoe does what sometimes feels like a salty dog caricature—if they ever do a live-action “Simpsons” movie, he’s the man for the Sea Captain—but it’s a captivating performance. As the old-timer of the two, Dafoe’s Thomas gets to remain tantalizingly vague for a while in that we’re not sure if he’s just a jerk or someone actively trying to destroy the person making him beans. He's hysterical and annoying in equal measure.

And Pattinson is even better. In a long line of daring performances recently (“The Lost City of Z,” “High Life”), this may be his best work. He imbues Ephraim with desperation, the reasons for which are revealed later, that makes his plight more tragic. He doesn’t just need to survive, he needs this job to climb out of the hole of life. He needs the light. He needs success. Pattinson throws himself entirely into the role and it’s fun to watch.

Pattinson, Dafoe, and an angry seagull may be the stars of “The Lighthouse” but this is a film that’s constantly calling attention to the choices of its director and creative team. From the decision to shoot it in gray 4:3 ratio to heighten the claustrophobia to the non-stop cacophony of noise—it feels like if they don’t kill each other, the waves or storm will—“The Lighthouse” is a sensory assault. It’s an easy film to admire with both in its ambition and execution, but there’s a creeping sense that it doesn’t really add up to much more than a bit of a self-aware poke in the eye, and the film doesn't quite stick the landing to make that feeling go away. Sure, that kind of experimental provocation is fun in its own twisted way, but it feels like a missed opportunity to be more than just "fun." With its incredible level of detail, “The Witch” transported us back to its era and made its horror tangible. There’s nothing tangible here. If you try to put your hands on “The Lighthouse,” it slips through your fingers.

Although maybe that’s the point. Maybe this is just Eggers’ existential version of a salty dog tale told on the high seas—the urban legend of a couple of guys stuck on a lighthouse who drove each other insane. Anyone searching for more than that does so at their own peril. Be careful not to crash on the rocks.

This review was filed from the Toronto International Film Festival on September 6th. 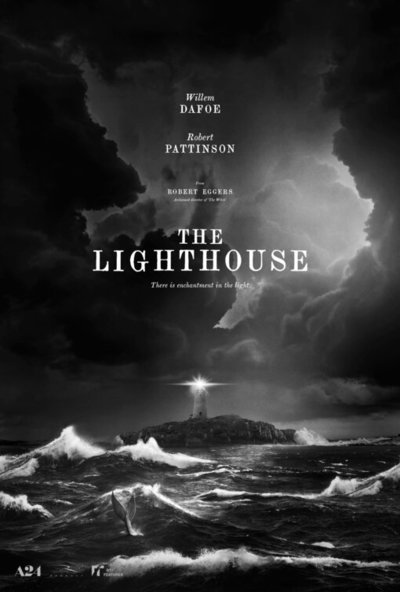