The Light of the Moon

"How much did you have to drink?"

A rape victim has a couple of equally unattractive choices when faced with that question. She can lie, and thus participate in the sickness of a culture which deems a rape victim somehow responsible for the rape if she's been drinking. Or she can tell the truth, and wait for the inevitable character assassination. Shame spiral to follow: If only I hadn't gotten drunk that night ... if only I hadn't danced with that guy ... if only I hadn't walked home alone ... What comes after the rape is almost worse than the rape itself. Jessica Thompson's film "The Light of the Moon" (her first as writer and director) is a nuanced and sensitive exploration of the many ways rape affects a person's life, even as she tries like hell to get back to normal.

Bonnie (Stephanie Beatriz) and her boyfriend Matt (Michael Stahl-David) live in the Bushwick area of Brooklyn. They both have demanding careers, and the first scene of the film shows Matt begging off from a night out with Bonnie and her co-workers. (This opening scene is pretty rough around the edges. There's a lot of dead air, and Bonnie and Matt's relationship appears to be made up of rolling their eyes at each other in generalized sarcastic attitudes. I felt my heart sink. But stick it out through the first scene. The film finds it footing soon after.) Then follows a montage of Bonnie having a blast with her friends, pounding down shots and dancing at a club. On the three-block walk home to her apartment, a guy drags her into an alley and rapes her. Bonnie staggers home, face bloody, and thinks twice before getting in the shower. She puts her underwear and the piece of Kleenex she used to wipe between her legs in a plastic bag, actions that tell us she has decided to report it.

The "processing" of a rape victim is shown step by humiliating step, as Bonnie—with her upset boyfriend sitting beside her—answers the questions asked by the detective, the nurse, and the social worker. She answers truthfully, even though she knows she will be judged. She was wasted. She also did some cocaine. There was a guy who kept wanting to dance with her. No, she didn't get a good look at her attacker. "Were you wearing your headphones?" asks her boyfriend at one point. She winces at the implied judgment. She goes back to work a couple of days later—against Matt's advice—and tells everyone she was mugged. The only person who knows she was raped is Matt.

"The Light of the Moon" is refreshingly honest in its acknowledgment of the impact rape has on a couple, not just in the bedroom, but in all aspects of their lives. Matt doesn't know what to do to help. She knows he's trying but it just serves as a reminder of what happened to her. Suddenly he doesn't want her working late? Suddenly he's cooking for her? Where was all this caring before she was raped? There are a couple of truly extraordinary scenes where the couple try to have sex again, and he's afraid of hurting her, and she wants him to do it like he used to do it, and they're both worried the other is thinking about the rape ... These scenes are so honest! The actors are so honest! After the first 5 minutes of the film, where the two actors roll their eyes at each other, what emerges is a believably three-dimensional loving and difficult relationship struggling to exist under the weight of the trauma.

Bonnie resists being labeled as a "victim." She hates the support group. She rails at Matt, "I don't want to join the Sisterhood of Rape Victims." All of these things are completely normal, completely understandable, but they're so rarely explored in film. There's a brief moment in "Elle," when Michèle (Isabelle Huppert) reveals to a table of good friends that she was raped. Suddenly everyone looks at her differently, with concerned and pitying expressions. If she had said, "My car was stolen" or "Someone stole my purse" they might be shocked, but they wouldn't look at her like she was a different person because of it. This is what Bonnie so desperately wants to avoid.

"The Light of the Moon"'s low budget shows in its limited locations (mostly interiors) and its scattershot approach to second-unit "atmospheric" shots of the neighborhood. But Thompson (and her cinematographer Autumn Eakin) have made very careful choices. Sometimes the camera is handheld, sticking close to Bonnie, a jagged representation of her emotional state. Sometimes, when Bonnie tries to dissociate, the sound hollows out, like she's at the bottom of a well. In one scene between Bonnie and Matt, the camera is placed above the bed, and their conversation, intimate and difficult, plays out in just one take. This is a relationship movie, a relationship heightened and threatened by what happened to her. Thompson's script and her visual style give them the space to try to work it out.

Both Bonnie and Matt are three-dimensional characters. Bonnie drinks too much. Matt takes the relationship for granted. Conrad Ricamora plays Jack, Bonnie's co-worker and best friend, who seems in that deadly first scene to be the obligatory "Sassy Gay Friend" but he turns out to be a thoughtful and sensitive presence, a man who watches his friend disintegrate and—like Matt—wants to help, even though she refuses to ask.

Rape has been used as a plot point from the beginning of cinema, but rarely has the aftermath been explored in such a detailed and sensitive way. Matt, devastated, says to her at one point, "This happened to us." The comment goes over as well with Bonnie as you would imagine, but in a lot of ways the line is the key to the whole film. 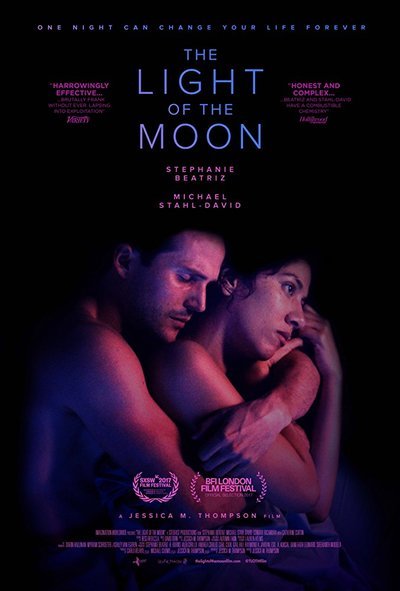