The Light Between Oceans

Great drama requires trust. The director has to trust his actors to convey the complexity of the human experience without smothering their performances in manipulative filmmaking devices. He also has to trust the viewer to bring their own interpretations and emotions to the story, meeting the characters halfway along the spectrum of the human experience. Derek Cianfrance can’t find this trust in “The Light Between Oceans," an adaptation of M.L. Stedman’s novel. It's a film with greatness within that’s been lost due to varying degrees of distrust; ridiculously tight close-ups in soft focus feel like they’re pushing you to cry instead of allowing emotion to come organically. Narrative beats and themes are hit repeatedly, just to make sure you don’t miss an opportunity to feel something. Buried beneath this melodrama—but shining through nearly enough to justify a look—one can see the film that could have been, as anchored by great performances and emotional truth. It’s just lost in the fog.

Tom Sherbourne (Michael Fassbender, giving a very measured, confident performance) is a World War I veteran battling Post-Traumatic Stress Disorder before his condition really had a name. In some of the film’s best scenes, we learn that Tom has been burdened by the randomness of life and death. Why did he live but his fellow soldiers die? One almost gets the sense that Tom doesn’t think he “deserves” to have made it home, and that he’s going to spend the rest of his life in solitude, refusing to take the creature comforts that other young men lost forever when they went to war.

To that end, Tom signs up to take a job that not many would want, manning an extremely remote lighthouse in Australia, at a spot in which one can see two oceans from its top. The last lighthouse keeper was fired when he told someone that he allowed his wife to signal a passing ship. The break in protocol was a small problem—the fact that his wife had been dead a few years was a much bigger one. And yet this not-at-all-coveted job changes Tom’s life when he meets the daughter of his new boss, a headstrong and beautiful young lady named Isabel (Alicia Vikander). Before long, Isabel and Tom are married, planning to start a family on Janus Island. Isabel gets pregnant, but loses the baby in a heartbreaking scene in which Tom is in the lighthouse and she can’t get to him. She gets pregnant again. Tragedy strikes again.

While Isabel and Tom are mourning the loss of their second child, a miracle happens. A rowboat washes ashore, carrying a dead body and a baby. No one on the mainland knows that Isabel lost the second baby. They could just take this new child as their own and no one would know any differently. At first, the plan seems to work perfectly as Isabel, Tom, and their new daughter Lucy find happiness, but a visit to the mainland forces an encounter between Tom and a mysterious woman (Rachel Weisz) that changes everything.

Derek Cianfrance has undeniable skill with actors, drawing masterful performances out of Ryan Gosling and Michelle Williams in “Blue Valentine” and his large ensemble in the highly underrated “The Place Beyond the Pines.” That skill is evident here mostly in Fassbender’s largely internal turn. His take on Tom is often stoic, haunted by the ghosts of World War I in a way that makes him quiet, sometimes uncertain. Vikander often goes in the other direction, offering the more extreme emotions that Tom keeps hidden, but she’s rarely given the room to breathe life into the performance. And I mean that almost literally. Cianfrance and cinematographer Adam Arkapaw put us right in her face in extreme close-up, thinking that this will help force an audience response. It’s distracting more than effective, as is the soft focus and overcooked score by Alexandre Desplat. When Arkapaw and Cianfrance let their characters breathe, or even when they admire the gorgeous landscape, the film feels more effective and less manipulative.

Ultimately, it comes back to trust. Don’t force us to feel, trust that we will do so. This is a film that I kept wanting to emotionally connect with and give myself over to the human power of its tragedy, but it kept pushing me away. With the undeniable, unwavering skill of the trio of actors at the film's center, we would have followed them through this heartbreaking tale without the signposts that tell us what to feel along the way. 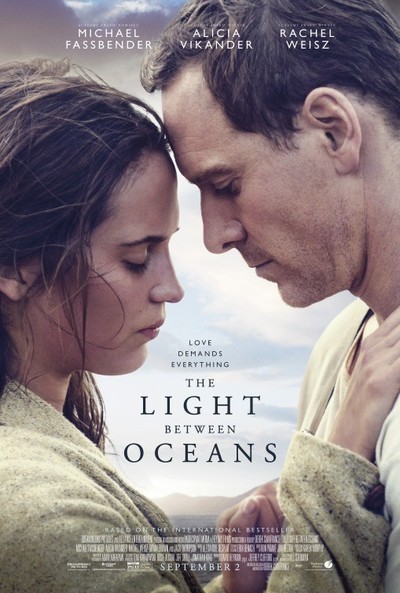 Rated PG-13 for thematic material and some sexual content.