Sofia Villani Scicolone first strolled into the movies via a 1950 beauty pageant. She was 15 years old. Re-named "Sophia Loren" by her husband Carlo Ponti, she got attention immediately, for her beauty, but also for her talent. She was a glamorous woman who played decidedly unglamorous roles, her onscreen personality being earthy, high-tempered, no-nonsense. She came from a very real place, she did not seem like she was manufactured in a Hollywood lab. Loren had to fight to get many of the roles she wanted, roles she knew was right for. She fought to play the mother in Vittorio De Sica's "Two Women" (1960), and her instincts were clearly correct. She was showered with awards for that performance, including the Best Actress Oscar.

Her career at this point has spanned 70 years, putting her in very rarified company. Loren hasn't appeared in anything in over a decade. She remains such a huge star that her appearance in anything is always an event. So, too, with Netflix's "The Life Ahead," directed by her son, Edoardo Ponti. The fear going into the film was that it would not be worthy of her. Thankfully, it is.

Based on Romain Gary's 1975 book The Life Before Us (already adapted once before, in 1977's "Madame Rosa," starring Simone Signoret), "The Life Ahead" is about an elderly Holocaust survivor and ex-prostitute, who takes in the children of local sex workers, either temporarily or permanently. She operates an unofficial juvenile way-station, for children whose mothers have either abandoned them or can't take care of them. In a society that all too often lets people slip through the cracks, Madame Rosa is the glue of her particular neighborhood. As she nears the end of her life, one child under her care helps her through that difficult process. It is an unlikely friendship, to say the least.

Loren inhabits the role of Madame Rosa as if it was written for her. (You can see why Ponti wanted to remake it for her). Bringing to the table her lifetime of experience, talent, and sense of truth, Loren's Madame Rosa is alternately warm and cranky, imperious and funny, strong and fragile. Madame Rosa has led a hard life, and it shows in her face, her actions, but she is still capable of acts of great generosity. Madame Rosa often goes into fugue states when the trauma of her past gets to be too much. She retreats from the everyday world. In those moments, Loren seems truly broken, staring into space, unreachable. When feeling comes up in her, it's so sharp and immediate it seems to surprise even her. This is not a character who "indulges" in her emotions. She has survived by not "indulging.”

Into Madame Rosa's apartment comes Momo, short for Mohamed, and he is played by 14-year-old Ibrahima Gueye. Momo is a Muslim from Senegal, although he has no memory of his home country. His father killed his mother when she refused to prostitute herself anymore. Momo is a tough kid with a hard shell, who makes money selling drugs. Madame Rosa is nobody's fool. She wheedles a local store-owner (played by Babak Karimi, familiar from his work in Asghar Farhadi's "A Separation" and "The Salesman"), to give Momo a job a couple days a week. Madame Rosa's best friend is Lola, a sex worker played by wonderful trans actress Abril Zamora. Lola was, as Momo informs us in voiceover, once a middleweight boxing champion, and so everyone "respected her ... because if they didn't she'd bash their faces." The relationship created by Loren and Zamora is beautiful. You can feel the history between these two women. This small community of people notice Madame Rosa starting to deteriorate. But it is to Momo Madame Rosa turns when she needs it. "You're a little shit," she says to him, "but I know you keep your word."

Young Gueye is one of those children who wouldn't know how to be phony if you paid him. When he wise-cracks, when he gets aggressive, when he bursts into tears out of nowhere ... it all comes from an organic place within him. He looks at Sophia Loren, takes in all she gives him—pain and fear and need—and reflects it back to her. He's wonderful and Loren is wonderful with him.

Loren occupies a similar position as Catherine Deneuve: an icon in her heyday, known for her beauty, her style ... a "movie goddess" who could have been abandoned by an industry that doesn't want to see its movie goddesses grow old. Deneuve continues to work in interesting challenging projects, more so than Loren does. Burt Reynolds was in a similar position. What do we do with sex symbols "past their prime"? Sadly, our culture doesn't make room for what could be an extremely interesting conversation. "The Last Movie Star" paid tribute to Burt Reynolds' career, but also appreciated what he brought to the table as an old man. "The Life Ahead" operates the same way, allowing Loren similar grace and space. Watching her in “The Life Ahead," shuffling through her apartment in a loose kimono, long grey hair flowing behind her, still elegant, still beautiful, but now old and frail, is to allow us the space to contemplate our memories of her in the past, while leaving plenty of room to celebrate who she is now. 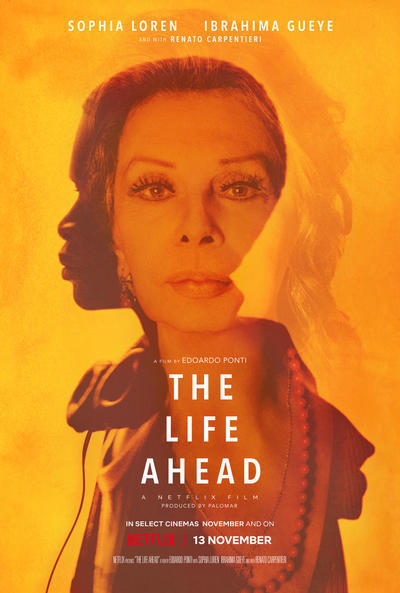