No matter how familiar you may be with the history of the modern gay rights movement or the domestic discontents of America in the Cold War, Josh Howard’s incisive documentary “The Lavender Scare” offers a stirring depiction of gay travails during that era that’s as shocking as it is illuminating.

The shocking aspect comes in the realization of how deep, damaging, and long-lasting the federal government’s persecution (not too strong a word) of homosexuals was. Started in the late ‘40s, it meant that any federal employee even suspected of being gay was dismissed or invited to resign. This was a policy whereby the government actively pursued its victims, delving into people’s private lives and pressuring those victims to name others. Thousands or tens of thousands of gays were eventually run out of government jobs, resulting in destroyed careers, broken lives and quite a number of suicides. And if you think that this persecution must’ve ended in the early ‘60s after the influence of Sen. Joseph McCarthy waned, or in the ‘70s after the Stonewall uprising opened the floodgates of gay activism, think again. Elements of the policy remained in force until Bill Clinton ended them in 1995.

The film’s title of course suggests a parallel with the contemporaneous hysteria over Communist influence in the U.S. But that parallel is only of limited usefulness. In the case of the Red Scare, there was actually something to be scared of: the U.S. was in state of conflict with a monolithic tyranny on the other side of the world that had a very active and sophisticated espionage apparatus aimed at our government, military and other aspects of American society. The Rosenbergs, Alger Hiss and others were not witches (as the term “witch hunt” is meant to imply): they were traitors capable of doing great damage to the U.S.

The Lavender Scare, on the other hand, was based on nothing but fantasy and a falsehood. The falsehood, though, was one that actually sounded kind of logical. The reason that homosexuals needed to be ferreted out and banished from the government, the official line went, was “national security.” The fact that gays indulged in sexual acts that were illegal meant they were susceptible to blackmail and manipulation by those involved in espionage like the Soviets. As I say, it sounds logical, and it was backbone of the campaign against gays in the government and the media for decades. The only problem: There was not a single example of this happening. Not once. Ever.

But if the reality component of the anti-gay campaign was slim to non-existent, the fantasy element was huge and pervasive. During the ‘20s and ‘30s, increasing urbanization and other social changes had resulted in thriving gay subcultures in many big cities, and World War II famously made many men and women in the military realize not only their own orientation but also how widespread their kind was. Yet during these decades, homosexuality was virtually never discussed in public forums or represented in the media.

That changed dramatically in 1948 with the publication of Alfred Kinsey’s study of male sexuality, which found that over a third of American men had at least one homosexual experience. But rather than bringing a calming scientific clarity to the subject, Kinsey’s study coincided with the fraught post-war mood of paranoia that we know from so many film noir and horror movies of the period. As fantasy overwhelmed both science and common sense, gays were seen purely as malevolent stereotypes—sick, immoral, weak-willed, hysterical, duplicitous, un-American and potentially subversive. This kind of caricature and derogation spanned the culture, from the halls of Congress to the toniest publications. It would be well into the ‘70s before major newspapers stopped using “perverts” and “deviates” as synonyms for homosexuals.

“The Lavender Scare” is based on a 2004 book of the same title by historian David K. Johnson, who is interviewed in the film. Exhaustively researched and lucidly written, Johnson’s book presents a detailed chronology of the various congressional hearings, investigations and shifts of policy that the anti-gay campaign entailed, and it makes clarifications that the film’s running time no doubt precluded: for example, that President Eisenhower personally exhibited a lot of tolerance toward gays even though he acceded to political pressure in issuing the 1953 executive order that ordered the firing of all gay men and lesbians from the government; nor was there any special animus or zeal evident on the part of J. Edgar Hoover, though the FBI was involved in investigating gays (Johnson also dismisses as salacious invention the story of Hoover being seen at a New York party dressed in women’s clothes).

Howard’s primary contribution to this history lies in the interviews the film contains, which give us access to some of the individual lives and stories behind the headlines. Naturally, part of the tale is tragic: ample screen time is given to the letters and family of Andrew Ference, a bright young foreign service officer who killed himself in Paris after being identified as gay. Even when death wasn’t the outcome, the personal testimonies Howard gathers provide plenty of evidence of smart, talented and truly patriotic people who could have contributed mightily to the country but for one telltale trait. Yet not all tales are downbeat. There’s one guy who’s confronted with government investigators who bring a photo of him performing in drag. Rather than deny it’s him, the guy offers to supply them with a better photo. Defended by his boss, he ends up keeping his job in the postal service.

The happiest of the anti-gay campaign’s unintended consequences was the stimulus it provided to the creation and propagation of a gay rights movement in the U.S., represented by groups such as the Mattachine Society, founded in Los Angeles in 1950 by Harry Hay, and the Daughters of Bilitis. If the film has a pre-eminent hero, it’s Frank Kameny, a Harvard-trained astronomer who, in 1957, became the first person to protest being fired because he was gay, and went on to help lead a movement based on crucially shifting the argument from national security to civil rights. Kameny’s courage helped lay the groundwork for the legendary 1969 uprising at New York’s Stonewall Inn, the 50th anniversary of which is being celebrated this month. 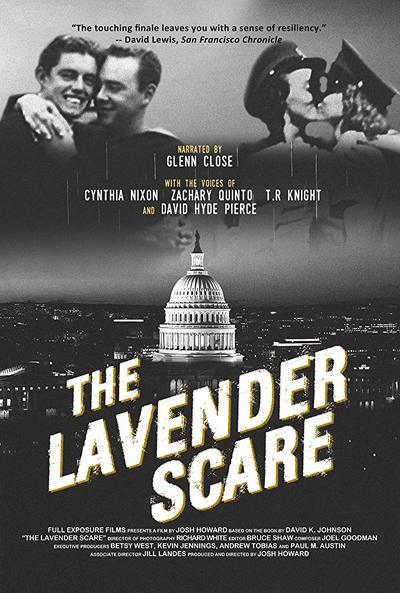