A group of barely-there characters are on a collision course with each other that feels more like a slog in “The Last Son.” Director Tim Sutton, working from a script by Greg Johnson, offers some striking visuals and a couple of compelling performances. But for the most part, this high-concept Western is too much of an empty drag to ever grab you.

Sam Worthington stars as Isaac LeMay, a notorious outlaw who receives a disturbing prophecy from a Native American elder in the late 1800s Sierra Nevada: One of his children will murder him. Since he’s a killer himself with a propensity for prostitutes, the potential culprit could be any number of people, so he decides to roam the land hunting down and taking out his offspring. You know, just to be safe. Worthington, the Australian star of “Avatar,” does plenty of scowling and staring into the distance from beneath his bushy beard and ratty fur coat. In case we didn’t realize he was a bad guy merely from his mission, one character repeatedly shrieks: “He’s the devil! The devil!” But Worthington has also altered his rich, resonant voice, instead speaking with the high-pitched rasp of a much older man, which is a distracting affectation.

One of LeMay’s last remaining children is as much of a ruthless criminal as he is: Machine Gun Kelly’s Cal, a bank robber whose temper can quickly turn from cheery to violent. The lanky actor/rapper, whose given name is Colson Baker, has an undeniable screen presence and swagger. But in a truly eye-rolling move, his character actually fires a machine gun not once but twice. While LeMay is looking for Cal, Cal’s mother, Anna, pleads with him to be merciful from the brothel where she’s long worked and lived. Heather Graham is stuck playing the clichéd prostitute with a heart of gold, but her performance and delivery feel too contemporary and out of place within this 19th-century setting.

Also searching for LeMay are various bounty hunters as well as a reserved sheriff (Thomas Jane) with a mysterious past who happens to have his own history with Anna. And then there’s the rare daughter who finds herself among LeMay’s targets: the quiet Megan (Emily Marie Palmer), who lives out in the woods with her reformed, churchgoing mother and kindly stepfather. Palmer has a directness about her that’s appealing, as well as a natural sweetness that’s much needed within the film’s harsh landscape.

Johnson’s screenplay is broken into chapters, but within each, the story meanders between all these characters as their fates draw them toward each other. For a tale that’s the classically heavy stuff of Greek tragedy, “The Last Son” offers woefully little suspense or momentum. Everyone involved is taking their time, which at least allows us to appreciate some particularly scenic vistas or the dramatic contrast of a campfire in the midst of a snowy forest. (David Gallego is the cinematographer.) But the lethargic pace does little to make us care about who lives or dies, or whether the prophecy ultimately will come to fruition. Quick, loud bursts of gunfire punctuate the stillness, as do the dark chords and light plinks from Phil Mossman’s piano-heavy score, but these are more annoyances than the source of genuine thrills.

Eventually, James Landry Hébert arrives and livens things up as Grayton, a member of the Willets gang, who joins Cal’s quest to kill his father before his father kills him. Hebert has a playful, puckish way about him, and his character’s pleasingly chatty nature is a welcome respite amid the brooding loners. He’s so charismatic, you’ll wish he’d been along for the ride all along—but by then, it’s too late. 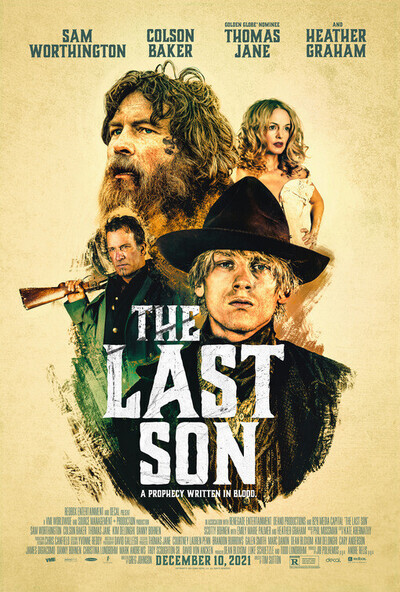 Rated R for violence throughout, some sexual content, nudity and language.