The Last of Robin Hood

A title as good as "The Last of Robin Hood" deserves a better movie. In fact, it deserves a good movie.

That's a shame. If you were fantasy-casting this story of the sad final days of Errol Flynn—who became an international star in 1938's "The Adventures or Robin Hood" and died in 1959, reputedly in the arms of a much younger woman—you might not come up with a better group of actors than the one assembled by the film's writing and directing team, Richard Glatzer and Wash Westmoreland.

As the aging but still insatiable Flynn, we have Kevin Kline, who often had a slightly swashbuckling air about him—and a mischievous, a times mad gleam in his eye; they've dyed his hair and youthed him up just a bit with makeup, but he's physically a ringer for Flynn during the period covered in this film, the mid-to-late 1950s. Dakota Fanning is appropriately innocent and then conflicted and ultimately haunted as Beverly Aadland, the chorus line extra that Flynn selects as a concubine and aggressively pursues. Susan Sarandon surely knows a thing or two about the kind of male behavior exhibited by stars like Flynn; she was packaged as a bombshell in her twenties. But you'd never know that from the committed way she plays Beverly's mother, Florence, who'd probably have put her own fame fantasies and monetary goals ahead of her daughter's mental health if she hadn't been conditioned to think that a young woman's first job is to land a successful man and subordinate her identity to his. The supporting roles are filled out by capable character actors, including Bryan Batt (Sal on "Mad Men"), Jane McNeill ("The Walking Dead") and, in a bit part, Max Casella as Stanley Kubrick during his pre-"Lolita" phase.

The problem—and wow, it's a big one—is that none of these actors have material firm enough to shape into a bona fide performance. The characterizations and dialogue are so early-90s TV-movie bland that not only can you not say that Kline is giving a good or bad performance, you can't even accurately describe what sort of performance he's trying to give. His Flynn consists of nothing more than handsomeness and a dashing grin and a charm that soon turns oily. As Florence, Sarandon is stuck in a one-note predatory stage mom part, with Fanning's Beverly as the prey. If special Oscars were given for Outstanding Performance in an Underwritten Role as an Abused and Self-Deceiving Young Woman, Fanning would be a lock to win it, but that's not the same thing as saying that the character is worth spending time with, or that the performance has much to do with the character as conceived by the filmmakers (she's mainly a collection of misfortunes wrapped in an array of splendid outfits).

Nor is it possible to discern what, if anything, the filmmakers are trying to say about the sexism practiced in Hollywood then and now, and encoded in Hollywood's fantasies then and now, or the role that women like Florence played in perpetuating and validating the predatory practices of male movie stars, producers, studio heads and the like (she all but pushes her 15-year daughter into the arms of a man who was middle-aged when she was born).

Nor does it seem to have any clear point of view on the fact that the movie star's first sexual encounter with Beverly is a rape. It's fine, from a dramatic standpoint, that Beverly fails to recognize it as a rape, and falls in love with Flynn anyway; their relationship was complicated, as they say now, and she was a naive kid, and it was a different time— one in which people did not always recognize flagrant abuses of power as such, and instead chalked them up to The Way Things Sometimes Are. What's not fine is that, by failing to think clearly about what happened, the movie's muddled storytelling takes a 1959 point-of-view on Flynn's exploitation of Beverly, treating it as just something that happened on the road to their troubled but still real love. It's not necessary to condescend to the recent past by asserting that current values are morally superior, but it would've been nice to see some recognition, preferably subtle, of the difference between how we'd characterize the rape now versus what the characters delude themselves into calling (a "seduction"). We're left thinking that the couple did all right considering the age difference and a rocky first date.

The movie's point-of-view on the totality of the central relationship is just as bereft of wisdom. Although "The Last of Robin Hood" knowingly compares itself to Vladimir Nabokov's "Lolita" by having Flynn take a meeting with Casella's Kubrick, who adapted the film in 1962, it's just not in the same weight class as the novel or Kubrick's adaptation of same. "Lolita" had a buoyancy and irony and a boundless spirit of invention, plus a sense of the difference between how people describe their lives and what their lives actually amounted to. In comparison, "Robin Hood" is numbingly prosaic. You're just watching an aging sleaze take advantage of a 15-year old girl while her mother reaps whatever benefits she can. The movie offers no insight, no tragic poetry, no startling yet strangely right filmmaking touches, to compensate for the tawdriness. It's just a straightforward account of people enduring or creating misery.

There are many more failings, including a substandard budget (for a period picture) that could've been used imaginatively but instead seems stretched way, way too thin, and pedestrian storytelling, starting with a flash-forward announcing Flynn's death and then working through the fall-from-innocence storyline in a tediously literal way. "The Last of Robin Hood" is only worth seeing if you're fascinated by the sight of superb actors trying to make bricks without straw, as it were, and failing. This film is both sad and saddening. It could have amounted to so much more. 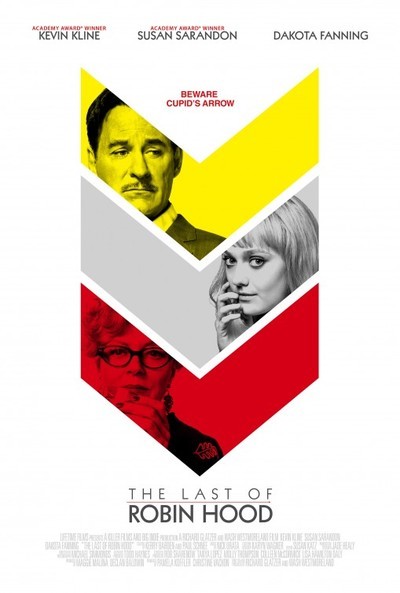