“The Last Full Measure” covers the 1999 battle to obtain the Medal of Honor for deceased Air Force Airman William Pitsenbarger. Killed in combat in one of the bloodiest missions of the Vietnam War, Pitsenbarger saved many lives but was awarded what his family and the men he saved and served with considered a lesser commendation. We’re told that of the thousands of vets who have received the “MOH,” as the characters here call it, only 18 of them hailed from the USAF. Pitsenbarger was not even supposed to be on the ground; he was in a chopper with his fellow airmen airlifting the wounded until the company below lost their medic. After assisting the wounded on the ground, Pitsenbarger defies an order to return to his aircraft, opting instead to seal his fate by engaging in combat to cover the remaining company men.

Writer/director Todd Robinson spins this tale of heroism with a lot of purple sentiment but surprisingly little of the jingoism expected from a film like this. Instead, “The Last Full Measure” spends much of its runtime examining postwar post-traumatic stress disorder and the survivor’s guilt that accompanies it. Running underneath this is a subtly rendered current of anger over the way veterans are treated once they come home. These ideas are presented by a cast of well-seasoned actors who help the film survive its occasionally clunky dialogue. In fact, one of the film’s bigger pleasures is listening to these thespians plow through their numerous monologues. Their performances are the film's saving grace.

Sensing that his film might sink to more maudlin depths, Robinson presents an audience stand-in who represents the level of cynicism needed to balance out his story. Scott Huffman (Sebastian Stan) is three months away from losing his current cushy government position due to the resignation of a higher-up. To keep him busy until then, his boss Carlton Stanton (Bradley Whitford) assigns him the case brought up by Tulley (William Hurt), the airman who sent Pitsenbarger into the jungle on the day he died. Stanton thinks Tulley’s request will die on the vine—upgrades of medals were practically unheard of in the military—and even if it has staying power, the government will prolong any actions well past Huffman’s tenure. Huffman treats the job with some disdain, but Tulley is not only persistent, he’s wily. He earns an ally in Stanton’s boss by presenting his case at a mens’ room urinal. In one of the few scenes of humor, Tulley offers up a handshake while the other guy is quite obviously indisposed.

Hurt is the first of several familiar faces “The Last Full Measure” pulls out like aces from a stacked deck. Christopher Plummer and Diane Ladd show up as Pitsenbarger’s parents Frank and Alice, and the men he saved are well played in their present-day incarnations by Ed Harris, John Savage, Samuel L. Jackson and Peter Fonda in one of his last roles. Each is given a flashback sequence and some of that aforementioned ripe dialogue. I began to tire of the flashbacks—they’re not bad, they’re just repetitive and would have been more effective presented as one major set-piece rather than interspersed throughout for unnecessary suspense—but my interest in those monologues never waned.

In his few scenes, Fonda is especially good. His Jimmy Burr is a still-traumatized man who has slept during the day for 32 years due to his unshakeable fear of the night. His protective wife Donna (Amy Madigan) sees right through Huffman’s insincerity when he comes to interview Jimmy, warning him that this vet does not suffer fools gladly. Jimmy Burr is the type of character who can easily be overplayed, but Fonda finds the right note between stoicism and madness that is truly haunting. Burr punctuates every sentence he speaks to Huffman with “sir,” and the way he says it hovers somewhere between an affectation and a threat. He even sells one of the movie’s pulpiest lines with gusto: After Huffman asks if Burr’s gun is loaded, and receiving a demonstration of the affirmative, Burr yells “an unloaded gun is just a stick!”

Jackson is also very good here as Takoda. Like Fonda, he walks a fine line of menace without going over the top. At first antagonistic toward Huffman, Takoda gradually warms to him once he realizes that this may be the last chance for cancer-stricken Frank to see his son earn the MOH before he dies. Takoda and Frank share a scene of quiet power where the former, in a state of guilt-stricken grief over a specific battle incident, calls the latter and can’t bring himself to speak. This is apparently a common occurrence. “Did he say anything?” asks Alice. “He never does,” replies Frank. Takoda and Tulley most strongly represent the film’s examination of survivor’s guilt and both are given scenes that reflect their anguish.

You may have noticed that I’ve said very little about William Pitsenbarger. “The Last Full Measure” misses the opportunity to flesh him out, to give us more insight into who he was. As played by Jeremy Irvine, he is certainly heroic and the actor’s good looks and affable manner serve as a form of cinematic character shorthand for someone for whom we should root. But he’s mostly defined by the tales told by everyone else and as such remains a mystery held at arms length. This may have been Robinson’s intention, to keep him a bit enigmatic as a form of respect, but I wish I could have spent more time hearing from Pitsenbarger directly. Without that, he feels like a ghost haunting his own story. 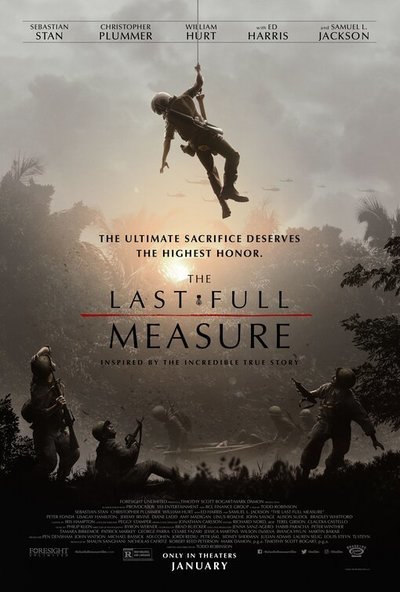