The Lady in the Van

Before watching “The Lady in the Van,” be forewarned that you're about to be subjected both verbally and, more regretfully, visually to the none-too-tidy lavatory habits of an elderly British vagrant who resides in her vehicle and rarely has an actual bathroom at her disposal.

The upside is that said lady is brought to life by the magnificent Maggie Smith, who has previously inhabited this hygiene-impaired creature described as “an odoriferous concerto” and primarily known as Miss Shepherd to acclaim both on stage and radio. Thankfully, there is more than a dash of Dowager Countess imperiousness lurking in this churlish ancient street urchin wrapped in dank glad rags whose face sticks out from under sundry second-hand caps and scarves like a shriveled apple doll version of E.T. She fully expects, nay, demands to be catered to by strangers, and can’t be bothered with such niceties as “please” and “thank you.” Her reaction when a resident of the nouveau-riche North London enclave—where she has staked her claim—stops by to bestow Christmas gifts upon her? “Shut the door,” she bellows while reclining among the scattered detritus of her four-wheeled abode. “I’m a busy woman."

At the very least, you do have to admire both her unmitigated gall and survival instincts. Miss Shepherd, whose antics are mostly based on fact, has mastered the art of preying upon the liberal guilt in the artist-laden borough of Camden. The only one who dares call her out on her "woe-is-me" manipulations is a market vendor (James Corden in a cameo). “Chin up love – we’ve all got to go sometime.” He then adds rather snidely as she passes by, “Smells like you already have.”

But no one falls under her sway more than Alan Bennett, the Oscar-nominated screenwriter of 1995’s “The Madness of King George.” He once again collaborates with director Nicholas Hytner (they also did 2006’s “The History Boys”) while adapting his own play about how this titular interloper ended up residing in his driveway for 15 years in the ‘70s and ‘80s. He also is the source of not one but two characters—Bennett the scribe and Bennett the man, one handling the writing details, the other his life—who sarcastically goad one another like an old married couple.

As portrayed by Alex Jennings, the bespectacled Bennett is a fuss-budget cross between Truman Capote (the high-pitched vocal mannerisms especially) and Elton John. His peevish presence takes perhaps too much time away from Smith, as her character’s fascinating backstory leaks out in dribs and drabs, starting with an opening scene where a fatal car accident compels her to go undercover. When she spies a travel guide about France during one of her brief jaunts into Bennett’s quarters and suddenly begins to speak French fluently, the writer discovers there is more to this wretch than he suspected.

But as Bennett candidly admits in his voiceovers, he and Miss Shepherd mutually benefitted from her presence in front of his house, despite the occasional run-in with bodily waste. He provided her with a safe and legal haven while she acted as his muse, providing endless humorous material with her rude interactions with the outside world. When a fellow churchgoer follows her into the confession booth and recoils from the scent she has left behind, the priest helpfully offers, “There’s an air freshener behind the Virgin.” After observing the nightly trail of attractive young men who pass by the van on the way to Bennett’s door, she tells him conspiratorially, “I know what they are – they’re communists! That’s why they come out at night.” The homeless woman also acts as a stand-in for his own sweet mum, who ends up in a nursing home after her mental faculties begin to fade.

There is a deeper purpose on display as this odd couple go about their business that, for the most part, helps to keep the proceedings relatively free of cheap sentimentality and twee overload. In this season of giving, “The Lady in the Van” provides an interesting take on the very act of charity and how our desire to do good often benefits us as much if not more than it does those in need. While the film is no “Spotlight” or “Philomena,” it does cast aspersions against the Catholic Church as its less-than-benevolent past dealings with Miss Shepherd are revealed.

Still, Bennett’s script overestimates how enthralling his doppelgängers are compared to Smith’s note-perfect portrayal. He also inserts a rather distracting device in the form of Jim Broadbent as a ridiculous Javert-like blackmailer who regularly shakes down Miss Shepherd for money. The ending is botched by a sudden flight of divine fancy and also some needless meta business involving his actual self showing up on screen.

But for anyone who adores Smith—which is pretty much everyone these days—they will have quite a satisfying ride with this crusty grand dame behind the wheel. 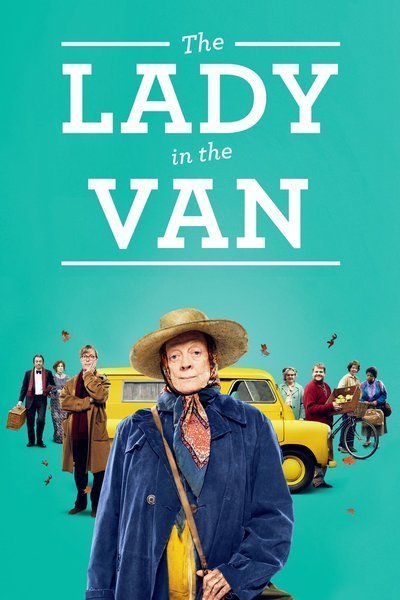