The Killing of Kenneth Chamberlain

On November 19, 2011, Kenneth Chamberlain took off his medical alert necklace at around 5:30am in much the same way so many of us hit snooze on that first alarm. Half-asleep, he didn’t realize that he had triggered it, and slept through the call from LifeAid asking if he actually needed assistance. Assuming that he did, the company contacted the police in White Plains, New York to do a welfare check. Chamberlain would be dead by 7:00am. His tragic final hour is captured in David Midell’s acclaimed “The Killing of Kenneth Chamberlain,” recently released on VOD after a successful fest run and now on HBO Max as of today. It’s a stunning showcase for the great character actor Frankie Faison, who conveys Chamberlain’s confusion and terror with palpable empathy and honesty. Playing mentally ill people in danger is an invitation to over-act, but Faison digs deeper to find the truth of what happened to this man and how scared he was just before he died. Some of the choices made by Midell don’t work, including loud sound cues and choppy editing, but Faison keeps us riveted with the story of a man who didn’t have to die.

It starts simply enough as three officers respond to the LifeAid call. All of Midell’s film takes place in the hall just outside Chamberlain’s apartment and the resident itself, and it mostly unfolds in real time. One of the officers, a man named Rossi (Enrico Natale), seems to sense that they should just listen to Chamberlain’s pleas for them to leave, but he’s mocked by the other two officers, Parks (Steve O’Connell) and Jackson (Ben Marten), who insist on opening the door. Parks becomes convinced that Chamberlain isn’t opening the door because he’s hiding something, possibly even a victim of a kidnapping, although it also feels like this is the kind of guy who doesn’t like being told no and he’ll make up a story to justify the unlawful entry.

The officers keep pounding on the door, even as Chamberlain gets LifeAid to cancel the call. If anything, it almost feels like Midell lets the cops off a little easy. When one drops a racial epithet, others act shocked, but a closing credit reveals that this wasn’t uncommon for these officers—one can even be heard in audio of the event—and the presentation of Rossi as “The Good Cop” feels a little manufactured.

Thankfully, Midell convinced Frankie Faison to play the title role, one that has already earned him a Gotham Award nomination for Best Actor. Watch his body language—how he physically tenses up under pressure or the way he takes a deep breath and pauses before trying to communicate what he needs. Faison clearly talked to people with PTSD and other conditions; his performance doesn’t feel like a cheap mimic. It’s heartbreaking. If anything, I wanted Midell to trust it more, not resorting to loud sound cues to convey his trauma when it’s right there in Faison’s terror-filled eyes and quivering voice.

Recent headlines and initiatives have emphasized how often a police response is not the right one. Officers aren’t always trained to deal with people with mental illness and the habit of falling back on force instead of reason can lead to tragedy. The story of Kenneth Chamberlain is a perfect example of this in that mental health professionals could have told the responding officers that turning up the pressure on someone with deep PTSD and possible bipolar disorder would only terrorize him. Midell's film started very small—its fest premiere was back in 2019—but the Gotham nod and the HBO Max drop should bring it to a wider audience. This is a story that deserves to be heard.

On VOD and HBO Max now. 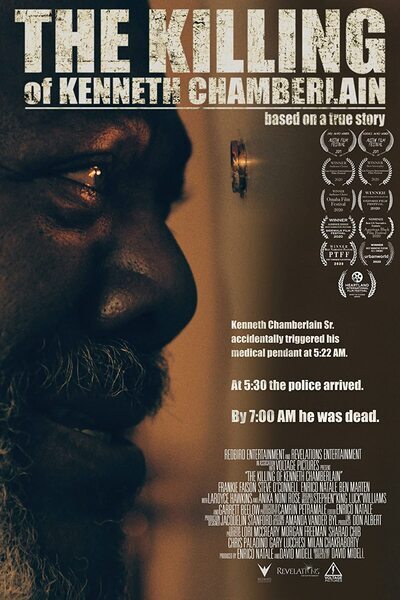 The Killing of Kenneth Chamberlain (2021)