The Kid Who Would Be King

I have good news and bad news for anybody who is (as I was) looking forward to "The Kid Who Would Be King," the latest film by British writer/director Joe Cornish. The bad news is a little complicated. Cornish has essentially transplanted "A Kid in King Arthur's Court" to a modern-day post-Brexit England. This isn't theoretically a bad thing, but it is practically (and frequently) a problem when so much of the film's action is halted by arch expository dialogue. Cornish's gift for character-driven action—amply displayed in his fleet, modestly scaled 2011 sci-fi action-comedy "Attack the Block"—is, in that sense, often subordinate to his prevailing need to establish the emotional stakes of his over-inflated, but cheery allegory about the importance of inclusivity and turning the other cheek. Luckily, there is some good news, too: Cornish's gift for working with child actors is still apparent, as is his knack for dynamic action set pieces. "The Kid Who Would Be King" is not, in that sense, everything that it could have been. But it is fun where it counts and that's realistically what matters most.

The film suffers from Cornish's blocky and plentiful dialogue. Much of the plot is related verbally and often by endearingly hopeful kid hero Alex (Louis Ashbourne Serkis). Alex tells us—and other characters—that he's the kind of 12-year-old who sticks up for his loyal but helpless best friend Bedders (Dean Chaumoo), even if it means making himself a target for harassment by 16-year-old bullies Lance (Tom Taylor) and Kaye (Rhianna Dorris). Alex also has a code of honor, as we see when he, in a rare moment of silence, clams up after his never-named mom (Denise Gough) asks why he didn't tell the school's out-of-touch principal (Noma Dumezweni, doing a fine job in another pivotal but unnamed role) that he’s being bullied.

You can see why Cornish loves Alex just by looking at the way that Alex refuses to defend himself or even cry to his mother: Alex has grown accustomed to a world where might does not make right and where empathy is in short supply. He ultimately does not want to defend himself against Lance and Kaye, even if they are snotty bullies who initially can't stand Alex or his immature heart-on-his-sleeve declarations. That makes Alex a perfect Arthurian surrogate—somebody who leads with a firm hand, even when circumstances are a bit wobbly—and therefore somebody who deserves to wield Excalibur, train with a flighty teenage version of Merlyn (Angus Imrie), and lead a rag-tag group of adolescents against a newly revived Morgana Le Fay (Rebecca Ferguson), an evil sorceress who has waited for centuries to take over England after Arthur, her brother, and his knights initially defeated Morgana.

If that last sentence wore you down: boy, are you gonna be tested by "The Kid Who Would Be King." Serkis (son of Andy) does a fine enough job with the role he's given, even if much of that role is as a Thankless Plot Dispenser. He talks so much that you wish he would just fight somebody, anybody. The same is true for most members of Cornish's decent, but overwhelmed ensemble cast. Imrie—who has a rare gift for delivering goofy, tedious exposition with campy panache—is the exception that proves this general rule.

Luckily, the film’s bright spots are pretty bright. A dialogue-light training montage—where Alex leads his team in sparring with sentient trees(!!)—is especially good, as is a nightmarish post-dream sequence involving a demonic skeleton knight (this scene brings to mind the original 1953 sci-fi chiller "Invaders from Mars"). Even a handful of key emotional scenes work, mostly because Cornish knows how to let his actors’ body language and facial expressions speak louder than anything that they're verbally saying.

So, yes, "The Kid Who Would Be King" is worth a look, even if it is a bit soggy. Cornish fans will likely get what they hoped for, and uninitiated viewers will probably groove on the film's well-intended and clever ideas. "The Kid Who Will Be King" may also lead some younger viewers to fall down a deep rabbit hole of Arthurian fables and cheapjack fantasy flicks. I envy those kids, and hope that they find this movie however they can. 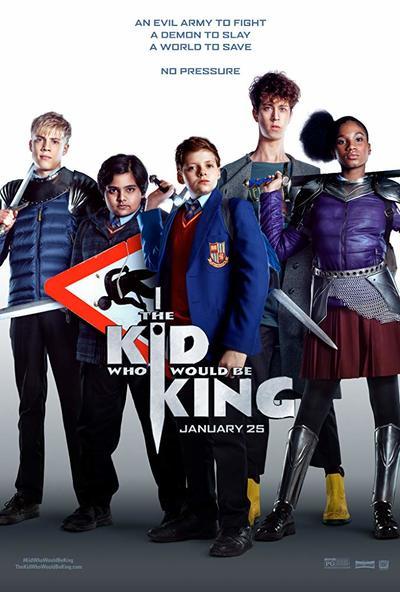